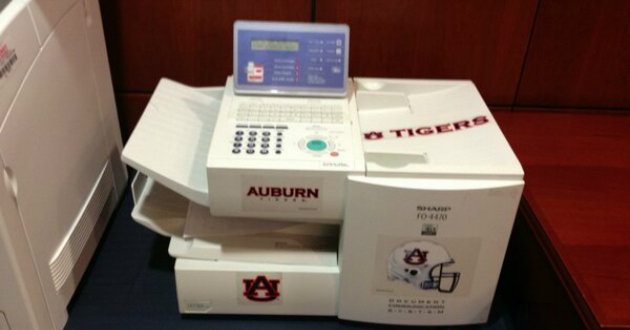 For the TENTH consecutive year, War Blogle will be THE PLACE to get all of the no-frills Auburn info on National Signing Day. The early signing period has severely diminished the already-waning excitement of the actual National Signing Day, but there’s still some ‘croots to be had. 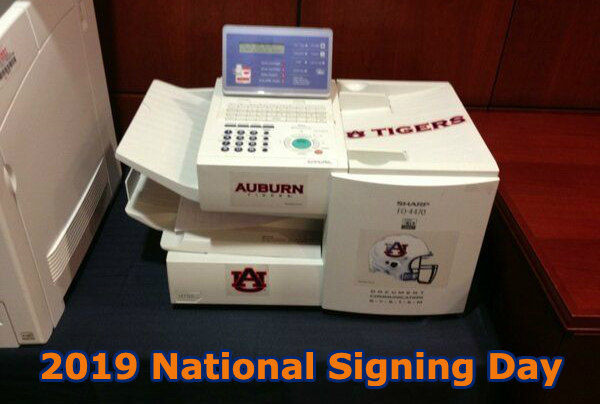 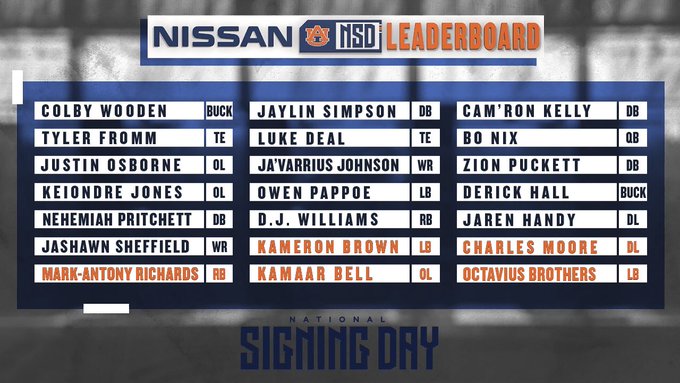 11:00 pm – We wrapped up the day talking about Auburn’s 2019 Signing Class and a few other Auburn things. Give a listen/watch below.

3:10 pm – Octavius Brothers signs with Auburn. He is the last prospect Auburn was waiting to hear from. We will look to Gus for his NSD Presser.

2:15 pm – Ira Henry selects FSU. He will be protecting air as they do not have a QB on the roster.

12:29 pm – Kamaar Bell picks Auburn over Florida State. Could this be a domino for another big OL recruit?

12:12 pm – The Auburn coaching staff was excited about Mark-Antony’s announcement.

11:33 am – 4-star RB Mark-Antony Richards chose Auburn over Florida, Georgia, Miami, and Penn State in front of his school. Big pickup and boost to the class. He whispered to his coach right before he made the announcement. Maybe it was to tell him to hit send on the fax machine because Auburn tweeted about it right when he announced, which means the letter was already in while he was on stage.

11:03 am – Auburn coaches reacting to the Charles Moore commitment

10:20 am – 4-star DE Charles Moore has committed to Auburn. He had been considering Florida, Mississippi State, Florida State, and others. He looks mean. That’s good. You can smile.

9:13 am – LeDarrius Cox flips commitment from Tennessee to Ole Miss. Not sure why.

3-star defensive tackle LeDarrius Cox flipped his commitment from Tennessee to Ole Miss and will become a Rebel on National Signing Day.https://t.co/9H2pHvdJLS pic.twitter.com/tJTv6mkTI7

9:10 am – George Pickens flipped to Georgia. Auburn players aren’t happy. But his Twitter header has been all Georgia for about a month. Oh well…

BREAKING: 5-star WR George Pickens has flipped from #Auburn to #Georgia. Huge get for the ‘Dawgs. pic.twitter.com/Mxva6DRrng

8:04 am – Kameron Brown starts off the day as the first player to send his letter in. Will he be treated like every other freshman, or will his brother be able to protect him? WELCOME TO THE FAMILY!

Given that we already have most of the class signed and in the barn, it only makes sense to split this initial post into three sections: those we have, those that have said they’ll have us, and those that we may have by the end of the day.

Next, we have the guys that have given Auburn their word that they will sign with them on National Signing Day. Kameron Brown, brother of Derrick Brown, is expected to have a ceremony signing with Auburn. George Pickens has been rumored to be on the table to flip, but the Auburn staff is confident.

And lastly, we come to the guys that Auburn has a shot at getting on this hallowed day. More so than last year, Auburn has a chance to make a splash and get some big commitments. A few national recruiting personalities are predicting Auburn to have a big day. We shall see.