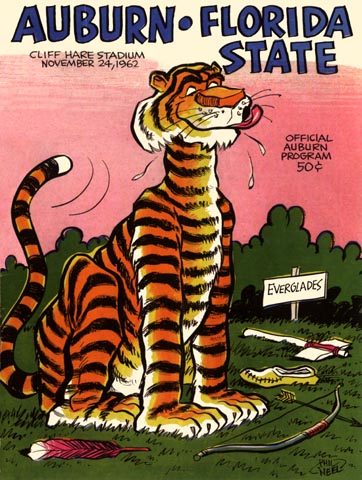 As you’ve heard by now, Phil Neel, the legendary artist and creator of the Aubie cartoon, passed away yesterday at the age of 84. His works were seen on Auburn football programs from the late 50’s all the way until the mid-1970’s, but they were more than just a simple cartoon Tiger noting who Auburn was playing that day. They told a story. Seeing one cover was like reading an entire comic book.

Phil Neel’s Aubie started out as a naked tiger, as all tigers are, who basically growled at and scared the mascot of that week’s opponent. After a few years, he began to walk upright and become more human-like, wearing an Auburn uniform. He also became pretty mischievous with a hardcore sense of pranking. Most would call it downright mascot-slaughter.

I found most of Phil Neel’s collection over at weagleweagle.com and as I traversed through years of program covers, it became apparent that Aubie was a mean character. He didn’t hold back when letting other mascots know who’s boss, kind of like with his mascot championships today.

Living in a day of political-correctness, it was refreshing to see harmless drawings of Aubie cutting a yellow jacket’s stinger off with a pair of scissors or burying a Bulldog alive. It was just fun in the name of rivalry. They remind me of Spy vs. Spy. It shows a time where people didn’t get all bothered by any little thing. It almost feels like the covers are from another world, given what wouldn’t fly today.

I’ve compiled a pretty hearty list of some of my favorites, showing off the skill and wit of Neel, along with the ferocity of our beloved Aubie. Have a look…

Neel was obviously a psychic, as I’ve suggested before, because he knew that the Tennessee Volunteers would come looking for squirrel when they came to play Auburn. They were just about 50 years too early. 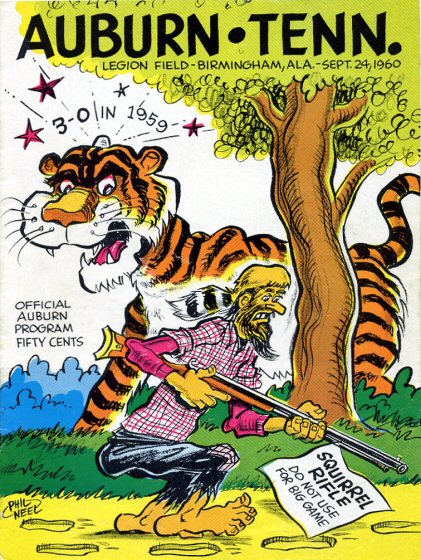 This is one of the first examples of the imposing Aubie. And causing a Seminole to take an arrow directly to the face? I told you Aubie was a bad dude. 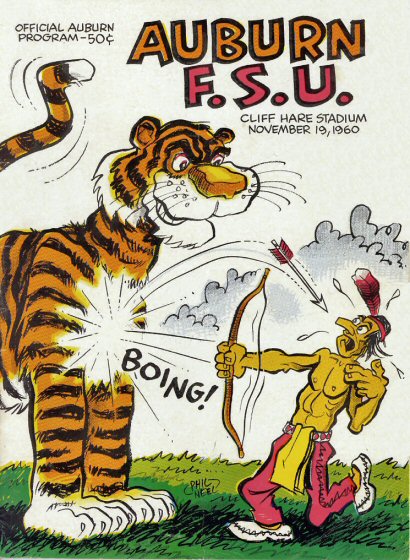 As we continue through the years, you’ll notice that Aubie must have had a huge stash of explosives back in his tiger den. He loved to trick opponents into blowing themselves to bits. 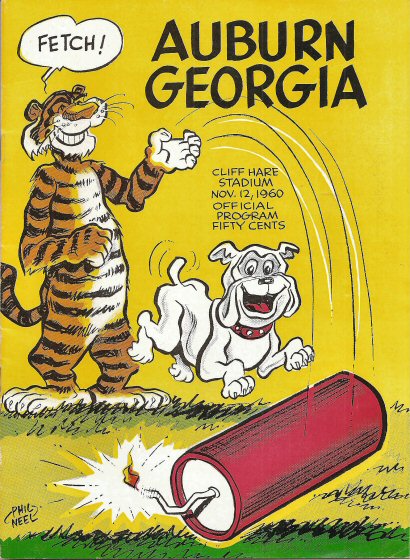 Aubie welcomed “Cousin Clem” to Cliff Hare Stadium with a nice stogie… that blew the purple tiger’s head off. 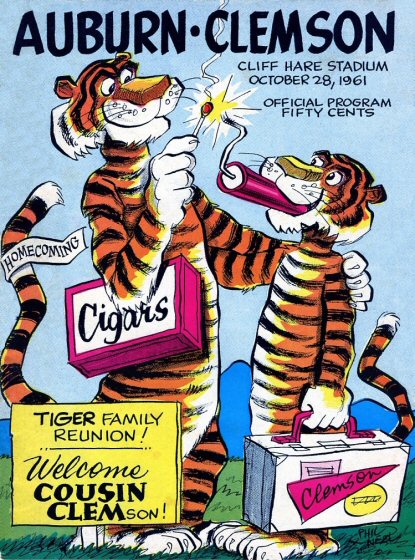 Somebody is going to have to explain this one to me. I must be over-thinking it. It’s too simple just to be Aubie pouring out some “Crimson Tide.” 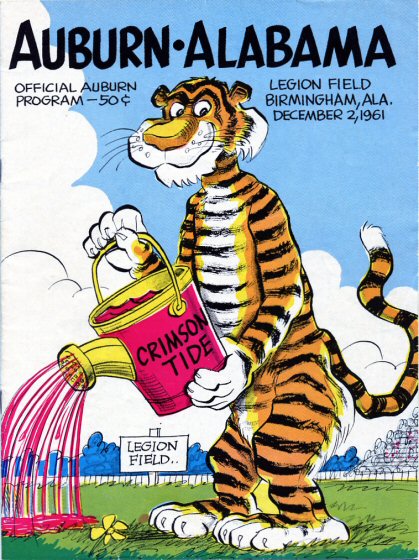 Snake in the grass? Aubie just grinds him up the lawnmower. Fertilizer? 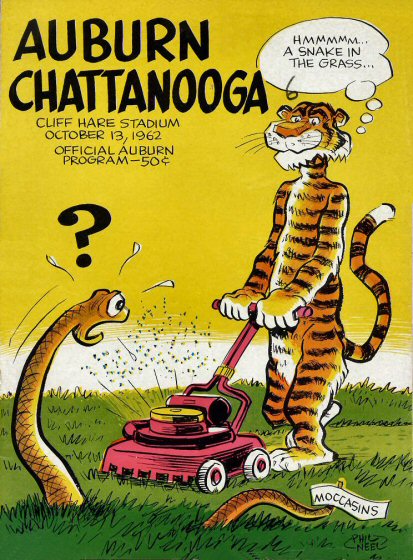 Was this after the natural passing of Bully, the Mississippi State mascot, or did Aubie have something to do with it? It takes some stones to knock somebody off and then sing at their funeral.

Notice the headstone calls them the “Maroons.” Looking at other covers, it appears this was either a harmless nickname welcomed by Bulldog fans, or something Aubie jokingly called them. I’m thinking the latter, so let’s go back to that. 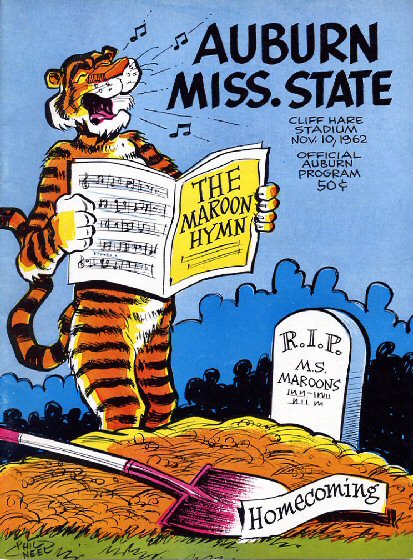 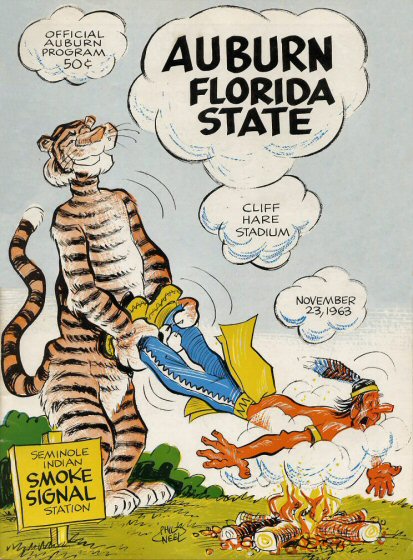 Apparently, in 1963 the Auburn Engineering Department made booby traps that shot unsuspecting kitty cats looking for a good meal. 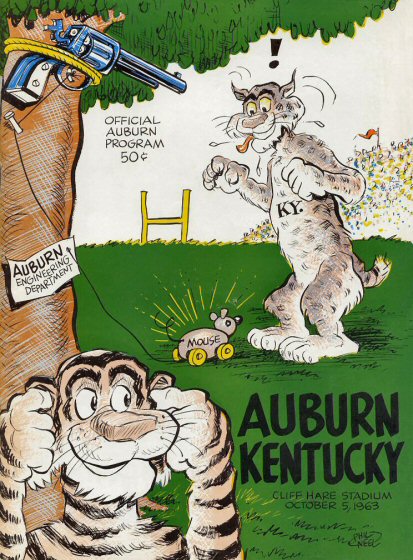 Donning a football uniform didn’t change a thing about Aubie. In this almost mafia-style “prank,” Aubie makes the Chattanooga Moccasin swim with the fishes. 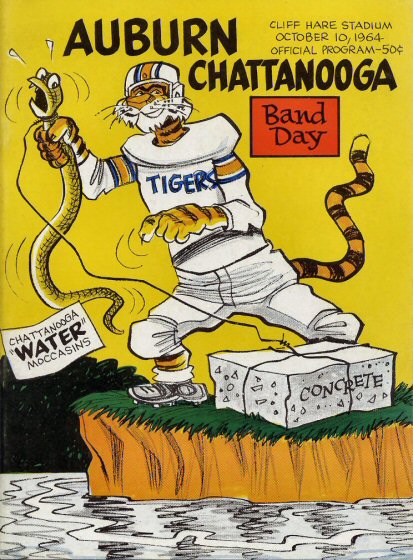 I know this is a pretty touchy subject, but it’s one of the biggest signs of the times of any of the program covers. After doing some research, I found that Southern Mississippi was still a segregated institution in 1964 (they desegregated in 1965, Auburn in 1964). It appears that Aubie is coming down on the “Southernor” (USM’s mascot at the time) and telling him to get with it. I can’t believe this was acceptable ever, but again, it was the times. Aubie, a tiger for all people. 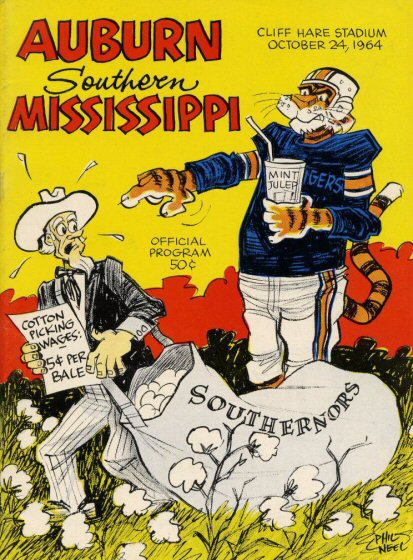 Hey Cousin Clem, welcome to the club. Let me stab this pin through your beating heart. 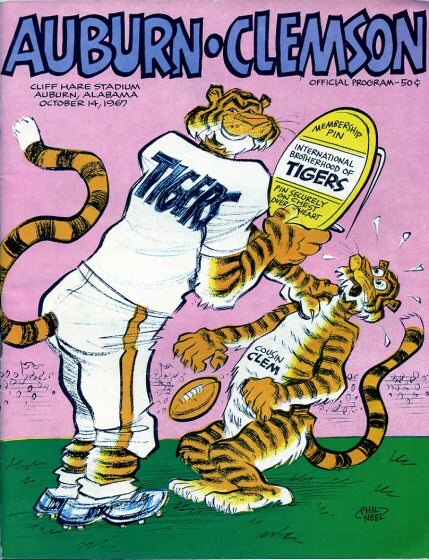 Continuing with the theme of sticking things in others’ chests, Aubie threatens to put a tack through Georgia Tech’s yellow jacket. 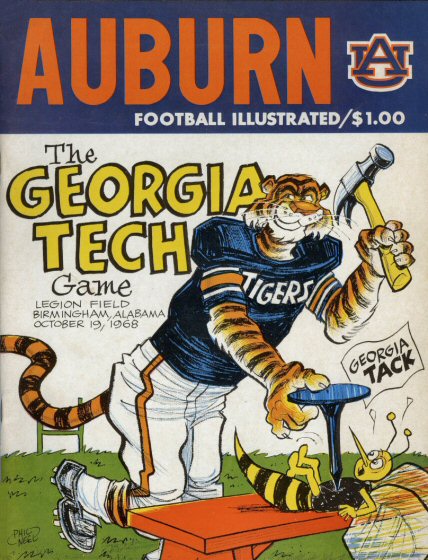 Hey Bully, we’re in need of a few heads in the Veterinary department. You up for it? 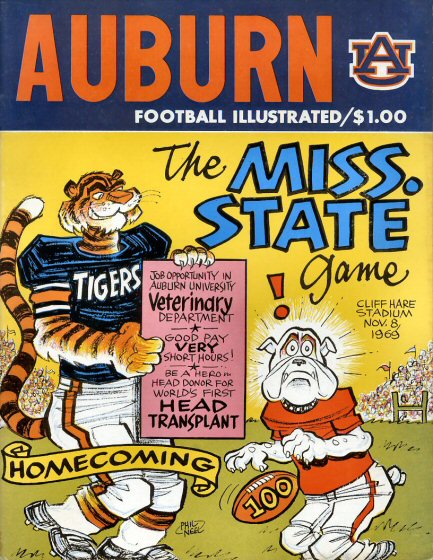 It’s tough to physically harm a body of water, but Aubie feels like blowing it up is good enough. 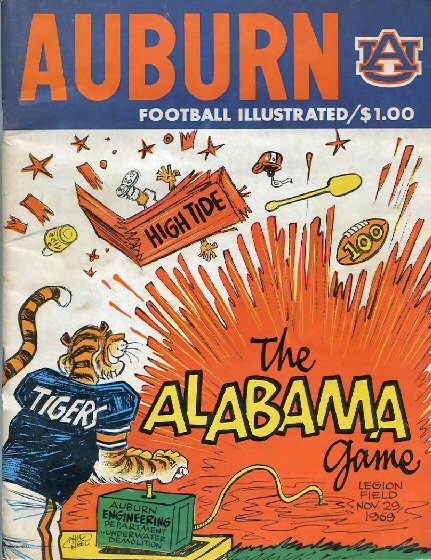 Taking a Tennessee football player and impaling him with a juicer is totally cool, right? 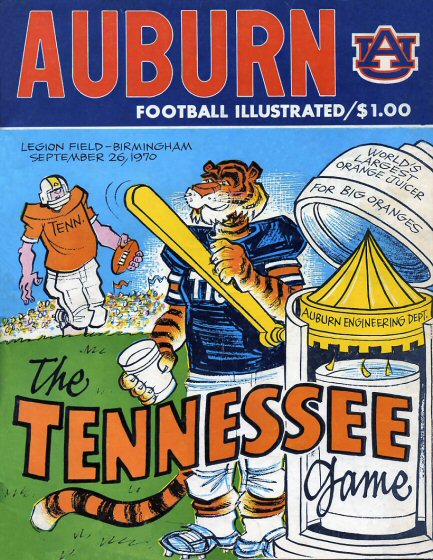 Chattanooga, now using a Native American instead of a snake as their mascot, is about to get stoned by (not with) Aubie. Those stones just happen to have the names of Auburn legends on them. 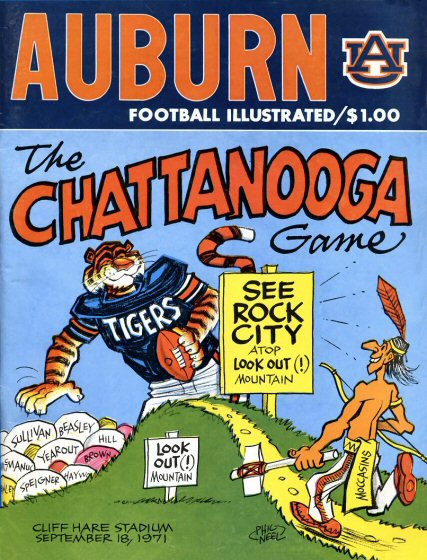 As if stoning them wasn’t enough, why not just nail their shoes to their feet? 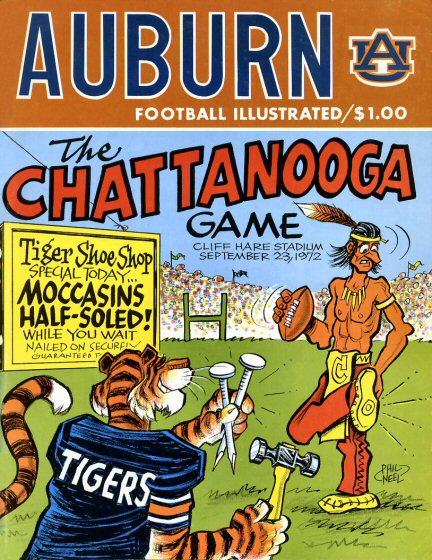 As an aspiring magician, Aubie got a Tennessee Volunteer to agree to a little magic trick. 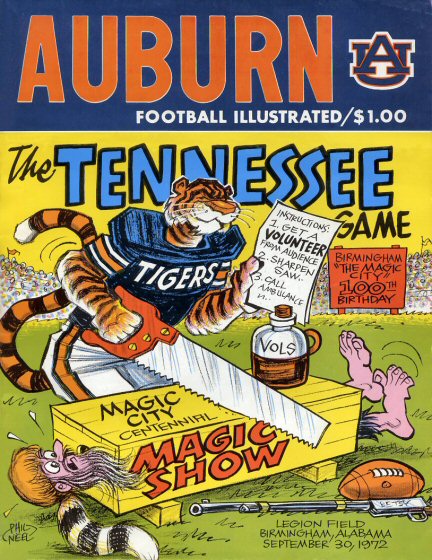 As someone who has had braces, the tools Aubie is holding is a little overkill. 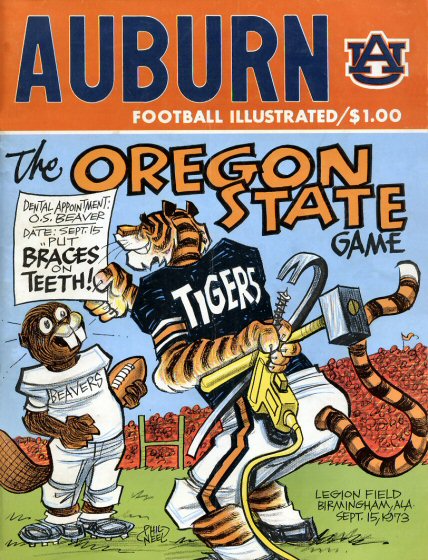 No violence, just a good reminder of one of the top two comebacks in Iron Bowl history. 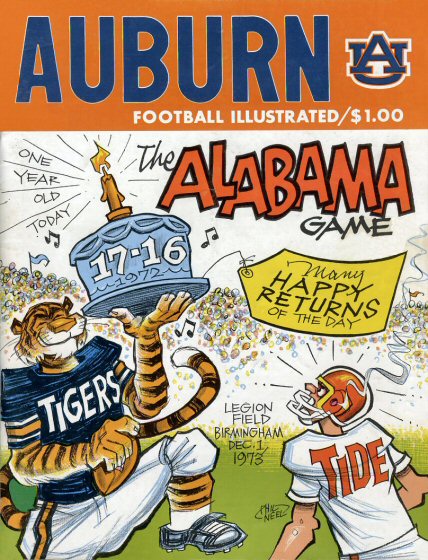 War Eagle I (one) couldn’t have been too happy about this. 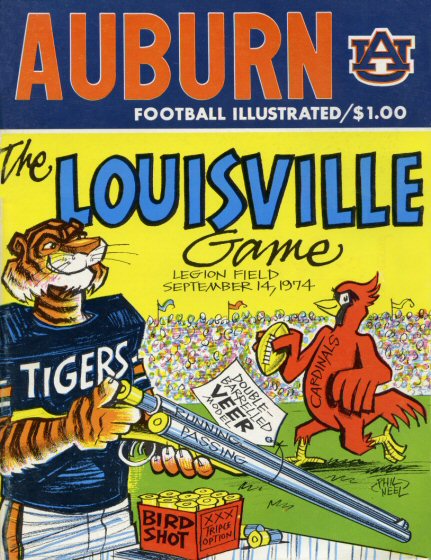 Auburn sure did play Chattanooga a lot. I just thought this one was funny, given Aubie’s sign. 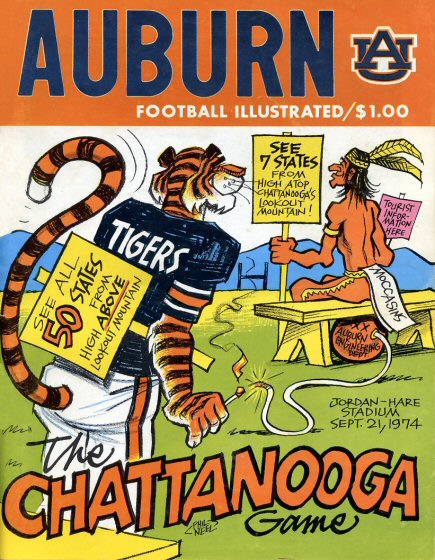 Smoking is bad for you. Aubie just wanted to remind the Seminole of that… with a lead pipe to the skull. 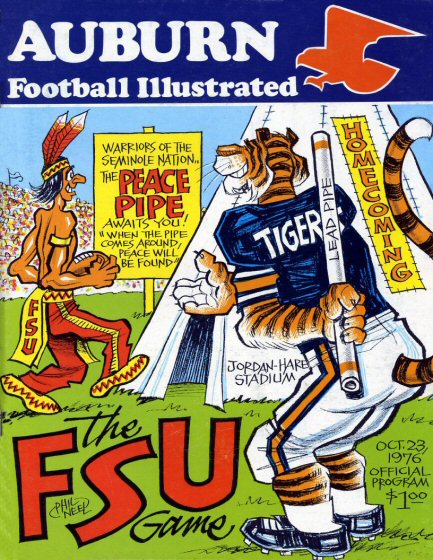 This is probably the most well-known – and nonviolent – piece involving the cartoon Aubie because of it’s significance to the rivalry. 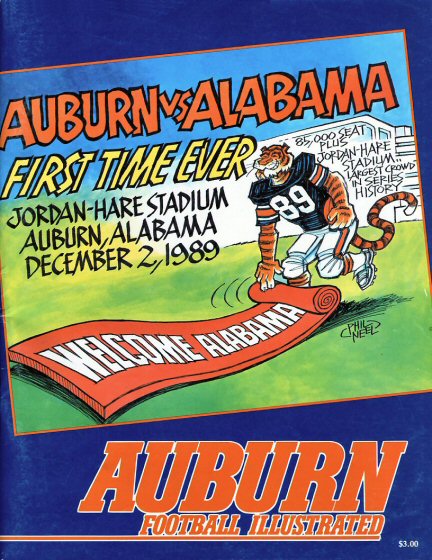 Phil Neel was a great talent and will always be remembered as part of the Auburn Family. He gave us one the most important pieces of Auburn tradition and he will forever be missed.

Corey Grant is Leaving Alabama, Wants to go to Auburn

A “Maroon” was used to label slaves in French Guiana and is derived from the a French word that means ‘feral’ or ‘wild’. Not very PC, but it was coincidentally perpetuated by Bugs Bunny catchphrase’s “What a maroon” (playing off the intentional mispronunciation of ‘moron’) it eventually came to describe a backwards, dim-witted person…which is probably what Neel was going for.

Actually, Mississippi State was called the “Maroons” before being called the Bulldogs. Not sure if the change was made before that or not, but that’s probably what he was getting at.

Mississippi State football was nicknamed the Maroons from around at least the early 1930s, if not earlier, because that was their uniform color. In 1961, the Bulldog became the official title for Mississippi State teams.

The cover is a clever visual double entendre. It can be interpreted both as the passing away of their nickname from the year before as well the hopeful outcome of the game.

[…] late Phil Steele’s great works of art have been well chronicled on this Blogle, but some of his best came on the covers of past Auburn-Florida State game programs. It’s […]

I sure loved Mr. Neel’s programs and I believe he used to do game day buttons also.
Great talent and humor.
RIP and War Eagle Mr. Neel!

[…] mascot was a Native American. I was intrigued (read: horrified) to find these game day programs on WarBlogle which Auburn University released during football season in the 60s and 70s. Although most […]