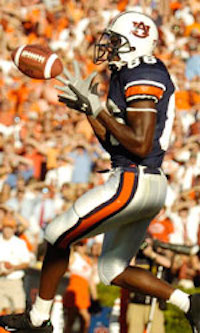 How I Remember It: It was hot and sunny. I sat/leaned against the chain-link fence that separates the student section from the regular seats. There was a hurricane, Ivan, the week before the game that could have possibly pushed the game later into the season, but the show went on.

I remember LSU scoring on their first drive, and then a hard-nosed, defensive battle for the rest of the game. I remember Bret Eddins loosening Marcus Randall’s wisdom teeth. Most importantly, I remember Courtney Taylor and Jason Campbell becoming Auburn legends.

What Really Happened: LSU was coming off a BCS Championship season and was ranked #4 in the nation. Auburn was ranked #15 nationally. Both teams were 2-0 on the season. 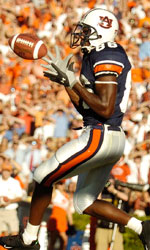 As remembered, the Purple Tigers drove down the field on their first possession of the game ending in a 9-yard touchdown from Marcus Randall to Dwayne Bowe. However, the PAT was missed.

Auburn drove right back down on their first possession, but could only manage a field goal. LSU would add a field goal in the 2nd quarter bringing the score to 9-3, and that would be all of the scoring until less than two minutes left in the game.

With 6:37 left, with the ball on the Auburn 40-yard line, the Good Tigers took the ball and methodically drove down to the LSU 26-yard line. After a 2-yard loss and two incomplete passes, Jason Campbell was faced with 4th-and-12 with the game on the line. He took the shotgun snap, rolled right, and got crushed as he connected with Courtney Taylor who was tackled at what seemed like one inch past the 1st-down marker.

Auburn then went backwards on the next two plays, but on 3rd-and-12, Campbell completed the touchdown pass of his life to Taylor. Not to be outdone by LSU’s special teams miscues, Auburn missed the PAT to keep the score tied 9-9… but WAIT! An LSU defender landed on top of the long-snapper! Personal foul! Re-kick!

The Good Tigers made the PAT this time, Junior Rosegreen intercepted Marcus Randall, and Auburn beat the defending national champions. This win launched Auburn into the national spotlight, and was the first big win of the magical 2004 season.

Why did I pick this game? I shouldn’t even have to answer this. This was the usual Auburn-LSU, I hate you, you hate me, defensive, SEC battle, and the Campell-to-Taylor 4th down conversion and touchdown pass late in the game are two of the top plays in Auburn history. I have never had another headache as bad as the one I had after this game from the amount of screaming I had just done. This is one of my favorites ever, so yeah it’s in the Top 5 at Jordan-Hare.

Fun Fact: The game-winning touchdown was Courtney Taylor’s first as an Auburn Tiger.

Play of the Game: The touchdown was obviously huge, but the 4th-down conversion kept the drive alive and is the reason Auburn had the chance to score.

Player of the Game: Jason Campbell’s numbers weren’t extraordinary, but he managed the game well and gave Auburn the chance to win with two of the best, high-pressure throws, of his career.

Quote of the Game: “It was coming so slow, I was just saying, ‘Come on, get here ball.” – Courtney Taylor

Week 8 Predictions: The West is the Best