I know 2011 still has a few more days until its end, but I don’t see any Earth-shattering posts coming out of me in the coming days. Therefore, I’m going to go ahead and give you my top ten most read posts of the year. This also happens to be my 1000th post on the ‘Blogle so that’s the main reason I’m doing this now. I wanted it to be special.

Let me give you a quick update (brag) on the past year. This year, WarBlogle.com had over 1.5 million hits, up from just over 400,000 last year. That’s probably due to the fact that I never missed more than two days without posting a blogle this year, but still. 1.5 million? I love y’all.

Twitter followership went from around 4,000 to over 16,000. This is my pride and joy. I wish all of those 16,000 were reading the ‘Blogle every day, but I’ll take it. In this “gimme quick news now” world, I guess it should be expected. I know some people just don’t like to read. But seriously, couldn’t all of you just give me a dollar a month? How hard would that be?

Anyway, this was a big and exciting year for me as the WarBlogler, and I will try recap it in a post before the end of the year, though that may happen after New Year’s. For now, here are the top 10 posts. Notice that five of them are uniform related. I know what you guys like.

When I attended Fan Day yesterday (post later), I made a point to check out the jerseys on the players, and sure enough, the ‘War Eagle’ and stars were there. I didn’t get a picture for fear of looking like I was taking a snapshot of their package, but I promise you they were there. No big deal, unless there is some major holding going on and a shirt tail gets untucked, you’ll never see either. Read the rest…

Remember Lache Seastrunk…? You know, the guy that called out Nick Saban during 2009’s Big Cat Weekend that ended up committing to Oregon. Well here’s an interview he did before the BCS National Championship game. It sounds like he would literally kill someone to be at Auburn.

Like most bowls, the Chick-fil-A Bowl alternates the home and away teams every year. This year, it’s the SEC team’s turn to be the home team. Naturally, that means Auburn will be wearing their traditional home blue jerseys. Auburn fans have also been asked to wear blue by the bowl committee. I thought that was somewhat strange, but after the announcement today, it makes sense. 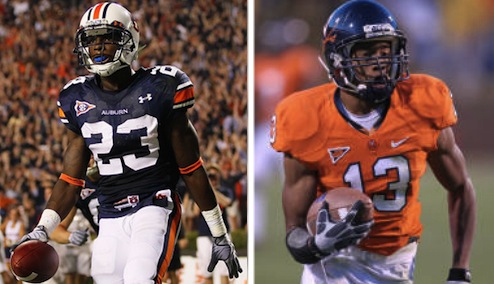 Earlier today, EA Sports announced that ex-Alabama running back Mark Ingram will be on the cover of NCAA 12 (Update: As I expected, all four guys that were in the running will have their own alternate covers). We can be as mad as we want, but it came down to a fan vote and basically Alabama fans wanted it more…or had extra time for whatever reason. My whole argument was that he should have never even been up for the vote, but that’s for another post. What I want to talk about is the promotional screenshots that were released by EA Sports following today’s announcement. 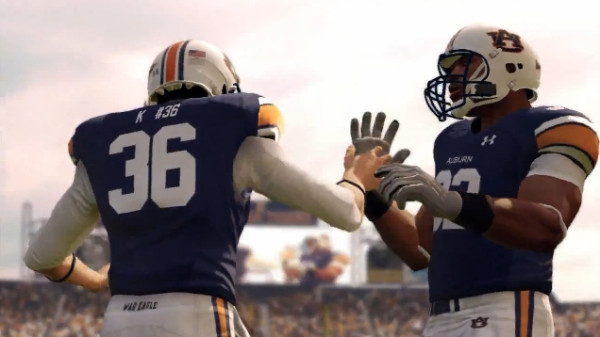 Do you see it? Look right above Cody Parkey (K #36)’s crack. Yep. The infamous ‘War Eagle’ on the butt (belt actually) that I wrote about before the National Championship Game. Read the rest…

A few weeks after Auburn beat Oregon to win the National Championship, a picture surfaced from inside the Alabama locker room that stated “Never Again.” The new team motto was in reference to the collapse/comeback in last season’s Iron Bowl. “Never Again” would they let it happen. Now the Tide have a new saying with the word “never” in it as well.

Earlier this afternoon, a friend from my days at Auburn, who is now attending grad school behind enemy lines, sent me the picture below. The button, being sold at Alabama’s school bookstore, inexplicably states “Never All In.” I’m sorry, what? You’re not all in? You don’t care about the team you pull for? Is that what they are trying to say? 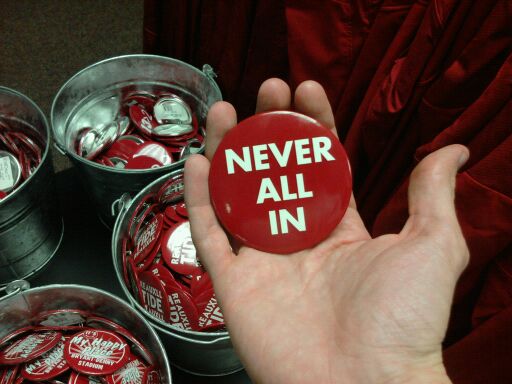 For the past five weeks, Aubie has taken on and taken down each of his opponents in the Capital One Mascot Challenge. Actually, Aubie has done nothing but be his normal awesome self, while the victories have come due to fan votes. This week, a scary little bumble bee backed by the brains of a “Tech” school stands in front of him. 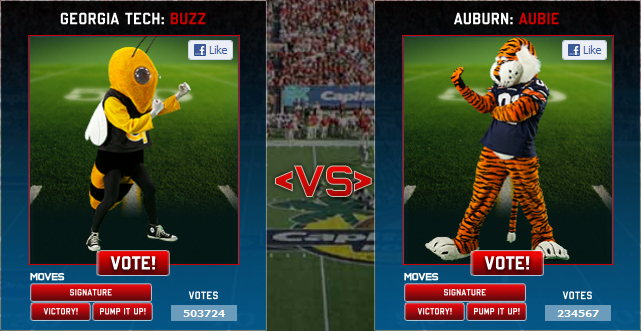 When I checked the votes on Tuesday, Aubie had a nice lead of 3,000 or so. I figured it would be another easy win considering that the Georgia Tech fanbase hasn’t always been the most committed to their athletics. However, when I checked yesterday, Buzz had not only passed Aubie but he had a lead of around 40,000. Read the rest…

We all know how Paul Finebaum works. He has built his show around stirring the pot, creating controversy, and feeding off those that claim they’ll never listen to him again. You can listen one day and he’s all on the Nick Saban bandwagon, and the next day he’s bashing him and all about Chizik. This past Friday, I heard him switch back and forth from one caller to the next, so it’s no surprise as to what he’s doing. Most see it, but those that continue to call do not.

Last week, Finebaum spoke at Birmingham Southern College in front of a couple hundred students and faculty members. The lecture was called “Paul Finebaum: Sports Management.” Are you done laughing yet? No?…ok, what about now? Basically, he argued through innuendo and rhetorical questions to the audience that Alabama was a perfect machine, comparing them to Apple, etc. He then argued that Auburn could be compared to a Ponzi scheme. Some students (more Bama fans not attending Bama) threw out names like Enron, which he agreed with. Read the rest…

Yep, it’s another uniform post (almost a year to the day that the famed blue helmet rumor of last season went large), but this time I’m just being hypothetical. Unless the higher-ups at Auburn were scared enough by what Under Armour made Maryland wear a few weeks ago, there is no chance Auburn will be wearing any Nike Pro Combat uniforms any time soon.

You may or may not remember from last season that the blue helmet rumor was actually preceded by a rumor that Auburn would wear blue pants in the Clemson game. In my post about that rumor, I showed you the Wayne County High School War Eagles who have a very similar uniform to Auburn’s, but with blue pants. 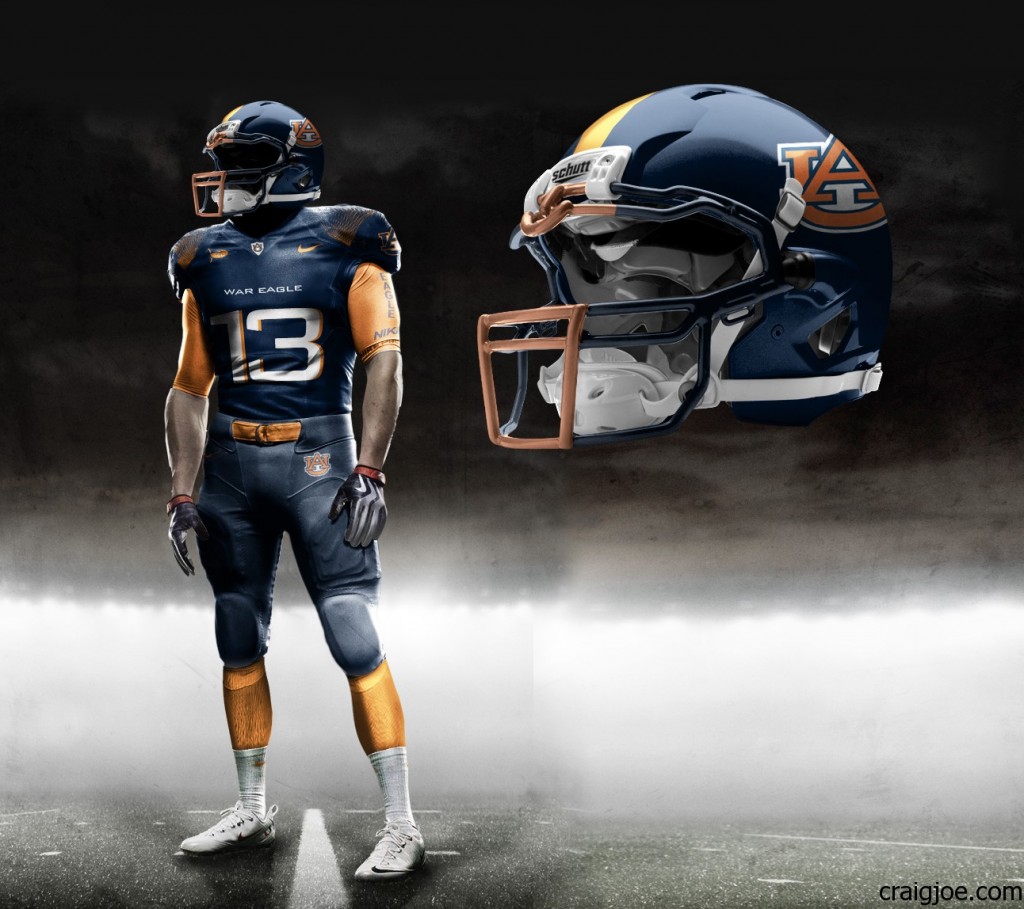 Pssssst, come here. Yeah, you. Keep it down. Just get over here. I got something you wanna see. Seriously though, I’m not sure how long this will be up so watch it quick, and tell all your friends about it. And if you’re thinking about finding a way to gank the video and upload it to your YouTube account, just don’t. That would only lessen the likelihood of you-know-who’s latest and greatest creation seeing another day. Enjoy.

Earlier today, I posted a picture that confirmed a few of the uniform rumors that had been floating around (‘War Eagle’ on belt line, stars on jerseys, etc.). One rumor, that began at Under Armour’s merchandise bus in Glendale, was that Under Armour would be adding white space between the pant stripes to look more like the helmet and jersey stripes. The aforementioned picture squashed that one like a 24-point lead in Tuscaloosa.

But as my friend Stephen A. Smith says… HOWEVA, a new and very strange change has been spotted in a picture that was tweeted by the Auburn Athletics Twitter account. Take a look at Michael Dyer’s knee. You know, the one that didn’t go down in the BCS National Championship Game. What’s up with his pants? Did they run out of fabric? They just need adjusting, right? 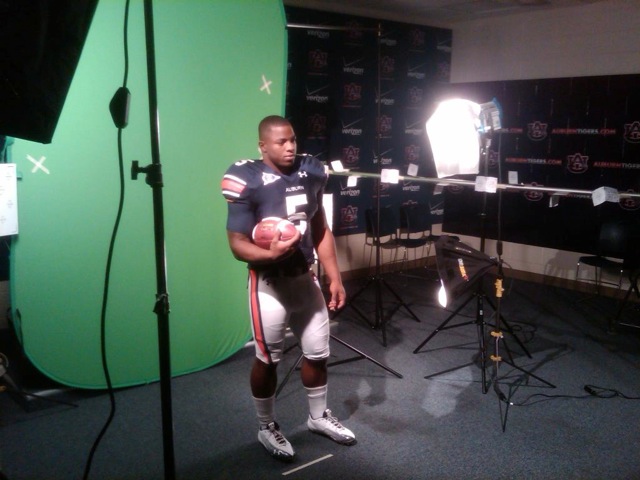 Thanks again for all of your support. I met a lot of goals this year and that could not have been done without you and your loyal readership. <single tear> If you’re so inclined, you can view last year’s top ten here.

Auburn’s Massive New Video Board is On

Congrats, Blogle. That’s a great achievement. Now, keep it up : )

Happy New Year Blogle and congrats on your success … which has been assisted in no small part by the fact that IT’S GREAT, TO BE, AN AUBURN TIGER and you are one of the reasons why! Here’s to another great year. Cheers!

[…] it was last year, my uniform obsession seems to have seeped into your brains and taken a stronghold. Of the top ten […]