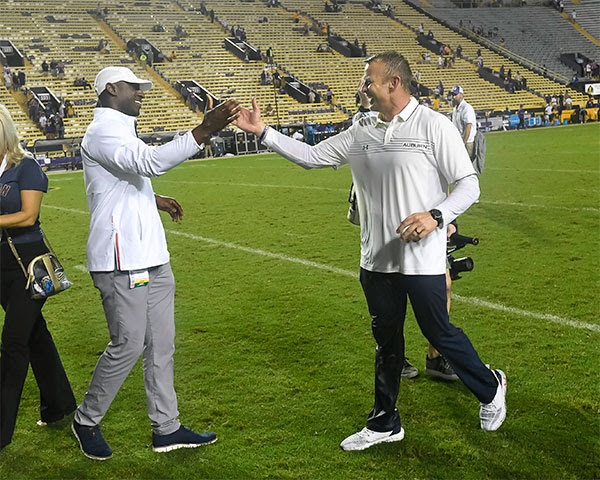 Auburn Athletic Director Allen Greene felt it appropriate to email the Auburn faithful, the Auburn Family, following the win over LSU. He mentions Bo Nix’s performance, and previews a huge weekend on the Plains.

Similar to the Prayer in Jordan-Hare and the Kick Six, I suspect Auburn Family members will long remember where we were when Bo Nix escaped from LSU defenders time and again before throwing a fourth down touchdown pass to Tyler Fromm.

It was one of those plays where we all turned to the person next to us to ask in amazement, “Did we really just witness that?”

Celebrating in the aftermath of Auburn’s monumental victory Saturday night at LSU, I checked my phone and saw video from Toomer’s Corner, where hundreds of Auburn fans were shouting in unison, “It’s great…to be… an Auburn Tiger!”

Everywhere the Auburn Family gathers, memories are sure to be made.

That was certainly the case in Baton Rouge, where Coach Harsin’s team earned Auburn’s first victory at Tiger Stadium since 1999, and Auburn’s largest comeback road win since the 2010 Iron Bowl.

It was an impressive display of resilience, toughness and grit, qualities for which Auburn football has long been known. Those traits will be essential as we continue to navigate one of college football’s toughest schedules, with only SEC foes remaining.

Now comes the Deep South’s Oldest Rivalry, and another opportunity to make a statement.

With 87,451 fans expected to pack Jordan-Hare Stadium Saturday, we’re asking the Auburn Family to arrive early with your tickets already downloaded to your digital wallet. Gates open at 12:30 p.m. CT.

For our Auburn Athletics staff, it’s “all hands on deck.” To mitigate staffing shortages that have affected industries nationwide including intercollegiate athletics, we will be utilizing our many of our Athletics employees are volunteering to assist with venue entry, ticket scanning and concessions as needed.

Our goal remains to provide the best gameday experience in the country, and we’re humbly asking for your patience and understanding if wait times are a little longer than normal.

Be loud and be proud. Your energy and intensity create a significant home-field advantage for our student-athletes.

It promises to be a big week on the Plains, starting Thursday with Tipoff at Toomer’s, followed by Friday afternoon’s statue unveilings of Shug Jordan, Cliff Hare and Pat Dye. If you’ll be staying in town Saturday night after the Georgia game, please support Coach Hoppa and the nationally ranked Auburn soccer team Sunday at 2 p.m. vs. LSU.

Congratulations are in order for Coach Brent Crouch and the Auburn volleyball team for sweeping two matches from Alabama over the weekend.

Our tennis, swimming and diving, golf and cross country student-athletes are also competing, with 2021 NCAA indoor champion Joyce Kimeli once again leading the pack. Basketball season tips off next month at Auburn Arena, while baseball and softball are scrimmaging against other teams to prepare for their 2022 seasons.

When Olympic gold medalist Suni Lee isn’t dancing with the stars, she’s training for her freshman season with the Auburn gymnastics team, which begins in January.

We invite you to show your support by attending Auburn sporting events as often as you’re able.

While you’re on campus, please take a few minutes to visit the Jordan, Hare and Dye statues outside the southwest corner of the stadium near the Tiger Walk entrance. Let these new landmarks educate you about Auburn’s prodigious past and energize you about its fantastic future, and the role we all play in making sure the Auburn we pass down to the next generation is greater still than the Auburn that Cliff Hare, Shug Jordan and Pat Dye gave all of themselves to help build.

They believed in Auburn and loved it. So do we, my friends. So do we.