For at least the past 7-8 years, and definitely since the introduction of Auburn’s “All Auburn, All Orange” campaign, there has been at least one game a season where somebody told somebody that Auburn will be wearing orange jerseys. This usually sparks huge debates between Auburn fans with one side arguing that it would be cool (usually students), and the other side arguing for tradition (usually the 25+ year old crowd). I’m usually somewhere in the middle, but tend to lean towards the older crowd’s side.

Now, as we’ve rolled into the 2010 season, we have another rumor, a different rumor. With this week’s game against Clemson, the University is asking for the fans to wear all blue, in what they are calling “True Blue“. I’m all for it. I love blue. We are blue. Kick ’em in the butt big blue. Sure, orange looks a lot cooler on TV because it’s brighter, but blue is Auburn’s main color.

Let me say that again: I AM NOT SAYING THAT AUBURN WILL WEAR BLUE PANTS. I AM JUST TELLING YOU THAT SOMEONE I TRUST, WHO KNOWS MULTIPLE PEOPLE IN THE ATHLETIC DEPARTMENT TOLD ME THAT THERE WAS A SHIPMENT OF BLUE PANTS IN THE BUILDING. 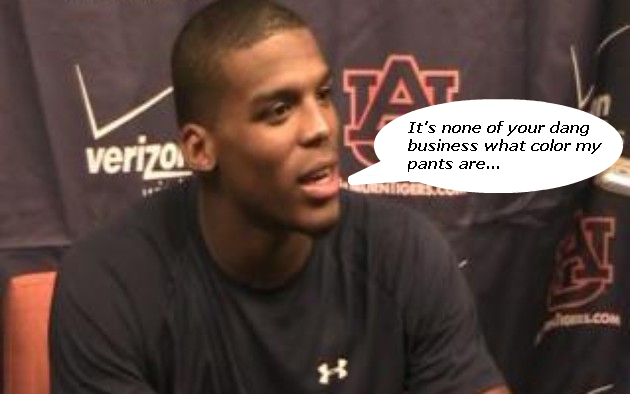 I wouldn’t put it past Under Armour to at least send a set of prototype pants (my new band name) to Coach Chizik in hopes that he would allow his team to wear them on national television this Saturday night. Besides, Under Armour needs all the attention they can get in the “cool uniform” department now that every major program with a Nike contract has sold their soul to the Nike Pro Combat campaign.

If Auburn wore the pants and won, that’s awesome, but let it just be this once. This shouldn’t become a normal thing, even if we do win and the fans love it. If Auburn wore the blue pants and loses, everybody in the world would blame the loss on the pants, which is stupid, but makes a little sense.

College players care about stuff like this. We’d like to think they don’t, but they care about how they look in the uniform. It’s just the nature of the teenage/early-20’s mind. I’d hate for one of our defensive backs to get caught up in the hype and attention and sit there and think “look at these sweet pants” before he realizes a Clemson receiver just ran past him with the ball. It may sound like a stretch, but it could happen. When it comes down to it, not wearing blue pants will never be blamed for a loss, but wearing blue pants definitely would.

Changing one of the best uniforms in college football is always a mistake in my opinion, but on the other hand, today’s game is much different than before. If you don’t bring attention and promote your program at all times, you will fall behind quickly. I just wish we would bring attention with wins, not pants.

Lastly, I just don’t think it would look that good. How would they do the stripes? Would they have weird designs on them? We may find out Saturday, we may never know, but thanks to the Wayne County War Eagles, we can at least sort of see what they may look like. Keep in mind, these are high school uniforms, the stripes on the pants for some reason don’t match the stripes on the sleeves, and if Auburn did wear them they would be made by Under Armour, so they would look better than this, but I’m still not sold on it.

So there you go, wear your blue because the football team might be doing it too. I’ve heard small rumblings of all blue shakers too, but that really would be hideous.

Ok, I talked myself out of it. I don’t want them to wear them, and I don’t think they will, given the amount of the times the orange jersey rumor has been wrong, but we’ll see. Either way, we won’t be wearing purple pants, so we can always be proud of that. What do you think?

Bring it on. I’d welcome something like that. I do love our uniforms but spice things up just a bit.

Alternate unis jumped the shark when UAT flattened UGA in their black jerseys. You can also study the case of EXTREME alternate uni failure when UGA broke out the black helmets against Florida.

But….I’d rather have blue pants than orange jerseys. Just sayin’.

Horrible idea. Did any Auburn fan watch Boise State/ Va Tech and think, “I wish Auburn dressed like that”? Those kind of uniforms are the football equivalent to overweight chicks in tight pants/ tank tops with the word “bitch” or “slut” in glittery rhinestones.

Changing our uniform (even only once-or-twice a season) would make us the laughing stock of the SEC (except to Florida and Tennessee – who have no taste anyway).

[…] remember, during the week leading up to the Clemson game, the Auburn Family was all abuzz regarding the rumor of the team wearing blue pants. As you may also remember, the blue pants rumor took a back seat to a much bigger (and founded by […]

[…] without a doubt proves what I have been telling you the past few days. This doesn't mean that Auburn is wearing all blue on Saturday, especially since Chizik said […]