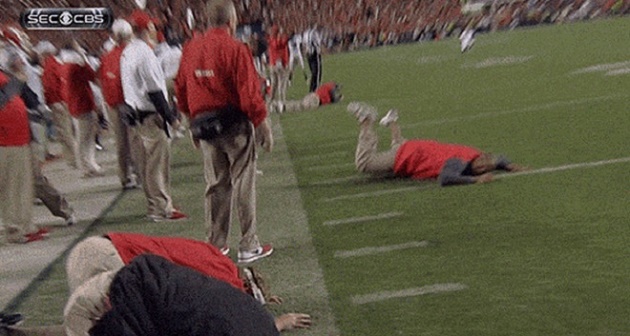 Cory Brinson from TheBlawgHouse.com is a college football writer and twitter personality (@TheBlawgHouse) that writes about Georgia football. Cory writes with an X’s and O’s perspective and, while a big Bulldog fan, still writes using the facts of the game, not opinions (his words). He’s a regular now, but you may remember 2011 when he was part of one of the most commented-on posts ever. You’ll love him.

Oh, probably about the same as it always is – the little brother rival that tends to copy every thing you do since they can’t decide who they are.

When you have beaten a team 80% of the time over the last 10 years – that 8 out of 10 for the Auburn-educated – you tend to have a certain level of confidence against a team. Hell, the last time we lost to Vandy and played a highly-ranked Auburn team we boat-raced Auburn in Jordan-Hare.

2. Are you still a believer in Kirby? Was it a Smart decision? See what I did there?

I was a big Mark Richt supporter. That being said, Kirby Smart is our head coach and I believe he’s going to do a great job in Athens. He’s recruiting at a high-level (I see UGA sits at #5 and Auburn sits at #16) and he’s changing the culture each day.

I believe you all know it as, “The Process.”

3. Is Nick Chubb still on the team? Haven’t heard his name much this year.

For a guy who many thought might not be able to play the game again and with an OL with as many gaps as an Auburn fan’s mouth, Nick Chubb has blown away a lot of expectations this year. Is he having the year of his career? No. But, not many thought he would.

That being said, Georgia’s committed to running the ball and I expect Chubb to play a big role in this game.

Gotta be Auburn’s front seven (especially the DL) against Georgia’s OL. Those with a weak stomach may not want to watch.

On the other side, I think Georgia’s young DL is coming into its own and I expect them to play a big role this week.

I have really enjoyed watching Javon Wims come into his own at WR. He’s been a reliable down field threat and possession receiver as of late.

The other is CB Deandre Baker. He’s a high-motor guy who is coming on big time in Smart’s defensive backfield.

I’m not sure how much success Georgia will have in the run game, but, it will be important to gain some kind of success there in order to open up the passing game.

I’m interested to see how Jacob Eason does against the pass rush of Auburn. The WRs have (surprisingly) started coming into their own the last few weeks, so I’m curious if he can make some big plays to Wims, Godwin, IMac, or, his favorite target, Isaac Nauta.

Those are two fun scores to remember.

While Auburn has enjoyed a nice little run, I think they lose to Georgia, win against some other crap-ass Bulldogs, and get curb-stomped against Bama, leading to an 8-4 record.

On the flip side, I think Georgia puts things together and goes on a nice little 4-game win streak to finish the year 8-4, as well.

So, there’s Auburn trying to be Georgia again… just, as always, a little worse.

10. Is spitting on visiting fans taught at a young age in Athens, or is it just instinct that is developed over the years?

It is funny. Everywhere you read about must-see places to watch a college football game, Athens is always up there. Ranked as one of the best college towns in the nation. Incredible campus, stadium, passionate fans, downtown scene, food scene.

Yet… for some reason, you tend to never have a good time. Seriously, I look over your Gameday Tweets from past UGA vs. Auburn games and almost every single one ends up so sad. I really hope you get to enjoy the good side of Athens like everyone else. But, judging by your typical tone in every pre-game tweet, I can see why not many people enjoy your company here.

As for the spitting, just think of it as a bit-by-bit piece of revenge for the hoses.

When I went to the AU/Georgia game in Athens in 2014, I experienced the following: death stares, a gentleman asking us what we were even doing there (ummmm….), a young lady kicking my husband in the back and knocking his hat off his head while screaming F*** Auburn! repeatedly throughout the game, a GA fan moving so he would not have to sit next to us although we had been cordial and barely made a peep, and to top it off we were yelled at by GA fans as we left the stadium – I was seriously waiting for someone to throw something at us. I had always looked forward to going to Athens because I had heard it was a fun game experience. Never again.