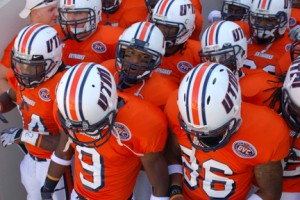 UT-Martin’s head coach, who will remain nameless for lack of caring, asked if they could wear their orange jerseys. I’m not really sure why they would do this. Maybe to get the fans who want us to wear orange jerseys cheering for the wrong team? If you didn’t know, everything about the UT-Martin uniform, besides the logo on the helmet, looks exactly like ours. So for them to wear a jersey that would look like our version of it makes me think that something is going on. I don’t know what it is, but something’s fishy for sure. I mean, has a 1-AA team ever asked to wear different jerseys or for anything else besides a paycheck when playing a 1-A team? I would bet not.

For years, fans have wanted to see the Tigers come out in an orange jersey, but I would be willing to bet that when a team tries to pull a gimmick like that, the majority of the time they lose or don’t play well. In fact, Auburn has worn orange jerseys three times: in the late 70’s and early 80’s. Their record was 1-1-1. I rest my case. So although it may be cool to see us in orange jerseys one day, let’s wait until we’re at least over .500 in the record column to try it.

Tell me what you think about these shenanigans.

The 2014 Schedule: One Sentence Predictions

Well we tried going to the spread and that gimmick didn’t work. Why not orange jerseys? Give the less than optimistic fan base something to get excited about. If we wore them against UGA i think that be awesome. In reality what do we have to lose?

Remember the backlash of the Blackout that UGA did against Alabama. They were made fun of for weeks.
Imagine Tommy calling for orange jerseys, we lose to UGA, then the pundits make fun of Auburn and Tommy, further fueling the idiots that want him fired. I want it sometime just for fun, but just not this year.

I don’t think anyone will blame the orange jerseys if we lose against UGA. Remember the reason the UGAly dawgs were criticized b/c they should have won and came out looking like a middle school team. I think it’s different when expectations are high.

I just think you better be 100% sure you’re gonna win if you do something cute like wear another jersey. Needless to say, I think Tommy has the write perspective on it.

I agree. I honestly won’t be upset if they never wear orange jerseys, but I do think it would be cool. I wonder what Tuberville is writing on his perspective Mr. Blogler?

Probably that this site is responsible for the last 4 losses because of the weekly previews.

I don’t think we need to even think about wearing orange jerseys, or any new unis. Our uni. is one of the top ranked unis. in any poll I’ve ever seen on the matter. If we ever do it, I think it should be @ LSU in a year we are favored.