Ain’t it pretty? Well I guess it depends on who’s being reflected in it, but it’s cool nonetheless. I mean, the orange facemask is even metallic. Opponents could see their expression go from intensity to fear all the way up until the boom is laid.

Before you flip your lid, here’s the story: the helmet belongs to Jahmere Irvin (he’s the one shining back at you in the picture), a 3-star cornerback commitment for the Tigers. Jahmere’s brother is a quarterback. His quarterback coach is Steve Clarkson. At his camps, Clarkson gives out helmets to all of his quarterbacks. Since Jahmere is a DB, he didn’t get one, but all it took was one request. He asked Clarkson for one of his own, and this is what came in the mail a few weeks later. He called it an early birthday present. 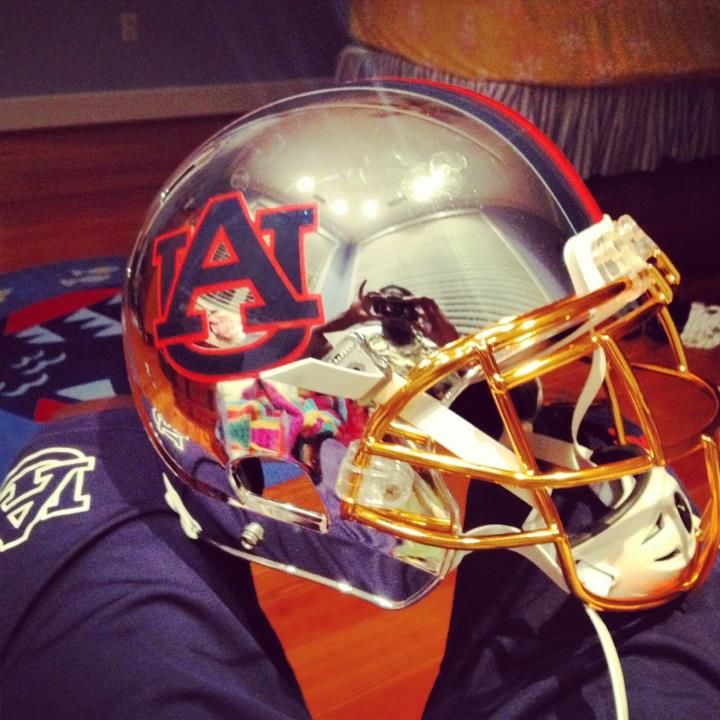 This will never happen, so you traditionalists calm down. It’s just a fun little prototype. Just enjoy that it’s something Auburn, ok?

Thanks to @AUFamily for the heads up.

I thought the blue one was bad ass, and I think this one is bad ass, too.

I think Auburn should totally go this way. Auburn could be the Oregon of the SEC. What do we have to lose right now? Believe it or not I think this attracts recruits that you may not get otherwise. It may seem stupid to older folks like me but it’s what these kids like and you know bama is not going to do it. Someone needs to convince the money people to do this.

OH NO! NOW ALL THE AUBURN TRADITIONALISTS ARE GOING TO RAGE ABOUT HOW WE HAVE TO KEEP OUR UNIFORMS THE SAME! I bet most fans would still like the bulky Russell gear from the 1980’s if we could still wear it. IT’S CALLED TRADITION. hahahaha I wish AU fans would lighten up and see that if we had one alternate uni that we wore every once in awhile it’d be cool. Too bad our fans think like 90 year old men. They don’t understand the appeal that Oregon and other schools have to the young kids. And I’m not for changing anything, just saying an alternate uniform every few years wouldn’t do any harm, or for that matter just being a litttlllleeeee more open minded when it comes to alternate uniforms (most AU fans want to hate every single Nike Pro Combat uni that comes out, but I think a few of them look really good).

I actually like this helmet a lot. It wouldn’t hurt to have an alternative look every once in a while. This helmet would look really cool under the lights at Jordan Hare.

I love this, I love it a lot, but would it get too hot? Might be an interesting advantage.

The metallic orange on the facemask I don’t love, but overall, it would make for an interesting look.

I would love to own one.

Of the comments above, only TheAuburnGirl makes any sense. It also shows why teenagers should never be allowed to vote.

Ugly, hideous, revolting, repugnant, repulsive, unsightly, gruesome, shocking, dreadful, etc. are some of the words that immediately spring to mind.

Yeah, this would look awesome under the lights…NOT. Especially when the idiotic MIRROR finish reflects into the QB’s, WR’s, DB’s eyes and screws up a play for AU.

Hi, I do believe this is a great blog. I stumbledupon it ;) I will come back once again since I saved as a favorite it.
Money and freedom is the best way to change, may you be rich and continue to guide other people.

I am really grateful to the owner of this web site who has
shared this great paragraph at at this place.

Thanks on your marvelous posting! I really enjoyed reading it, you’re a
great author. I will be sure to bookmark your blog and will come back someday.
I want to encourage you to ultimately continue your
great posts, have a nice evening!

whoah this blog iѕ fantastic і loѵe studying your articles.
Keep up the good ωork! You understand, lots of people
are huntіng rounԁ fоr this info, you can help them greatly.

I am not sure where you’re getting your info, but great topic.
I needs to spend some time learning more or understanding more.
Thanks for great info I was looking for this info for my mission.

Lots of features and functions on these steam showers, I really like
the multimedia idea along with the lighting

Thanks for sharing your thoughts about gift. Regards

While the simple and classic whisk is great for many tasks in the kitchen, there are some
times and some recipes that require more speed and dexterity with the mixing, and that’s where these valuable devices come in.
There are a lot of advantages to life with all of the fancy gadgets
available to us in this day and age. And so it was with Julia’s enamel sauce pan which she
bought in Paris in the 1940s and used up until the 1990s.

Many partners shy away from the most wonderful
gift of God to mankind- sex. At this time I was in college and sharing a town-home
with good friend. If he can get away with calling her promiscuous than he will,
and if he knows that it won’t work than he’ll say that she’s delusional for believing that their relationship amounted to more than a
brief casual encounter for two or three emails, even if they had a full blown cyber sex session that lasted for
an entire week and she kept their records.

Hello my family member! I wish to say that this post is amazing, nice written and come with almost all significant
infos. I’d like to look extra posts like this
.

Hi there, all is going fine here and ofcourse every one is sharing data,
that’s genuinely excellent, keep up writing.

Excellent items from you, man. I’ve remember your stuff previous to and you’re
simply too magnificent. I actually like what you have obtained right here,
really like what you’re stating and the way in which through
which you assert it. You’re making it enjoyable and you still take care of to keep it wise.

I can’t wait to read much more from you. That is really a tremendous website.

It’s not my first time to pay a quick visit this site, i am visiting this site dailly and obtain fastidious data from here every
day.

You really make it appear really easy along with your presentation but I find this topic to be really one thing that I feel I’d by no means understand.

It seems too complex and extremely wide for me.
I’m looking forward to your next put up, I will attempt to get
the dangle of it!

You should take part in a contest for one of the highest quality blogs
on the net. I am going to recommend this blog!

Wow, that’s what I was searching for, what a stuff! existing here at this website, thanks admin of this website.