I have no more excuses. I just, for some reason, can not get these dang mailbags posted at a decent hour each Tuesday. But just for motivation, I am not going to change the name. They will be posted on TuesDAY at some point again. I swear to it. Anyway, this is a good one. Have at it.

Shannon wants to talk about fashion… 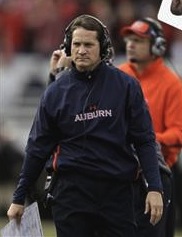 As a Georgia-raised Auburn Lady, the UGA game has always been the biggest game of the season next to the Iron Bowl for me. In fact, this game is for me what the Iron Bowl is to those raised in the state of Alabama.

This year was, well…we all know what happened, no need to elaborate, but I will say this. I thought we had a pretty good chance of a solid game against UGA. Clearly that did not happen. As a superstitious fan, I have one thing to say.

Gene, Gene, Gene. You dismiss the idea of uniform changes all the time, so what was with your sudden wardrobe change from white to navy? I love you dearly but really, this had all of the Auburn Family scratching their heads.

I’m sorry, I have to take some of the blame as well. I have decided to take part in “No Shave November,” therefore I had facial hair during the UGA game that I did not have during Auburn’s last win (Ole Miss). I said I would shave at halftime if things weren’t going well, but considering that I knew that even shaving my face wouldn’t even help, I kept it.

So although Gene changed jacket colors, which I actually did like (besides that horrid huge AU on the back), we can’t blame it all on him. But come on, do things like jackets and beards really affect the outcome of football games? Yes, they absolutely do.

Ben asks something I’ve pondered over for sometime….beatdowns.

I say all of that to say this: when Auburn has excellent teams they don’t pound the rivals like the rivals pound us. When we have a down year, it’s as if the other team wants to mercilessly beat the hell out of us, and they do. When do we get to roll through and beat Georgia 45-7, LSU 45-10, and beat the hell out of Alabama 36-0? I know the Tigers won six in a row by probably an average of 6 points each, but it is time. I am thankful for the 2010 season, It was phenomenal. Maybe one year though I’ll take a 10-2 season with some serious beatdowns courtesy of AU!

I had this exact same thought sometime in the second half of last weekend’s game against Georgia. You are absolutely right, especially this year. It seems as though when Auburn loses to their rivals, in general, it is a beatdown. But when Auburn beats their rivals, the game is somewhat close.

I’d like to be able to say that it’s because Auburn doesn’t run up the score on teams, but that’s not the case. Even in Auburn’s best years, they have still played semi-close games with the teams we’d like to see beaten the worst. However, aside from the 2008 Alabama game, I don’t think those teams were piling on. The 2011 LSU and Georgia games were over pretty early, and the opposing coaches did mercifully call off the dogs.

So to answer your question, I have no idea. It’s never really been Auburn’s way to blow out anybody. Regardless of the halftime score, it always seems that each game is close until at least the start of the 4th quarter. Maybe it’s just in Auburn’s blood. Maybe it’s just the Auburn way. Maybe they just like to give us heart attacks. Would you have it any other way?

On Saturday it seemed like some Auburn bloggers (but not bloglers) and beat writers went all Chicken Little on the team. In your opinion, which criticisms were warranted and which were overblown. If you want to name specific individuals who went over the top with their criticisms, well, that would be fun, too.

There were simply too many criticisms to remember them all, but I can’t say they were all wrong. Auburn did not play well, nor were they coached well, however some of these “objective” beat writers seemed to treat this loss as a chance to pile on the negativity.

Let’s just be honest, not all of the Auburn beat writers are Auburn fans. To some of them, this is just a job. They are there to gather stats, ask questions, and write about each. Given that Gene Chizik doesn’t give away much of anything in any public setting, it has to be very tough to write something new or even have enough information to fill one article. This obviously and somewhat understandably irks some of the beat writers. Follow any of them on Twitter and you’ll see that most seem to hate their job.

So when Auburn plays poorly, they report that they are playing poorly, but some also seem to let their hatred of their job and their resentment towards the boredom of covering a Gene Chizik press conference slip into their “objective” reporting. Calling out certain 18-22 year old football players, questioning coaching decisions, and making sarcastic statements are not part of beat reporting.

There are some that are worse than others, and one that is worse than all. Some people like it, but I do not. If you don’t pull for Auburn, then just report the news. That’s not to say that if you do pull for Auburn you should sunshine pump the news, but it’s an objective position whether it’s writing or blogging or tweeting, and some don’t always follow that rule.

The easy response for any of them would be that I only feel this way because I’m just not happy with the facts because Auburn is losing. That’s not what I’m saying at all. I would just like to read the news rather than have someone who is mad they had to go listen to a boring press conference spin everything into a worse negative than it already is. People want to read stats and quotes when they visit a beat writer’s blog or read an article in the paper. This isn’t the place or forum to voice your displeasure with the beat you’re currently assigned to.

And again, this is not all of them. Auburn has some great beat writers that I enjoy reading daily. There are just a few that either need to move to another beat or take a another look at their job description.

Casey is into conspiracy theories. I’m going to call him Conspiracy Casey…

Here is my conspiracy theory concerning Gus Malzahn. I think Chizik sent Rhett Lashlee to Samford to gain some OC experience under Pat Sullivan, knowing Malzahn might leave soon and wanting to keep the same offensive system intact. What do you think the odds of him being on the short list if Gus left?

As much as I enjoy a good conspiracy theory, there’s no chance that is true. Auburn and Samford are not in cahoots. They don’t trade/share coaches to build experience. The choice to go to Samford was Coach Lashlee’s and his only. He knew that if he wanted to move up in the coaching ranks, he would have to get an OC job first. Plus, if you’re a graduate assistant, as he was last year for the National Champion Tigers, and a school offers you a job coaching their entire offense, and the head coach just happens to be a Heisman trophy winner, you take it.

I don’t want to entertain the idea of Gus leaving because I hate to feed the rumors, but if it does happen, I do believe Lashlee would be on Chizik’s list to replace him. He’s known this offense since high school, as Gus was his coach, and he would offer almost a seamless transition in offensive play-calling.

As an Auburn senior in 1999 I made several trips to watch the Tigers play on the road. The most memorable (if that’s truly possible for a college student) was the beatdown our Tigers put on those other Tigers in Baton Rouge. Faked a field goal early in the game and never let up. Final score: AU 41 – LSU 7. I still get goosebumps thinking about it. Baton Rouge was eerily quiet afterwards.

Although not a beat down on a regular foe – the SEC championship last year was esp painful for SC; I loved every min of it.