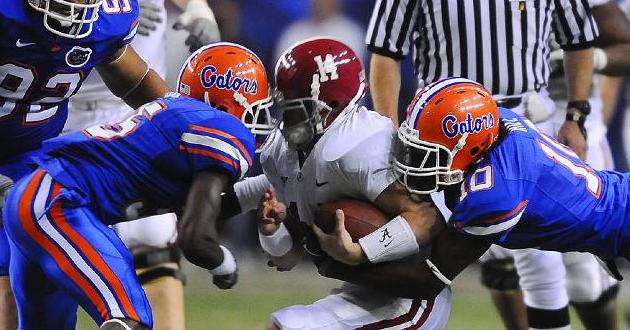 So the bye week wasn’t so great for my picks, but now that I had a chance to sit and watch every team in the nation play, I will never miss a game again. Promise. Hold me to it.

This week brings in a few nice games, if you’re just looking at the names. Most should be blowouts, but we’ll see.

Auburn at Kansas State – Check tomorrow’s preview for my score prediction. SPOILER ALERT: fan hope and excitement has maybe affected a box score in 1% of the history of sport.

Troy at Georgia – Troy is apparently awful this year. Yeah, they lost to Abilene Christian last week. Georgia will likely suffering from a major hangover from last week’s loss at South Carolina, but they’ll easily bust through the Trojans.

Texas A&M at SMU – Since beating South Carolina in Week 1, Texas A&M has faced Lamar, Rice, and now SMU. This makes them the best team in the SEC because they beat an overrated team and then pummeled three cupcakes. And their quarterback has already given himself a nickname. Real deserving bunch, I say.

Florida at Alabama – Oh it’s the big one! Put these teams in Atlanta right now! Send ESPN Gameday SEC Nation to Tuscaloosa! The world is watching! No… they’re not. Florida struggled to beat Kentucky in triple overtime. Alabama might be the most boring team in football, but they are way better than Florida. People want this to be a big game, so a win by Alabama will be a signature win so far this season. You watch.

Indiana at Missouri – Still ain’t played an SEC team, have you? Nope. Get out of my conference.

Northern Illinois at Arkansas – Arkansas is back! And they’ll prove it again over a superior opponent. Arkansas has played one good team this year, and they lost by three scores. They’ll run over another lowly team (yeah, I guess Texas Tech is lowly this year) and start to win over a few more supporters. Bert is still Bert, though.

Mississippi State at LSU – Mississippi State won the biggest game in Mobile history last week! But really not. Dan Mullen is just sad isn’t he? LSU led LA-Monroe 10-0 at the half last week. What, did they let Saban coach the first half? Sounds like Les took over in the 2nd half and they ended up winning 31-0.

This one will probably be close for a bit, but only because I think LSU may not be that great, at least on offense. LSU will end up pulling away as Dak Prescott’s Heisman chances begin to take a hit.

Miami at Nebraska – This was like a national championship game a few times, wasn’t it? It’s not this year. You’ve got one team that plays in front of 100 fans every week, and one that has had consecutive sellouts for the last 30 years. This game is being played in front of a sellout, which would help most teams, but Bo Pelini is so weird. Meh, Miami ain’t all that this year.

Clemson at Florida State – Florida State’s first playoff game comes early this season. The only team on their schedule that by name sounds like it could be a tough contest is Clemson this year. But that awful team Georgia already beat them, so yeah… good luck. Seriously though, Florida State is like a two touchdown favorite, and this is seriously the toughest game they have (besides maybe Florida if they improve greatly by then). It’s ridiculous.