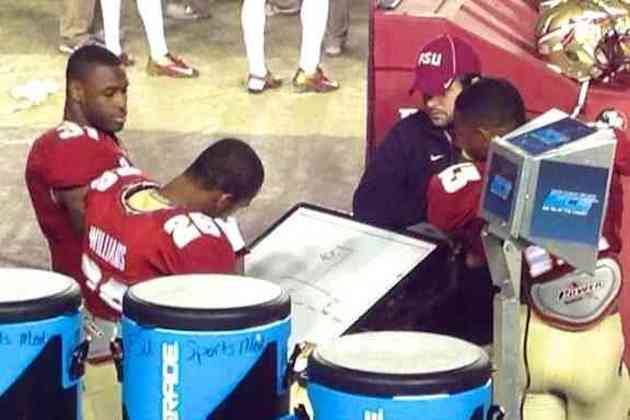 Jack Jorgensen (@JackJ14CFB) is the College Sports Editor for FanSided.com (Sports Illustrated-partnered) and he’s also the Managing Editor for ChopChat.com (@ChopChat_), the network’s Florida State Seminoles community. He’s a lifelong Seminoles die-hard who might just be a tad bit heartbroken that there is now a player who steals his heart more than Charlie Ward did.

1. What is a Florida State fan’s first thought of Auburn football at this very moment?

What sort of Southern voodoo curse did you put on Urban Meyer to make him lose that Big Ten Championship Game? Not to knock your accomplishments or anything, but we were looking forward to two things. Either beating Alabama (you know, the game that everyone actually WANTED to see) or smashing our old friend Urban Meyer. We’re placing all the blame with you, which gives us more of a reason to make this hurt for you just a little bit more.

2. I’ve seen lots of um… optimism from the Florida State fanbase on Twitter. Are there any out there that realize that Auburn will be the best team with the most accomplishments that Florida State has played this season? Does that matter that any Noles fan?

We’ve heard this story before from those Clemson guys before we went down to Death Valley. You know, the ones that beat one of the SEC’s golden children, LSU in the Chick Fil A Bowl last season? The same team that beat the healthy Georgia squad to start the year, the same Georgia team Auburn almost lost to had Ricardo Louis not turned his head at the right time.

Ask Mr. Dabo Swinney, Mr. Tajh Boyd and Mr. Sammy Watkins if we realize it or not when we have a good team in front of us.

3. Where will Florida State excel against Auburn?

If the SEC title game was any indication, the passing game. With all due respect to James Franklin, DGB and company, Jameis Winston and our receivers (Kelvin Benjamin, Kenny Shaw and Rashad Greene) might break some sort of BCS Championship record against that secondary.

4. Where will Florida State struggle against Auburn?

To get serious for a moment, as prolific as our defense has been all season, this will be their first test against an offense that can run the up-tempo spread to near perfection like you guys can. I’m anxious to see how our primarily young D handles the extra assignments.

5. Name two Noles that Auburn fans may not have heard of, but should worry them.

1) Karlos Williams: Our third-string running back may be the best running back we have on the roster. No, that’s not a typo. It may damn well be very true. He converted over from safety right after the season began, and he’s gotten progressively better since. Pasadena may be a coming out performance.

2) Levonte ‘Kermit’ Whitfield: Yes another advantage that we have over you is that we have a speedster named Kermit. Track star, dynamic athlete and is beginning to show up in the passing game as well.

6. Name two Tigers that scare you and why?

1) Nick Marshall: In all my years of watching college football, I’ve seen few players that have gotten better as week goes by better than Marshall has. Beginning of the season, he looked lost at times. Now, you can see he’s in full control of one of the more difficult offenses to run in the game. Simply amazing.

2) Tre Mason: He’s deserved respect from the nation even dating back to last season. He went out and got that respect this year. He’s one of the more patient running backs in the country, which you need to be to have a chance of finding any sort of hole in this FSU defense.

Bo Jackson, which I’m sure you probably get from everyone, but how could anyone not love Bo. Then after Bo, probably Carlos Rogers. I thoroughly enjoyed watching him play defensive back, and punish any human being that stepped anywhere near his vicinity.

9. Where will Auburn and Florida State start off next season?

Really, they’ll probably be one and two. With Jameis coming back, I believe win or lose this game, they’ll still be ranked number one. And with you guys bringing Marshall back and Mason, there’s not reason these two shouldn’t pick up right where they’re leaving off.

10. With all the nice cars Florida State players are driving, not one booster can afford to get Jameis some glasses?

Look, after all these years, I’m just happy this wasn’t a Free Shoes University joke. They were starting to wear thin with me.

Week 8 Predictions: All SEC, All Everything

I just don’t understand why FSU fans won’t acknowledge that Auburn will be the toughest challenge they have faced this year. “Yeah that’s what Clemson said” is not an argument.

The Clemson = Auburn line is such a straw man argument.

Ok, I grew up in Tally and bled garnet & gold for years, but FSU didn’t have program I wanted, so I went to school at Auburn. Always loved both. But even back in 99, I was getting sick of bandwagon FSU fans who weren’t there back in Bowden’s early days when FSU was trying to get established. They are spoiled and petty, especially about the SEC. I still love the Noles, but I’ve had my fill of their disrespect for Auburn. Clemson is, well, Clemson. They pull that same stuff every year and make people think they’re good, but can never put it all together. I’ve watched every game for both teams this year, and the Noles haven’t seen anything like what they’re going to see from the Tigers. The Noles are good, but so are the Tigers, and AU is battle tested. It’s going to be a good, close game.

Yes. Exactly. This is what I want FSU people to acknowledge. Both teams are good; it’s going to be a tough game to win for both sides. There’s no reason for cockiness from anybody.

Missouri & Bama thought they had good defenses too…

As an FSU student I will say that AU will be the toughest team to date. I will also say that fsu is the toughest team that AU will play. Yes more so than an overrated Alabama. The only way it is close for auburn is if they have massive success running up the middle. With lock down db’s, the secondary is strong enough for the linebackers to concentrate on the run, and overall the defense is fast enough to seal the edge. It will be a tough game for auburn, and possibly FSU, but with a month for each team to prepare who knows.
On a side note if you guys did use voodoo on Ohio state… please do it again, you all know how much we love Urban Meyer.

I don’t know who’s going to win. I’m hoping for Auburn. I just wouldn’t bet on any of the ridiculously lopsided lines I’m seeing.

This guy’s score prediction is the most ludicrous thing I’ve seen on “The Other Sideline” since it’s inception. This guy is clearly smoking some form of narcotic. Holding Auburn to 21 while scoring 63? You do realize Jeremy Pruitt is your DC, don’t you guy?

This guy is the biggest douche ever. This was by far the most arrogant “The Other Sideline” I have seen.

FSU may very well be the best team in the country, but who have they played. There are 5-6 teams in the SEC that would go undefeated in the ACC. Auburn has been tested and passed everyone. What will FSU do when we kick them in the teeth to start the game?