I used to play a lot of video games. I remember waking up before school and playing Street Fighter on my Super Nintendo, pausing it, turning off the tv (so that it wouldn’t burn into the screen), and coming home to finish the fight I had started that morning. Now I’m not sure if you know this or not, but when you get older, and get a job, and get married, and procreate, you lose the time and desire to play video games. Well, most of us.

However, I have always tried to keep in touch with EA Sports NCAA Football franchise. It always releases right in the dead of summer when people with day jobs (who don’t have summer vacation) long for the fall and football to return. 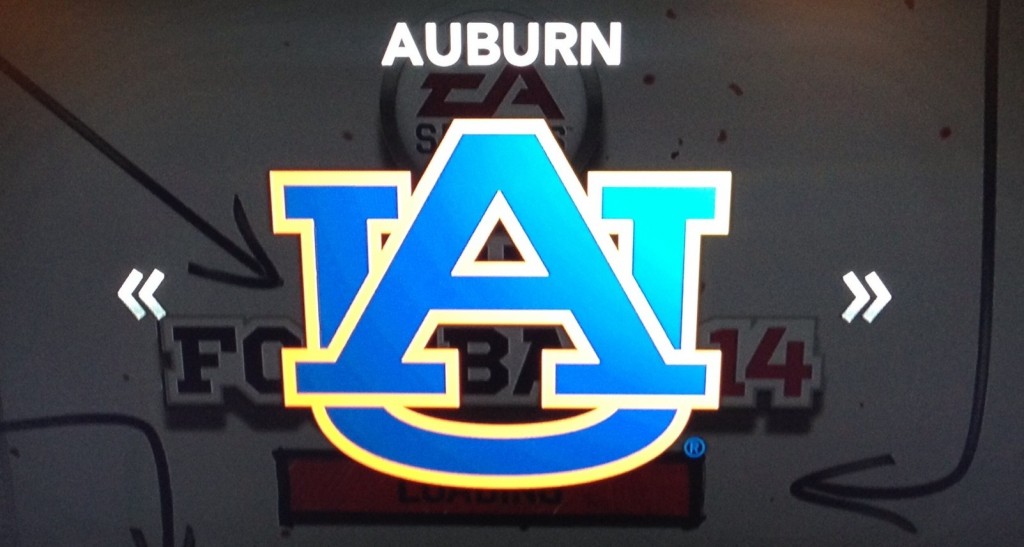 As I’ve discussed before, it may be fake football, but it’s factual fake football. There are real numbers and science behind each team. EA Sports won’t/can’t say it, but each player in the game has the same skills and talents of a real person on that team. The players even have the same numbers. They may call them something different, but they are for the most part the same size and shape as their real-life counterpart. So while it is a video game, it can also be used as a simulator to help give us an idea of what’s to come in the college football season.

The fine folks at EA Sports were nice enough to send me a pre-release copy so that I could get a good look at the game prior to its launch date (tomorrow, 7/9). You know, so I could tell you if Auburn was good enough in the game for you to buy it.

So as I did last year, I’ve run five full season simulations with Auburn against their 2013 schedule. The game goes as far as giving awards, sending teams to bowl games, and crowning a champion. Here’s how Auburn fared in each simulation: 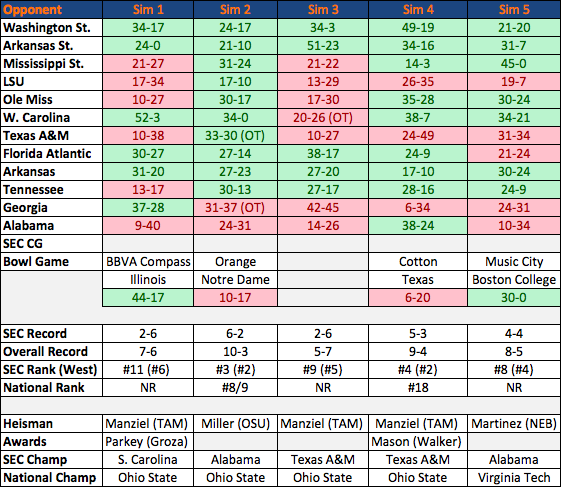 As you can see, the game isn’t too high on the Tigers in terms of actual results. Their team ratings were pretty strong, as I told you a few weeks ago, but I guess that doesn’t translate to the field. Through the first two simulations, I was sure that an Alabama fan had crossed some wires in my PS3. First a trip to the Birmingham Bowl, then a loss to Notre Dame in the Orange Bowl? Troll on, EA.

Jonathan Wallace was the starting quarterback in simulations 2 through 5, as he is in the depth chart which you’ll see you below. I’m not sure why Frazier was the starter in the 1st simulation.

Parkey was an All-American twice, and won the Groza in the 1st simulation. Mason rushed for over 1,000 yards in four of five simulations. He won the Doak Walker award in the 4th simulation.

As it turned out, the 2nd simulation was the best overall. A 10-0 start with wins over LSU and Texas A&M is strong, but ending the season with three straight losses would send Finebaum’s new show into overdrive. I think we’d all take a Top 10 ranking in Gus’s first season, though.

I previously gave you the Top 10 rated Auburn players in the game. Now I can give you all of them. As I mentioned earlier, EA Sports can not use the players’ real names so they use randomly generated names. However, I’ve already found a roster for this year’s team created by someone with lots of time on their hands. There are a few weird things that I’ll point out as we go. 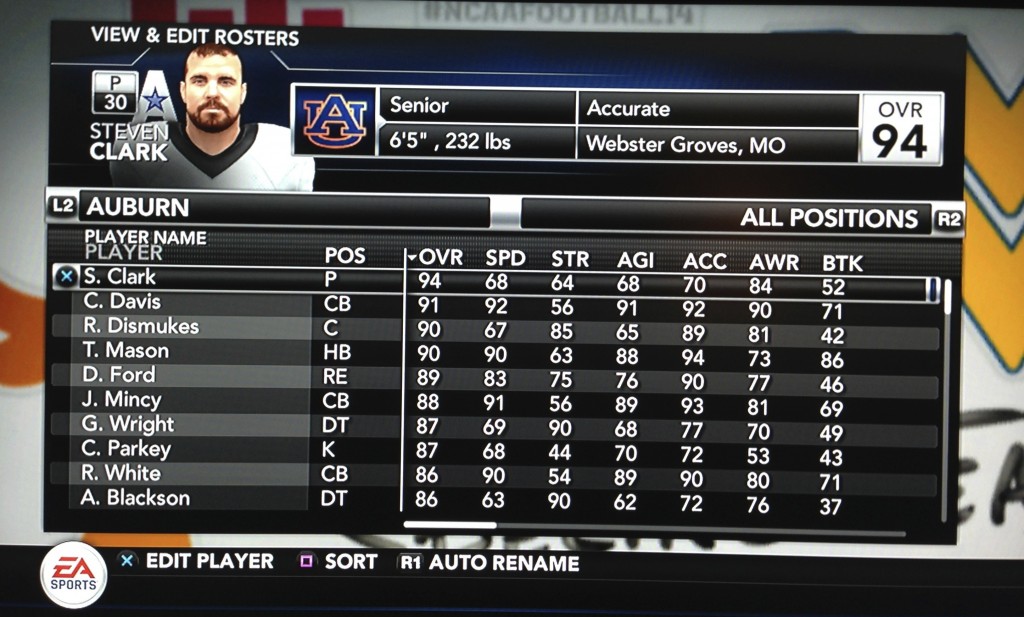 Yeah, so in that previous link we already went over how Auburn’s best rated player is the punter, and how that is one of saddest things I’ve ever read, so let’s just move on. Otherwise nothing too crazy in the first ten spots. 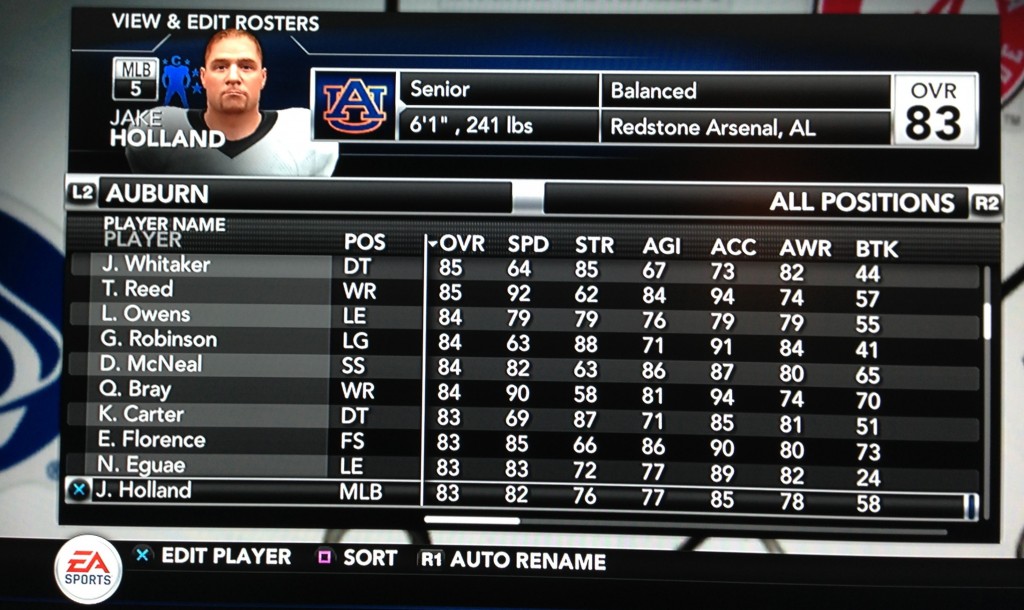 In the second ten, we see one of the toughest things that EA Sports probably has to deal with. Erique Florence “left” the team months ago, yet he’s still on the roster. He’s also the starting free safety in the depth chart. Oh well, what are you gonna do? For starters, you can just move him down the depth chart if you really don’t want him out there. 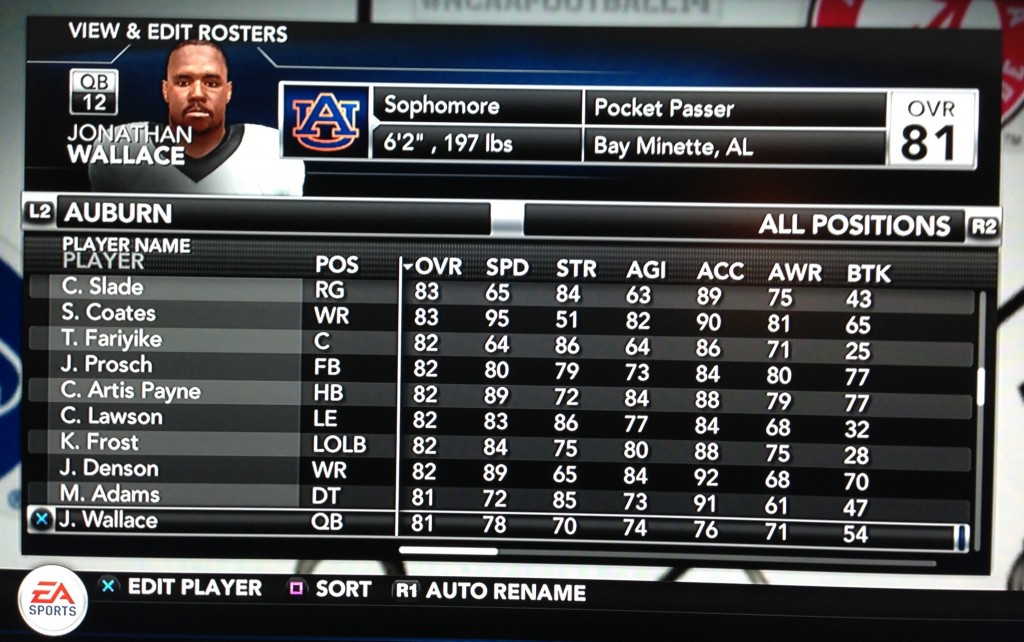 For whatever reason, Cameron Artis-Payne is wearing #31 in the game. He will wear #44 this season. He’s pretty strong in the game and led the team in rushing yards in simulation 5.

Our first impact freshman shows up in the 3rd ten. Carl Lawson, at a modest 82 is one of the top 10 rated freshman in the entire game. I noticed he’s listed as #52, his high school number, but that’s also current DE Justin Delaine’s number. I know this “person” represents Lawson because he’s a freshman, but I’m not sure where Justin went.

And would you look at that. Auburn’s highest rated QB, Jonathan Wallace, comes in as the 30th best player on the team. 30th. Nick Wallace, where for art thou? He’s actually there, in a very weird way that you’ll see later. 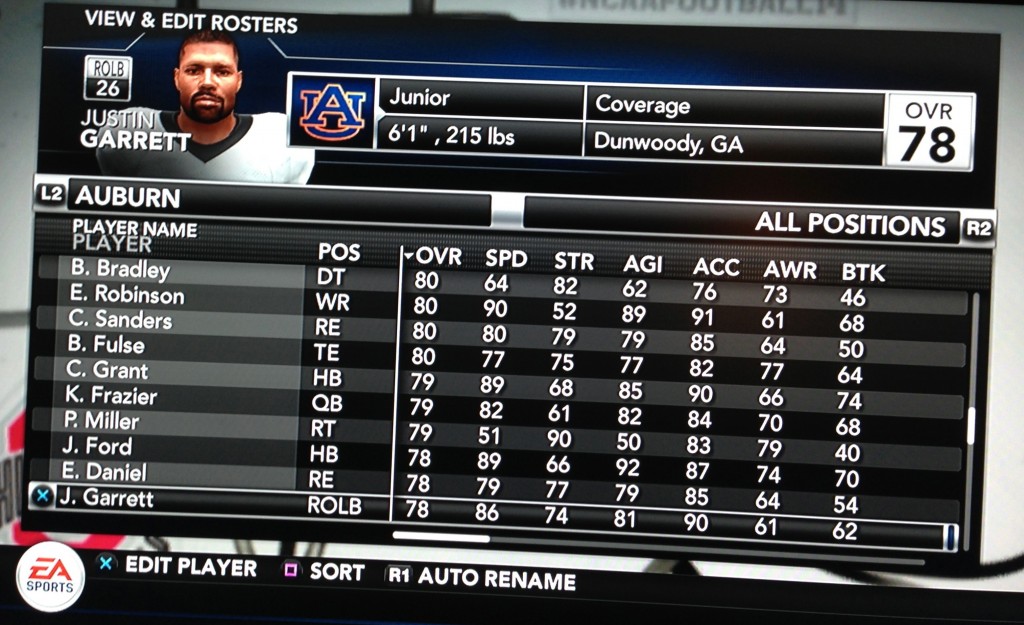 Sorry for this picture being so crooked, I was still woozy from realizing that Auburn’s virtual quarterback situation is not what I want it to be right now.

Four more newcomers show up in the 4th set of ten. Earnest Robinson needs all A’s this summer to qualify, but either way you’ll be able to play with him in this year’s game. There’s only one problem. He’s wearing #2. Naw bruh. I know it ain’t officially retired yet, but seat’s taken. I’ve never seen EA miss this in previous versions of the game, but they didn’t just stop with this number. Read on.

Also, there’s Kiehl Frazier as Auburn’s 2nd highest rated quarterback, just a few spots below Wallace. And they must’ve missed the memo on Justin Garrett’s spring with that weak 78. 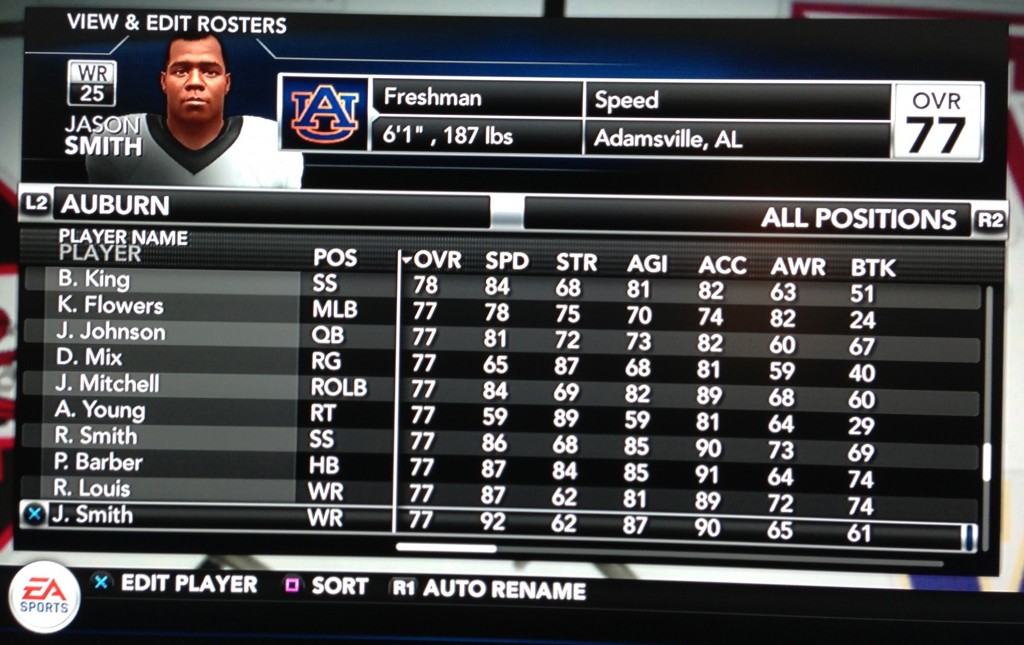 Jeremy Johnson comes in just one point under Frazier at 77. He’s listed as wearing #6, but he’s wearing #5 in real life. Ricardo Louis is wearing #6 this year, but he’s number #5 in the game. Confusing enough? Want more? Mincy is listed as the defensive #6, but he changed his number to #21 this year. Jonathan Jones wore #21 last year, as he is in this game, but this year he will wear #3. There is nobody wearing #3 in the game. Now say all that back to me without reading it again.

Speaking of jersey numbers. Peyton Barber is wearing #34 in the game. Nope. That one’s taken, too. What’s the deal?

Last in this group, we have Jason Smith who will be attending a prep school this fall. He will not be a 77-rated WR wearing #25 for Auburn. 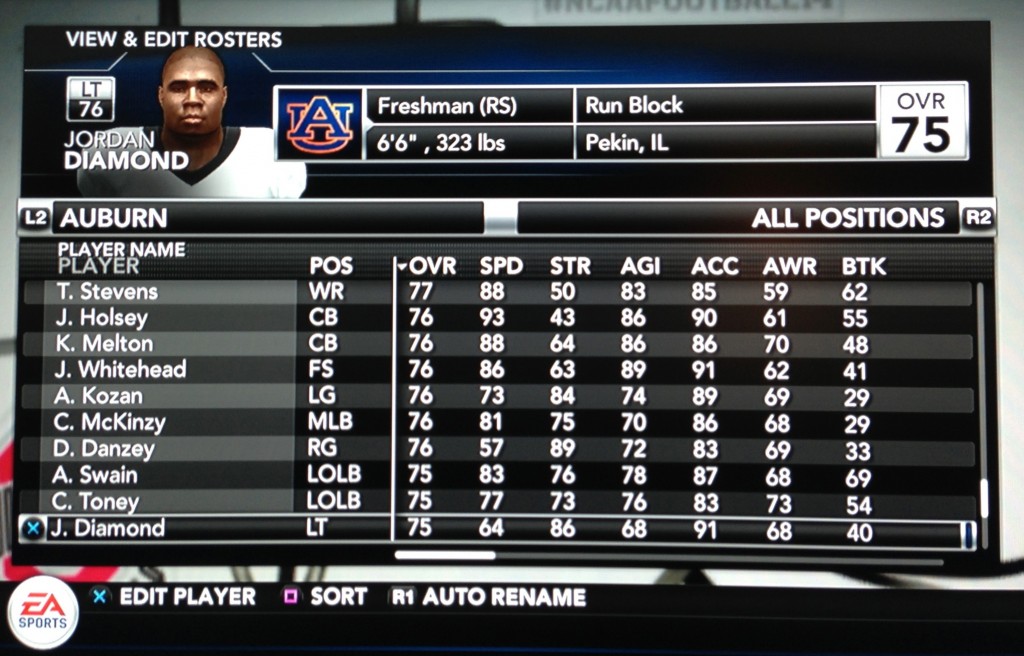 WR Tony Stevens, at the top of the 6th set, is listed as wearing #88 this year. Nope. That one’s taken, too. But there’s more… 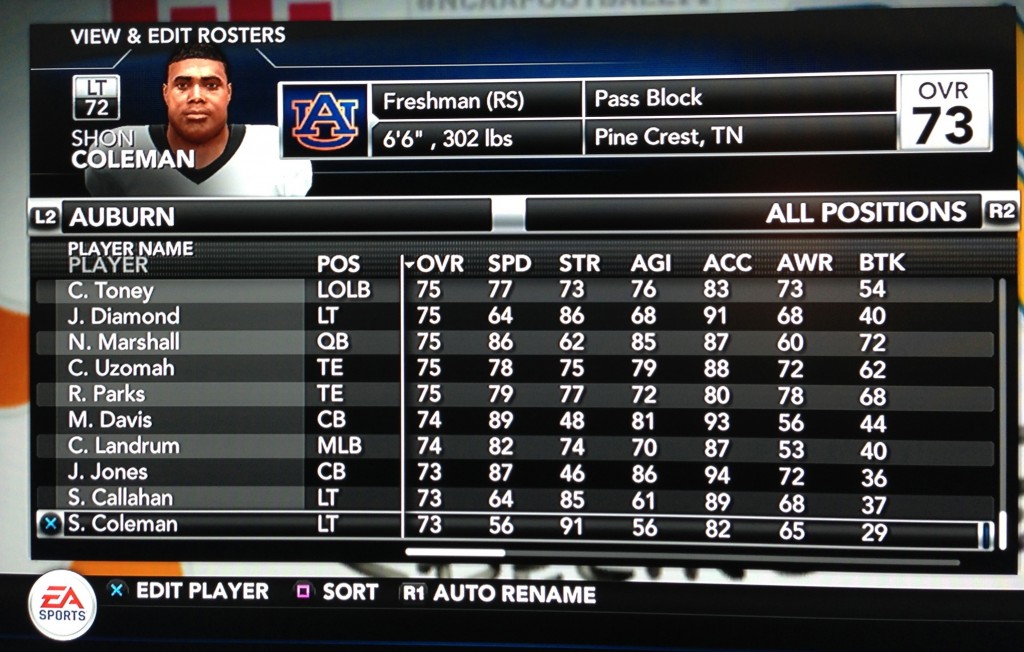 There, in the final set of players on the roster, is Nick Marshall. Possibly Auburn’s savior for the QB position this year, somewhere around the 65th best person on the team. And guess what number they have him in. Yep, #7. That’s the number he’s worn in the past, and the number he wanted, but he’s not getting it. He has tweeted recently that he will wear #14 this year.

Alright, so that’s how Auburn’s team will look in the game, so let’s talk about a few other Auburn-related aspects of the game.

UnderTheCode.com has released some gameplay footage of Auburn playing Alabama. It is a defensive struggle if there ever was one and includes an exciting ending. The game is being played in Bryant-Denny for some reason, but you’ll get the gist. Notice the #7 and #2 playing for Auburn. It’s weird.

The only other major aspect of the game with any Auburn appeal that I have yet to fully understand is the Ultimate Team mode. As I told you the other day, Bo Jackson is an available player, and after picking Auburn as my team, I was given freshman Jerraud Powers and freshman Ben Obomanu. That’s about all I know.

I will continue to try and figure out what that all means and what other Auburn players are available over the next few days. So far the game is a nice improvement from last year, but I think Ultimate Team mode and the ability to play with former players will set this game apart for Auburn fans. I just don’t know how to do it yet. Stay tuned.

These guys do a good job of correcting rosters.

Yep, they’ve been a big help so far. I plan on using theirs once they are up.

It was a PS3 user: UPDATEDprotoype

I saw a screenshot that has Carlos Rogers in the game!