The general consensus from Cam’s appearance on Letterman last night was that he was perfect, while the Top Ten he was given to read was found wanting. In true ‘Blogler style (with help from @jefoster), I asked the Twit-Fam to send me what they should have given the Cam-inator to read. Of course, I promised a prize (Chad Gibbs’s God & Football) to what I thought was the best. 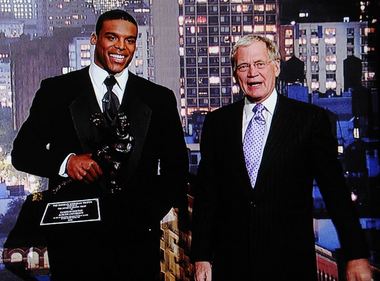 Most sent a better Top Ten (or five) from the category that was given (Top Ten things Cam Newton can say now that he’s the Heisman Trophy winner):

10. Urban Myer told me leaving UF would be detrimental to his health.
9. Thayer Evans did catch his wife writing me love letters.
8. Mark Ingram wish he could run like me.
7. Tim who?
6. Yes, I did see the YouTube video of the infamous guy at the airport.
5. LSU fans do smell like corndogs.
4. Yes, Nick Saban is short.
3. Megan Mullen is just upset she can’t make my CAMMY CAM JUICE for me.
2. Micheal Vick does call weekly for motivational speeches.
1. It’s great to be an Auburn Tiger!

10. Dear Santa: Thanks for the early gift. All I need for Christmas now is some ammunition so I can go duck huntin!
9. I love smiling. Smiling is my favorite.  :)
8. Sing with me now..”Every girl’s crazy bout a sharp dressed CAM”
7. Wise man once say: You gotta know when to hold ’em, know when to fold ’em, know when to walk away…know when to RUNnnnnnnnn!!
6. When tha devil be messin’, God be blessin…
5. It’s hard out here for a pimp… just ask Kenny Rogers.
4. Joe Schad reminds me of a line from Christmas vacation: Can I get ya something to eat? Refill ur eggnog? Drive u out to the middle of nowhere and leave u for dead?
3. Better hide yo Luck, hide yo James, and hide yo Moore..cause I’m winnin er’thang up in here.
2. People say I blew off an interview with FOX. If anyone is blowing FOX, its Thayer Evans.
1. Nick Saban spanked Greg McElroy when he discovered he was spending his practice time trying to uncover the recipe for Cammy Cam Juice.

5. Hey Kellen your girlfriend called and she wants to break up…its not you its me.
4. Does Mark Ingram even count?
3. Oh ok, if he must count it’s still Auburn 3, Alabama 1.
2. 28-27
1. The lollipop guild called and they want Nick Saban and LaMichael back.

10. The 2010 Heisman Trophy has a “no returns” policy attached.
9. This season, I ran over 11 cornerbacks but Nick Fairley beat me by eating 12 quarterbacks. (Nom!Nom!)
8. Will someone please tell Gary Danielson to quit calling me? I’m not available!
7. Mike Bianchi is the ethical, moral village idiot!
6. Hey Patrick Peterson, you still owe me for that ride to the endzone.
5. I’m still picking gamecock out my teeth.
4. Kenny Rogers, your songs are as awful as your roasted chicken.
3. Anybody got a Uhaul that I can borrow from New York to College Park, GA?
2. Is there really 105 illiterate Heisman voters? The test wasn’t that hard!
1. Suck this Bammers!

5.  Hey Joe Schad, where’s your source now?
4.  I was too good for Blinn JC, let’s be honest.
3.  Oregon, more like Boregon. LaMichael is going to LaLose.
2.  I didn’t want Bianchi’s vote anyway.  He sounds like a hoarse parrot.
1.  Best decision my dad ever made…(was having me)

10. I’m very sorry – I thought Nick Saban was the ball boy.
9. I spent a season sharing a locker room with Tim Tebow, and believe me, Tim Tebow is no Cam Newton.
8. No, AJ Green, I’m NOT selling my Heisman trophy!
7. Let’s just say it’s a good thing ducks don’t wear pants…
6. Someone please tell that Dos Equis guy to stop calling me for advice!
5. Hey Oregon, hide ya kids, hide ya wife…
4. Well, at least Lou Holtz can say ‘Thayer’ and ‘Thamel’ correctly.
3. Urban Meyer must have peeked at his 2011 schedule…
2. A agree, Alabama IS the best 3-loss team in the country.
1. No Mrs. Mullen, for the last time, you cannot have any of my Cammy-Cam Juice!

But my favorite, given the situation Auburn as been put through over the last month or so, was Jeremy L‘s list with a completely different category altogether:

The Top Ten Reasons Why Why Mississippi State Is Not Undefeated

10. Dan Mullen thought he was going to Florida.
9. School policy allows only one win per 1000 seats in Davis Wade.
8. Kenny Rogers was too busy recording his next album to focus on recruiting.
7. Cowbells…enough said.
6. Thayer Evans’ sources guaranteed at least 10 wins from the Bulldogs.
5. Joe Schadd confirmed Thayer Evans’ sources.
4. The Mississippi State Entrance Exam only requires that applicants count to eight.
3. They could only play Ole Miss once during the season.
2. It is impossible to use the words “champions” and “Starkville” in the same sentence.
1. #2!

If you missed this opportunity, but have what you think is a better Top Ten, feel free to leave yours in the comments section. You won’t win anything, but yeah whatever. If you really, really want to win something, then join the Official ‘Teach Me How To Lutzie’ Contest. Oh, and you wouldn’t have missed this opportunity if you were following me on Twitter.

Note: you guys are really funny.

Highlights of Auburn’s 59-42 Win Over Missouri

Ole Miss Review: The Hype Machine is Out of Order

10. My trophy is bigger than Dave’s torso.
9. Thamel was here today. He writes articles for the Times, and I wrote my autograph on his copy.
8. Add Dave to the list of people I’ve helped perform better than they actually are.
7. I wanted the band to play War Eagle when I was done, but they couldn’t get the rights for it. Just like on Playstation.
6. How many Mississippi State athletes have been on Dave?
5. Nevermind. Dave just told me Kenny Rogers was here a month ago. He sang “Lucille”.
4. Paul Schaeffer was actually a shaved Coach Yoxall in disguise.
3. Auburn’s football relations guy writes way better material than these New York interns.
2.They said cabs were hard to catch in the big city, but I caught one when you least expected it.
1. I’m going home, the lemonade sucks up here.