When I tweeted a request for questions early Tuesday morning, about 75% of them were asking me if I thought Gus would leave for Arkansas State. Well, now I can officially say yes, I’m pretty positive he would. Needless to say, I needed some new questions. Here are a few I got. 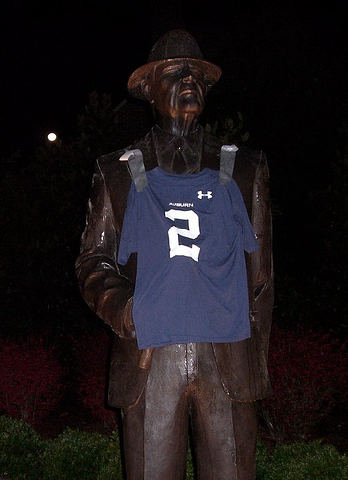 Shannon, who is becoming a regular on the mailbag, has a question about jerseys and lets us know of a ridiculous claim made by an Alabama fan that she works with.

My question is, how do you feel about the number on the jerseys that fans wear? Should we adorn a number in support of a current Auburn Tiger, a Heisman winner, or simply one of our favorite players from the past. I was told by a co-worker that wearing a #2 or #34 jersey was the equivalent of wearing a houndstooth hat. How do you feel about this?

First off, who was this coworker because I want to take them on for you. I’ve never heard something so dumb. There are so many things wrong with their line of thinking. For starters, Cam Newton (#2) played last year. He was still playing for Auburn less than a year ago. Alabama fans have taken this “living in the past” completely wrong, and I’m not surprised. Talking about games and players from last year is not living in the past. Obsessing over a coach from the 60’s, 70’s, and early 80’s or bragging about retroactive and completely fake championships from the 40’s is living in the past.

They’ve gotten so tired of us reminding them that they worry about the past too much that they just throw it back in our face anytime we mention anything older then five minutes ago. But was this person, in their attempt to call you out, actually saying themselves that wearing houndstooth is a bad thing? I mean if we’re dumb for wearing Cam jerseys, and they are saying it’s the equivalent to wearing houndstooth, doesn’t that make them dumb? Anyway…

As far as the number to wear, I say wear whatever you want. Heisman winners are always a good choice, and are typically the most recognizable numbers because they are usually retired and only one person is tied to them. The only Auburn jersey I have, which has never been worn, is #35. I bought it a few years ago because it was the number of Will Herring, who I went to high school with, but mainly because it was only $20. Sorry Will.

Ben wants to see Les and Nick in the octagon, and wants to know what I think about it…

Les Miles. Nick Saban. Bare knuckles brawl. Who ya got and why?

I don’t know who would win the fight, but I know who would win in general, and that would be the world. I can’t think of seeing anything better than the Angry Elf taking on the Mad Hatter. Wait, what is this? Lord of the Rings versus Alice in Wonderland? Oh, you know who wins that.

You don’t mess with an upset elf. Have you seen how they handle a bow and arrow? Not to mention any character in Alice in Wonderland is so hopped up on acid that they’d either refuse to fight or forget that they were fighting after a second or two. So I guess, as much as I don’t want to say it, I’d say Saban the Angry Elf would win because of his superior bow skills.

Wow, I really went off the deep end on this one, or maybe you could say I went down the rabbit hole…

Todd has a serious problem at home…

Any idea where I can get one of the argyle visors I’ve seen on the sidelines? My wife is KILLING me for one.

First off, call the police immediately. Domestic violence is no joke, especially if she’s attempting to take your life over a hat. Imagine what she’ll do to you for something like a Nintendo Gamecube or something awesome like that.

Once you have her under control, let me call the fashion police for you both because those visors are about the ugliest things I have ever seen. Spoiler alert, but in a future post I plan to give the top 10 reasons as to why Auburn struggled this year and the guy wearing that argyle visor on the sideline is one of them. Not the actual guy, but the visor itself. Seriously, they are worse than the absolutely terrible Under Armour hats that were put out this year, and that’s saying a lot.

Now that I’ve completely insulted you and your wife, I’m not really sure where you can get one. I don’t see them online anywhere. Maybe it’s like the exclusive white Chizik jackets that don’t get released to the public until the next season.

Interviews from the Red Carpet at the 2011 ESPYs

I couldn’t disagree with you more on the argyle visor. LOVE IT.

I’ve seen the argyle hats and visors for a couple of years now. I usually see them at hibbets or what used to be the hat shack.

The argyle visor can be found at most of the bookstores and my husband actually tried it on at Toomer’s Drugs one Sat. We didn’t buy it but we both loved it when we saw it on the tv.

Old-Style baseball cap…name brand is slipping my mind (just had it) – maybe College Gameplan. Not sure…anyway…snap back, form-fitted white with College Logo in a circle with the school name in a straight line underneath. Miss my cap that was dingy and sweat-ringed with a bill that could be folded 3-4 times. So comfortable.

I completely agree that the argyle visors and the “official” Under Armour hats worn this year were both completely hideous. They were absolutely awful. But if any fellow fans insist on buying one, they do sell both of them at the Auburn University bookstore, I see them there all the time. Although it may be too late for Christmas…