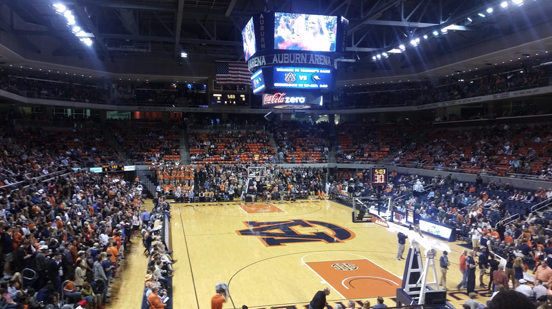 The Auburn Tigers are undefeated both in-conference and overall so far this season. At 15-0 – at the time of writing– War Eagle stands strong, sitting in first place in the SEC. They were between the Kentucky Wildcats and LSU Tigers, all who are all 3-0 in SEC play.

It’s hard to believe that we are already in the middle of January and inching ever closer to the conference tournaments and then … March Madness.

The Tigers are ranked No. 12 in the nation by the predictive power rankings but the AP has them at No. 5 through Week 10. That said, we could see that shift when the new rankings come out on Monday. That said, the predictive algorithms and the people who make expert college basketball picks have the Auburn Tigers with over a 97 percent chance of getting an NCAAB bid into the big dance and a roughly a 2 percent chance to win it all.

The next game is Wednesday, January 15th against the Crimson Tide.

The Crimson Tide are coming off a Saturday loss to the Kentucky Wildcats. The odds had the Wildcats as 10 point favorites over the Tide and that is exactly how the cookie crumbled. The Cats beat the Tide 76-67, proving the oddsmakers are smarter than they look.

On the flip side, the Auburn Tigers got a win over the Georgia Bulldogs. They smashed the dogs 82 to 60 and easily covered the 10.5-point spread. Alabama should be an easy task on Wednesday. The Tide is just 8-7 and although they are 1-2 in the SEC, they should be less of a challenge than the Bulldogs.

Going onto their Saturday game, the Tide has allowed 79 points per game. On the offensive end of the floor, Alabama has a potent scoring unit, No. 4 in Division I ball at 84.4 points per game. However, the Tigers score nearly as much, 82 and change per game but have a much tougher defense, allowing 66.7 points per game.

So what can we expect?

We should expect the Tigers to put up around 80 points and the Tide to not get much past 70. I see this one as a 68-81 Auburn victory in Alabama.

The Gators are 4th in the SEC and will present a bit more of a challenge than the Tide, especially since the Tigers have to go into the swamp to face them. However, on Saturday the Gators underperformed as two-point favorites against Mizzou, who crushed them by 16 points. Florida has a stout defense; one that allows just 65 points per game – that is before we add those Mizzou stats to the number.

But the problem with the Gators is they only score a hair under 74 points per game. When their defense fails them, they and up getting crushed, as we saw with the Missouri Tigers. With this game, we have the opportunity to see a lower scoring affair. But Mizzou only averages a bit over 66 points per game on offense, and they obliterated the Gators. So, this one really depends on whether Florida shows up on that side of the hardwood or not. I tend to think that Auburn’s superior offense is going to cut through the Florida defense like a hot knife through butter. That said, they may hold the Tigers underneath their average scoring stat. I predict a 65 to 76 Auburn win in this one.

The Tigers will remain undefeated in the SEC and continue to put a stranglehold on the SEC this week. We should see them go into the conference tournament as the top seed. If they continue this way, they are likely to win the SEC and go into the big dance as high seeds as well.

Kentucky is always a threat to steal the SEC tournament away, they are ranked No. 14 in the AP and No. 13 by the coaches. Meanwhile, Auburn is No. 5 in both through Week 10. It will be interesting to see what the rankings look like as we move into Week 11.

Stay tuned, it’s going to be an interesting few weeks of play as we close out January and move into February.

Reasons Why People Love Football More Than Any Other Game

Cosmic Justice Will be Served In Atlanta at the Peach Bowl