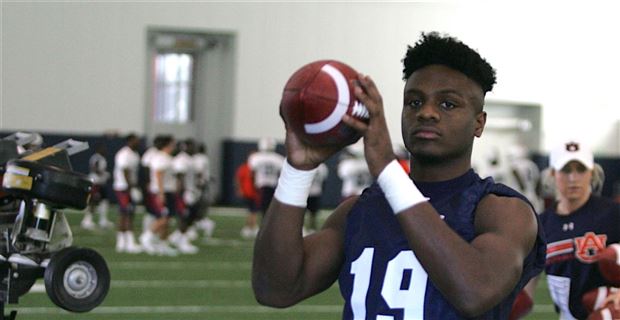 Fall Camp has seen its fair share of success. Several true freshmen have used the opportunity availed them to shine, though all anyone can talk about these days is Igbinoghene. The Auburn betting odds for this college football season are suddenly looking even better than anticipated.

Do not expect to forget the name ‘Igbinoghene’ just because you’re having a hard time pronouncing it. Noah has left a lot of analysts speechless with the waves he has been making.

Keep in mind the 7 other true freshmen on offense each one of whom has the capacity to astound and impress. And yet all anyone seems to care about is Noah Igbinoghene, and for good reason.

Everyone agrees that Noah will be playing in the fall. It isn’t even a debate. More importantly, it would be shocking if Noah failed to land a significant playing role. Noah came into the picture as the lone true receiver in the 2017 signing class. And he did not just meet expectations in the fall camp. Whatever Noah did was enough to get the coaching staff on his side, to the point where no one has made mention of a redshirt.

Remember, Auburn still has eight scholarship receivers. Head Coach Gus Malzahn threw his weight behind Noah. He admitted that the young athlete caught his eye almost immediately. Gus could not ignore the skill set on display, not with the explosive performance Noah delivered.

Gus sounded pretty convinced when he suggested that Noah Igbinoghene would probably be one of the most important players at Auburn this year and that the athlete would play a role in helping the Tigers’ achieve their objectives.

Gus is eager to have Noah acclimate to the atmosphere. The sooner he becomes one of the guys, the better. Noah wasn’t without his challenges but the coaching staff chocked that up to a lack of experience, an issue that can be remedied.

Noah is fortunate because he is eager to learn and he works really hard to protect the ball. The athlete has even made an impact on his fellow players. Eli Stove behind whom Noah has been working described him as a little brother that seemed to bring the same skill set to the table as he did; only Noah had the advantage of speed and agility.

Eli feels like he can relate to Noah because of their similar approaches to the game, specifically when it comes to their shifty performances.

Things couldn’t look better for Noah Igbinoghene than they do right now. The absence of John Franklin III worked in his favor, giving Noah the room to breathe and to express himself on the field.

Receiver Coach Kodi Burns commended Noah for showing an incredible ability to plug into the team. Kodi also thought the player showed a lot of toughness and courage. No one ever blames freshmen for showing fear and apprehension when they first arrive.

Noah did not seem to have any of those problems. He did what he was told to do when he was told to do it, and he seemed to do it well. Noah will go very far so long as he keeps making progress. The worst thing he can do is stagnate.

How to win in Darts?

Offense the key for Auburn this season… and they know it

This kid is making all the right moves. Let’s hope it keeps up!