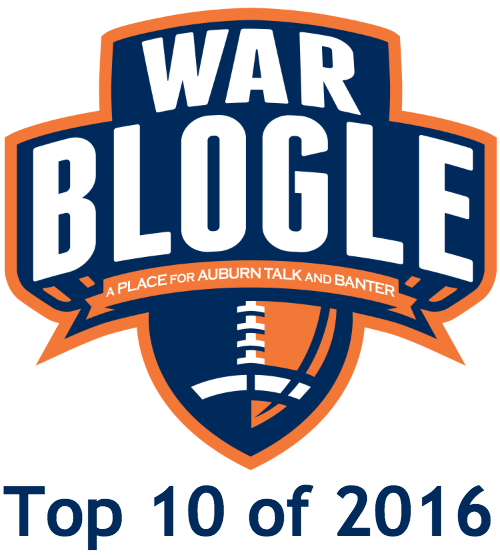 Let’s be honest. 2016 sucked. And I’m not just talking about all the celebrity deaths. The views on this here webspace were some of the lowest of the last few years. Sure, 2010 and 2013 have skewed things, but there just wasn’t much to excite the masses, and some of that is my fault.

As I’ve always said, this site goes as the football team goes, and that 6-game streak was nice, but there weren’t Kick Sixes or tipped pass touchdowns to get you looking for anything and everything like the stuff you’d normally find here.

I also have to admit that posting was a little low over the year. Raising two growing boys will do that. But I did add new features like Stranger Things that you seemed to like, and I got ideas for 2017, man. Ideas that will fix the low putout and the low turnout. Just wait and see.

Either way, all things Blogle did keep growing in 2016, and hopefully that will continue in 2017. So without further adieu, these were the top 10 WarBlogle.com posts of 2016, and a few actually including my very own writing.

During Auburn’s beatdown of Arkansas this past Saturday, former Auburn basketball legends were introduced on the field. Charles Barkley was one of them.

After his introduction, Bo Jackson showed up on the BOOMtron and joked at the fact that he had a statue on campus on Barkley didn’t. Then he announced that Charles would be getting his own statue. It was really cool.

I don’t know how it started. I don’t know who sings the song or what it has to do with mannequins. But I do know that there is currently something called the Mannequin Challenge, and it’s exactly what it sounds like. Someone videos a group of people in poses like mannequins. I guess the challenge aspect is seeing if you can stay frozen without breaking.

The Auburn football team has beaten everybody else they’ve played in the last 6 weeks, so they’ve decided to beat this challenge as well. It looks like it was filmed after yesterday’s game or after tonight’s practice, and it includes the entire team, therefore making it the best so far.

Saturday was just weird, man. Auburn-LSU always is, but usually it’s just connected directly to the game. I mean, we’ve seen a huge fire outside the stadium before, but this is getting ridiculous. Let’s go through the day and what made it the weirdest Auburn football day I’ve probably ever experienced. We’ll start slow and work our way up.

Someone inadvertently set the one of the Toomer's Oaks on fire. It's out now, but all the toilet paper is burned off pic.twitter.com/0cSGRUBEFZ

Kenny Chesney and a few friends will be kicking off his Spread the Love Tour this Saturday night. You can get all the details and see the stage setup here.

Even though it’s just Wednesday, he’s already in town. He’s just in that alternate universe where the University of Auburn thrives. You’ve heard many recruits commit to that school, so why not Kenny?

I mean, technically, it is the university in Auburn, so it’s the University of Auburn. Right?

We’re ready to kick off the #spreadthelovetour here at @AuburnU. Can’t wait for your energy, @NoShoesNation.https://t.co/nRcQ5FyU7D

I am typically not a huge traditionalist when it comes to uniforms. I don’t want a major permanent change ever, but a small tweak is fine. And when talking about baseball, I don’t really care at all as long as they aren’t ugly.

Well, the rumors were true. Auburn will be wearing alternate uniforms this weekend against Tennessee. Frankly, and I know it’s out of character for my homerific self, but they are ugly and don’t make sense.

You may have noticed that what I call “pocket schedules” have been popping up around Auburn the last week or so. They are the true sign that football is getting real. It’s close.

Well, I picked one up at the Great Clips over the weekend and noticed that a few things have changed with Auburn’s clothing schedule. You see, for people that look for  less important things to blogle about, these schedules have been good for content. They usually tell us when the “All Auburn, All Orange” and “True Blue” games will be happening. This year, that has changed. 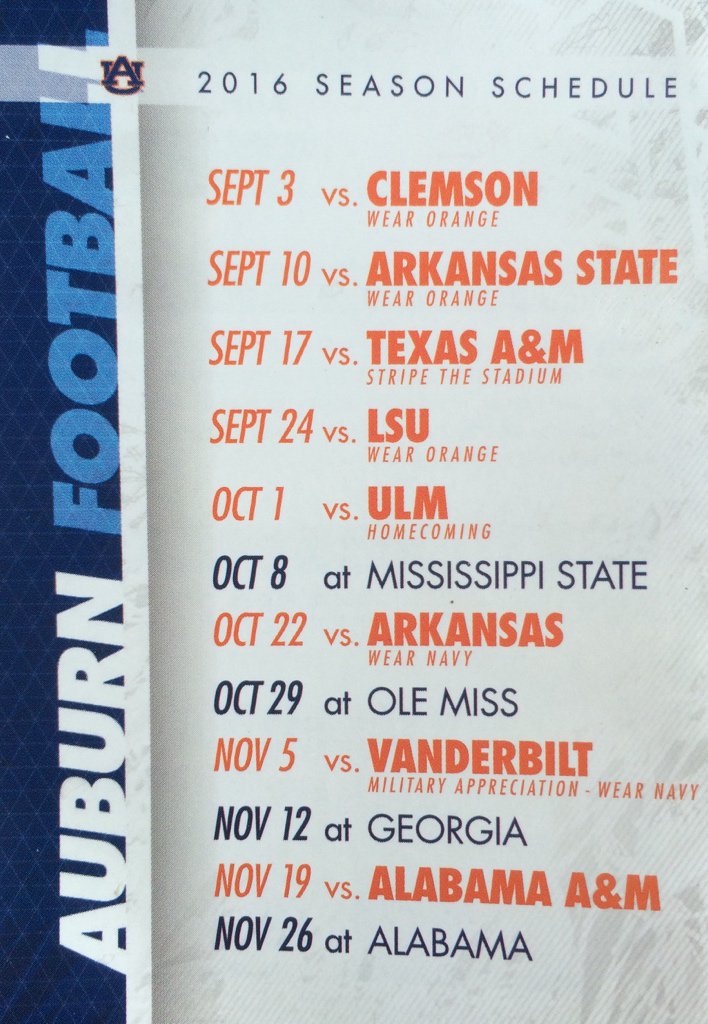 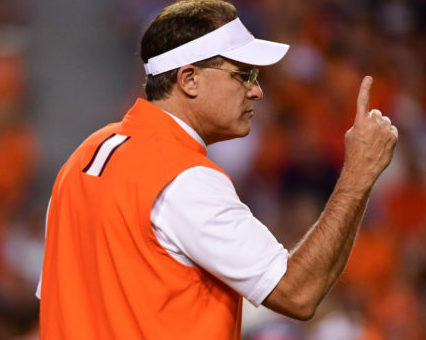 The 2nd-ranked Clemson Tigers came into Jordan-Hare Stadium last Saturday night as a 7-10 point favorite to beat the Auburn Tigers, but if you talked to most fans of any SEC team, Auburn probably didn’t have much of a shot.

Over the course of the week, a few people softened on the idea that it would be a blowout, but it was obviously due to them reading my preview and realizing that blowouts are rare under the lights in Jordan-Hare Stadium. Even still, nobody, even the strongest of homers, thought an Auburn win would be very possible.

Prior to the Auburn-Clemson, four members of the Silver Wings Parachute Team jumped from a perfectly good airplane and navigated their way through the friendly skies above Jordan-Hare Stadium. Some shot sparks from somewhere on their body. All of them landed within yards of the AU logo on the 50-yard-line. It was awesome.

What’s even more awesome is that one of them wore a GoPro through the whole thing. 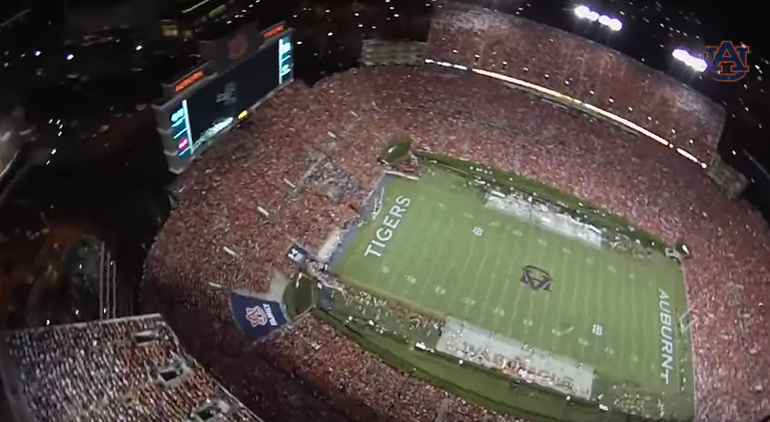 For the seventh – SEVENTH – consecutive year, the ‘Blogle will be your no-frills stop for all things Auburn on National Signing Day. In the age of social media, every signing is viral within seconds. No matter when or where a guy makes his decision, every college football writer within 100 miles posts the same tweet, which does nothing but make your Twitter feed unbearable. It’s their job, but on a day like today, ain’t nobody got time for that. 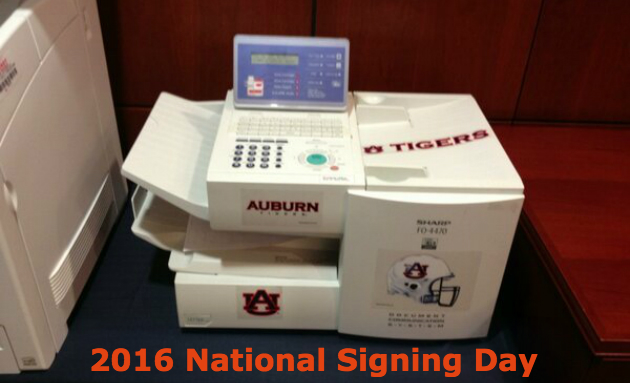 On Saturday night, Kenny Chesney, Miranda Lambert, Sam Hunt, and Old Dominion will take the stage in Jordan-Hare Stadium as part of Music and Miracles and Chesney’s Spread the Love Tour. Despite what some outlets are putting out there, it is most certainly not the first concert in Jordan-Hare Stadium. I was at The Beach Boys/Tonic/Pat McGee concert in 2001. However, it is definitely the largest non-football event that will have ever happened on those hallowed grounds.

So that’s it for 2016. Good riddance. Thanks for everyone that stopped by. 2017 will be much better.