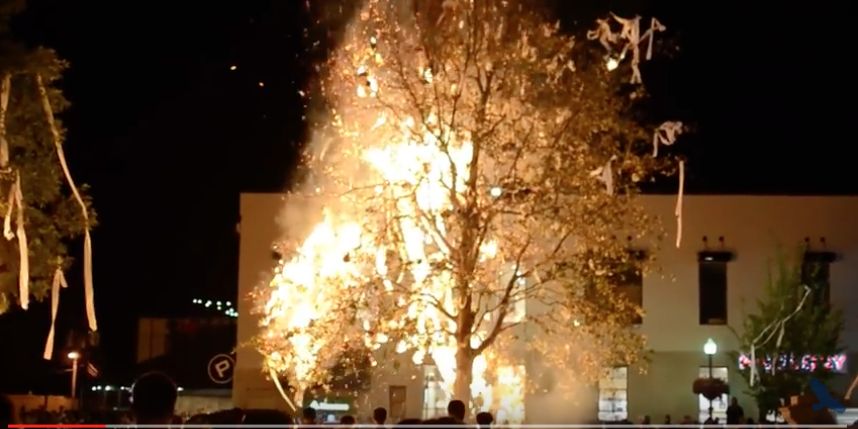 Saturday was just weird, man. Auburn-LSU always is, but usually it’s just connected directly to the game. I mean, we’ve seen a huge fire outside the stadium before, but this is getting ridiculous. Let’s go through the day and what made it the weirdest Auburn football day I’ve probably ever experienced. We’ll start slow and work our way up.

Friday night, I was made privy to some information that Karl Malone would be in town for the game. His son, KJ Malone, plays offensive tackle for LSU, so it made sense.

The Mailman Karl Malone stopping by my friends tailgate at Auburn. How cool is that! pic.twitter.com/wKC1i2sTu9

So yeah, he was in town for the game. But then he spoke to the Auburn basketball team in full LSU gear. Kinda weird, kinda funny. I know this isn’t THAT strange yet, but let’s keep going.

Lucky enough to have Karl Malone speak to our guys today! #Mailman pic.twitter.com/vPUUVTI0ub

Apparently, the NBA loves Auburn, because it didn’t stop with the Mail Man. I was told while tailgating that Mark Cuban had just landed in Auburn for the game. I had no idea why and no idea if it was true, but just like Karl Malone, it was.

Met my business idols today in Jordan-Hare! 😭🙌🏾#WarEagle friends and I hope you enjoyed the game! 💙 @mcuban @sacca #goals pic.twitter.com/IVd6BzqDLi

According to those around him, Cuban was in the area visiting one of the businesses he backed on Shark Tank and wanted to visit one of the greatest college football atmospheres in the nation. Oh, and that other guy with him is Chris Sacca, who has thrown his money at small companies like Twitter and Uber. He’s also been a guest “shark” on Shark Tank.

But who was that other guy. Oh, that’s just Bill Simmons. Double oh, he and Cuban were wearing the same hat I had on that day. We have lots in common.

You may remember Bill Simmons as the guy who tweeted this pure gold.

Congrats to Auburn for winning the 2011 title. And congrats in advance to Oregon for winning it retroactively in 2013.

Or the guy who didn’t watch the Kick Six. I’m glad he got to visit the home of the greatest play in football history.

I didn't get to see the Alabama-Auburn game, did I miss anything?

Once the game started, it got even weirder as Ashley Ward, photographer for Auburn and current girlfriend of former Auburn Tiger Kris Frost, in an attempt to win a bet that she could catch a kickoff, took it right in the face.

Oh boy. Have at it internet world. https://t.co/D0wKxioNzC

Here’s an even better view.

And here she is letting us know just what she was thinking and that she is okay.

You’ve watched the end of the game 100 times by now, but here it is again. The refs never should’ve let the play run, the wide receiver wasn’t set, which would have been another illegal shift, and there was an ineligible receiver down field. But don’t tell the announcers that. THE TIGERS ROAR.

As I settled in for the night, and just seconds after my traditional #bedtimepoetry tweet, I was notified that a drunk Auburn fan accidentally set the one of the trees on fire.

Someone inadvertently set the one of the Toomer's Oaks on fire. It's out now, but all the toilet paper is burned off pic.twitter.com/0cSGRUBEFZ

But after some sleuthing, it appeared that it was some possibly drunk person that didn’t do it on accident.

This video shows person walk up to tree and light toilet paper on fire and walk away quickly. (via @austingscott) pic.twitter.com/LVG0GXTppn

After some more sleuthing, a brave heroine stepped in to try to bring this guy to justice.

Video of a girl pointing out the guy who lit the toilet paper on fire before he ran off. (via @shanesrew_jacks) pic.twitter.com/2pH3nLhsgG

And here she is, Ray-Ban-less but happy she got the guy caught.

And once the perp was caught, we learned that he was a 29 year old non-student from Germany. He was drunk because he was arrested for that, too.

We’ve seen seismographs pick up crowd roars, phantom whistles, and a barn burning 20 years ago, but this full day may take the cake as the weirdest Auburn-LSU game ever. Did I miss anything?

What does Wiest mean in German?

“Will never receive service in a restaurant or bar in the City of Auburn, Alabama for life”

That is what it means. War Eagle.