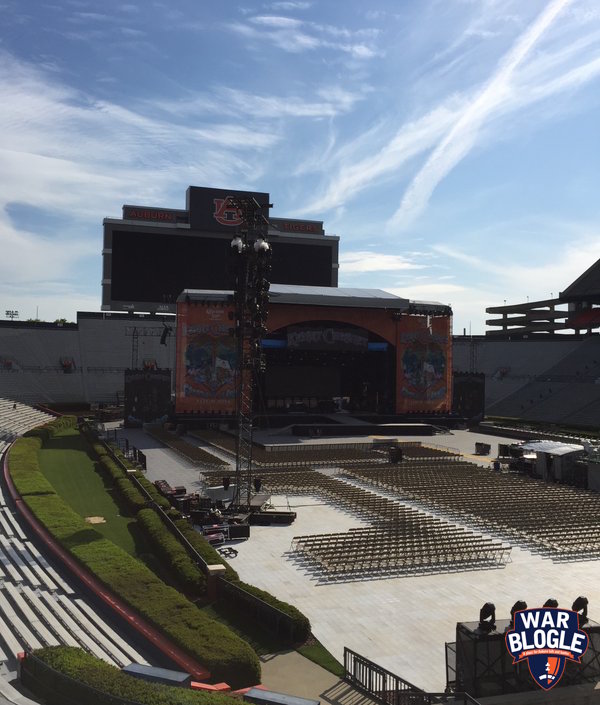 On Saturday night, Kenny Chesney, Miranda Lambert, Sam Hunt, and Old Dominion will take the stage in Jordan-Hare Stadium as part of Music and Miracles and Chesney’s Spread the Love Tour. Despite what some outlets are putting out there, it is most certainly not the first concert in Jordan-Hare Stadium. I was at The Beach Boys/Tonic/Pat McGee concert in 2001. However, it is definitely the largest non-football event that will have ever happened on those hallowed grounds.

This past weekend, as the setup of the stage was taking place — a week in advance — I was lucky enough to take a walk around the stadium and view the magnitude of the process. Dozens of men in hard hats were building what looked like permanent structures for what will actually end up being pieces of huge six-hour show. It’s crazy.

Check the gallery below, but here are a few details on the tour and just how big this event will be. Like Kenny Chesney and country music or not, this is huge deal for Jordan-Hare. He’s sold out Gillette Stadium (where the Patriots play) twice, and he’s coming to play in little ol’ Auburn. It’s big.

And as far as food and beverage, this will be the first time, as far as I know, that alcohol will actually be sold in Jordan-Hare Stadium. Here are a more details from AU Concessions:

Tickets are still available at Ticketmaster. The gates open at 4pm CT. Old Dominion goes on at 5pm, with Sam Hunt at 5:55pm, Miranda Lambert at 7:05pm, and Kenny closing at 8:50pm. 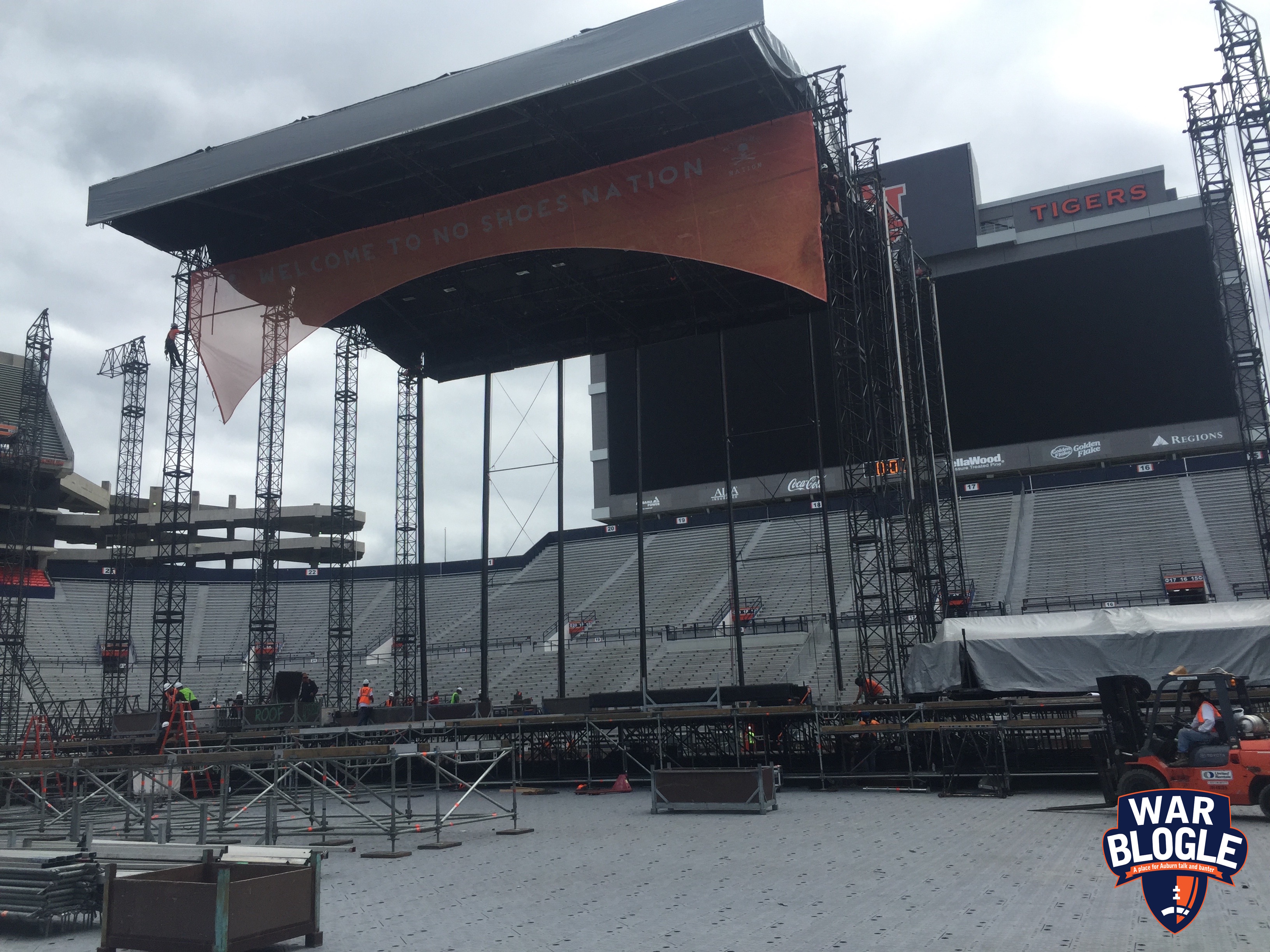 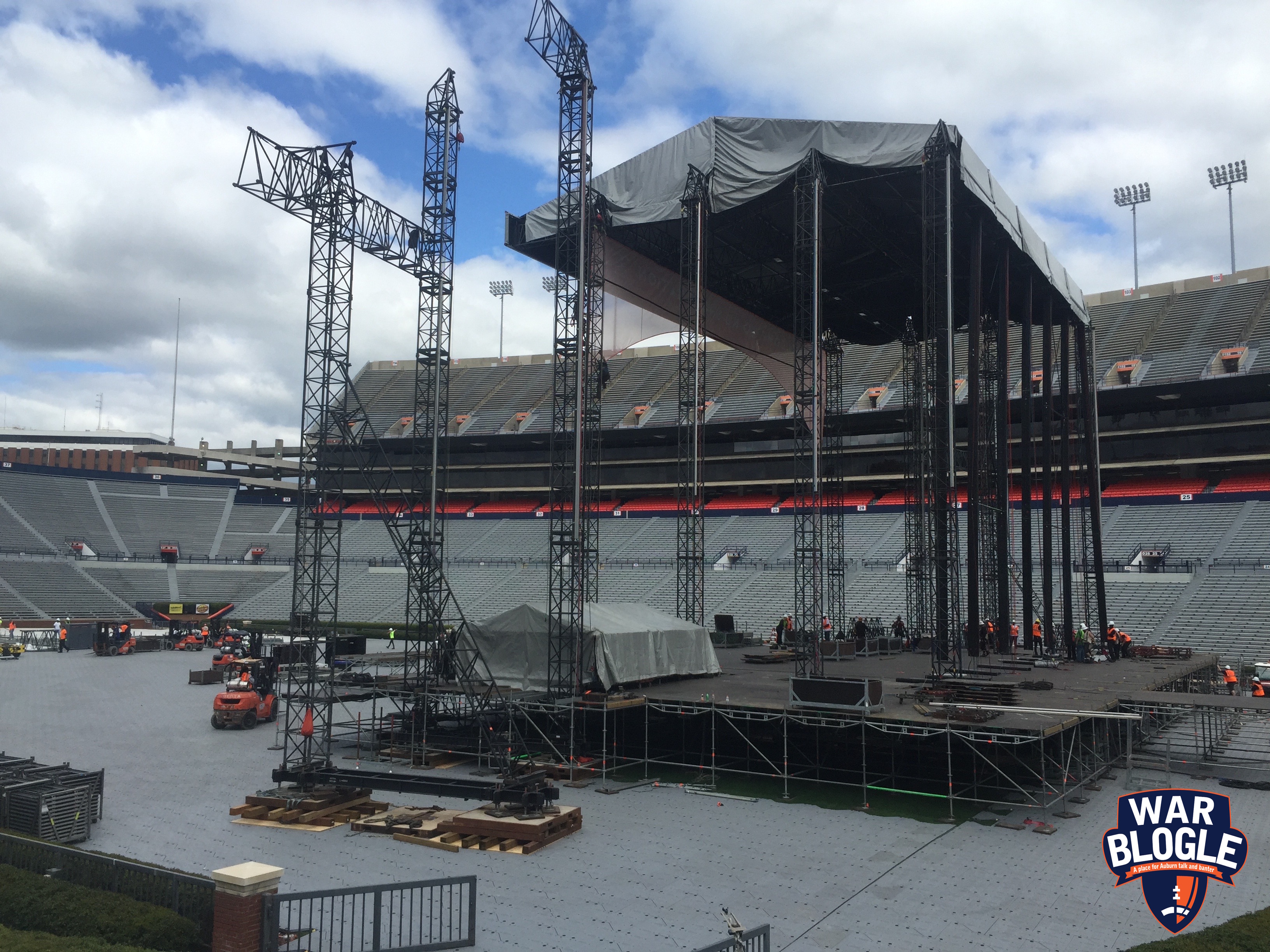 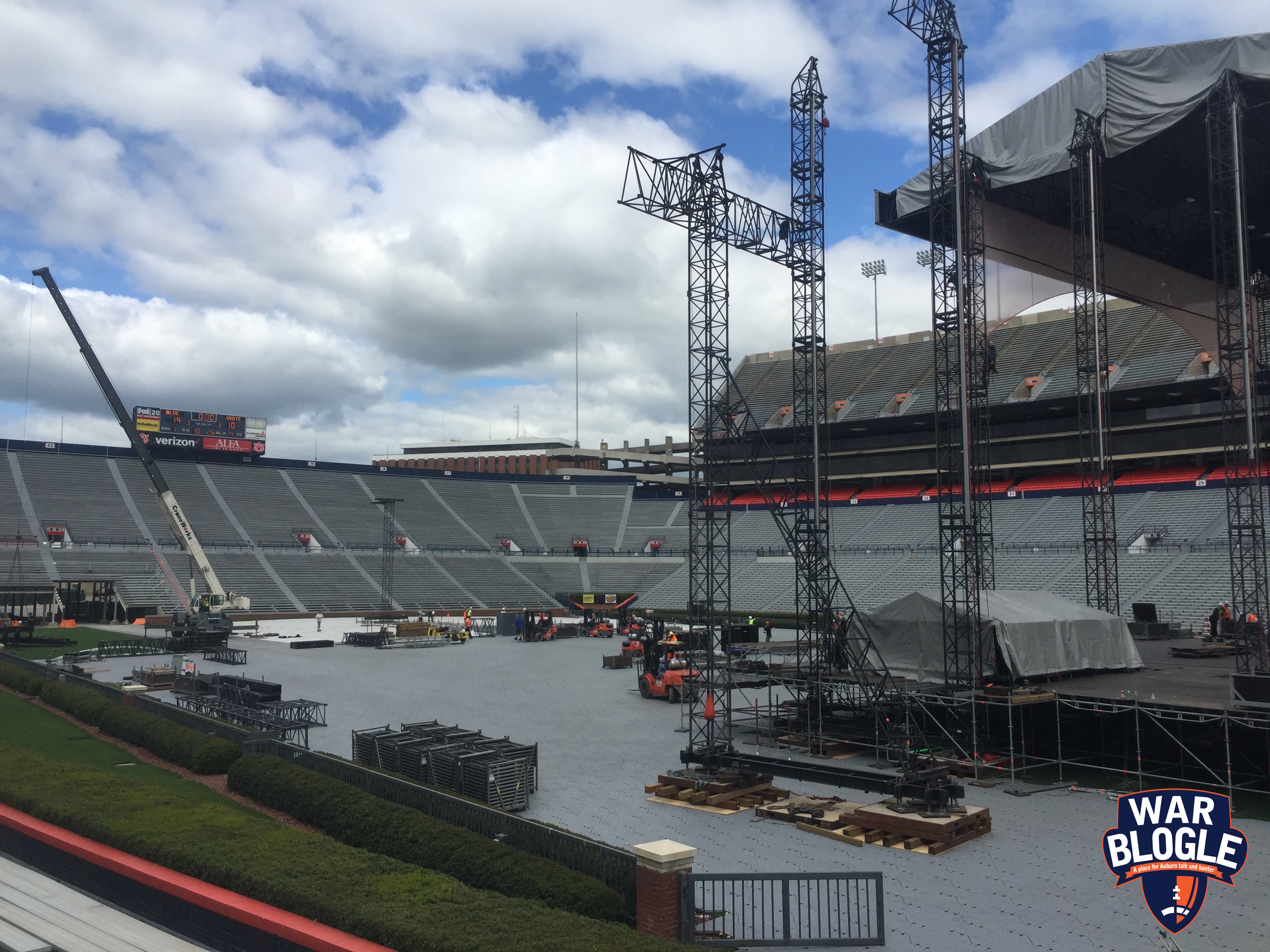 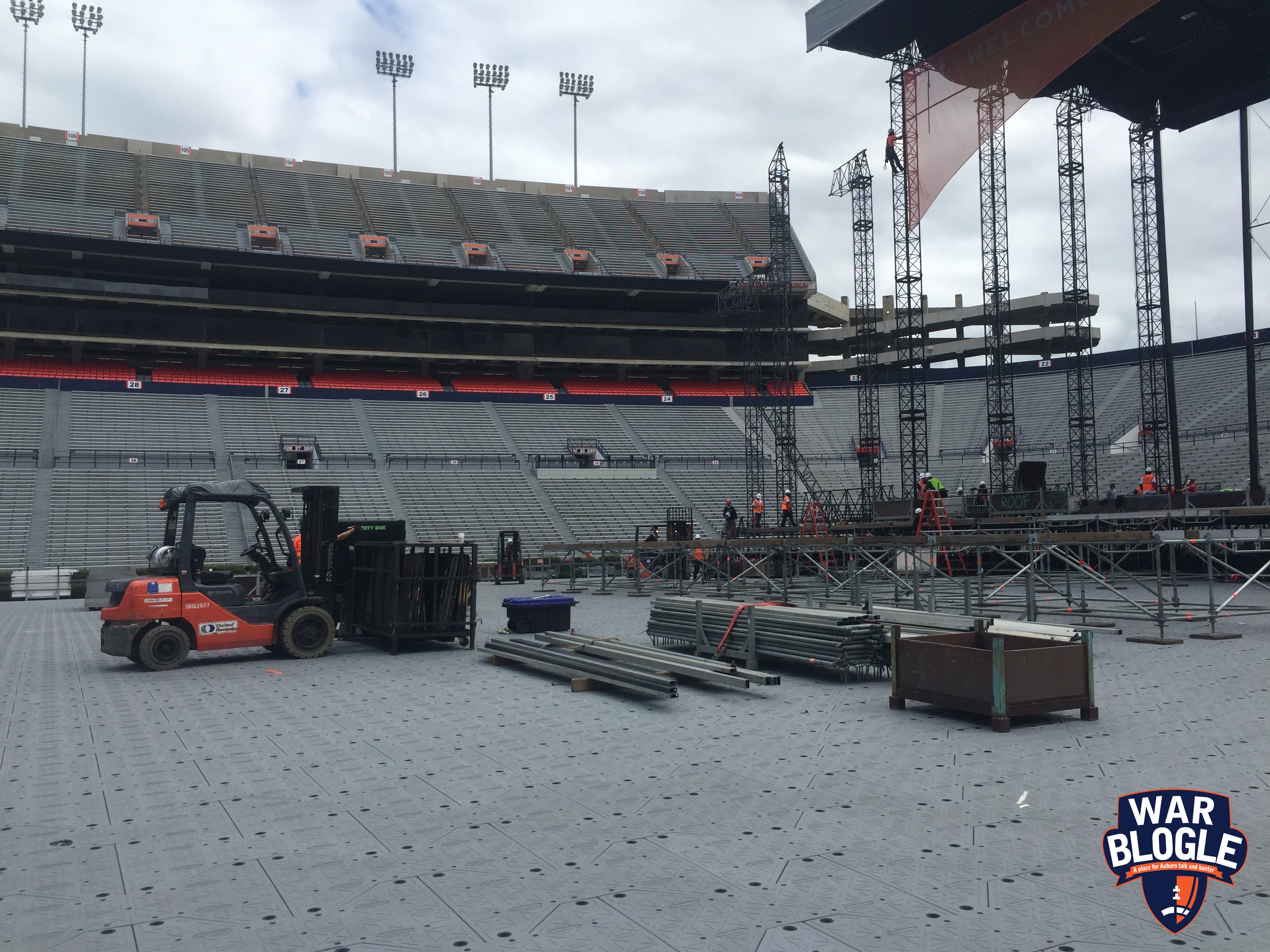 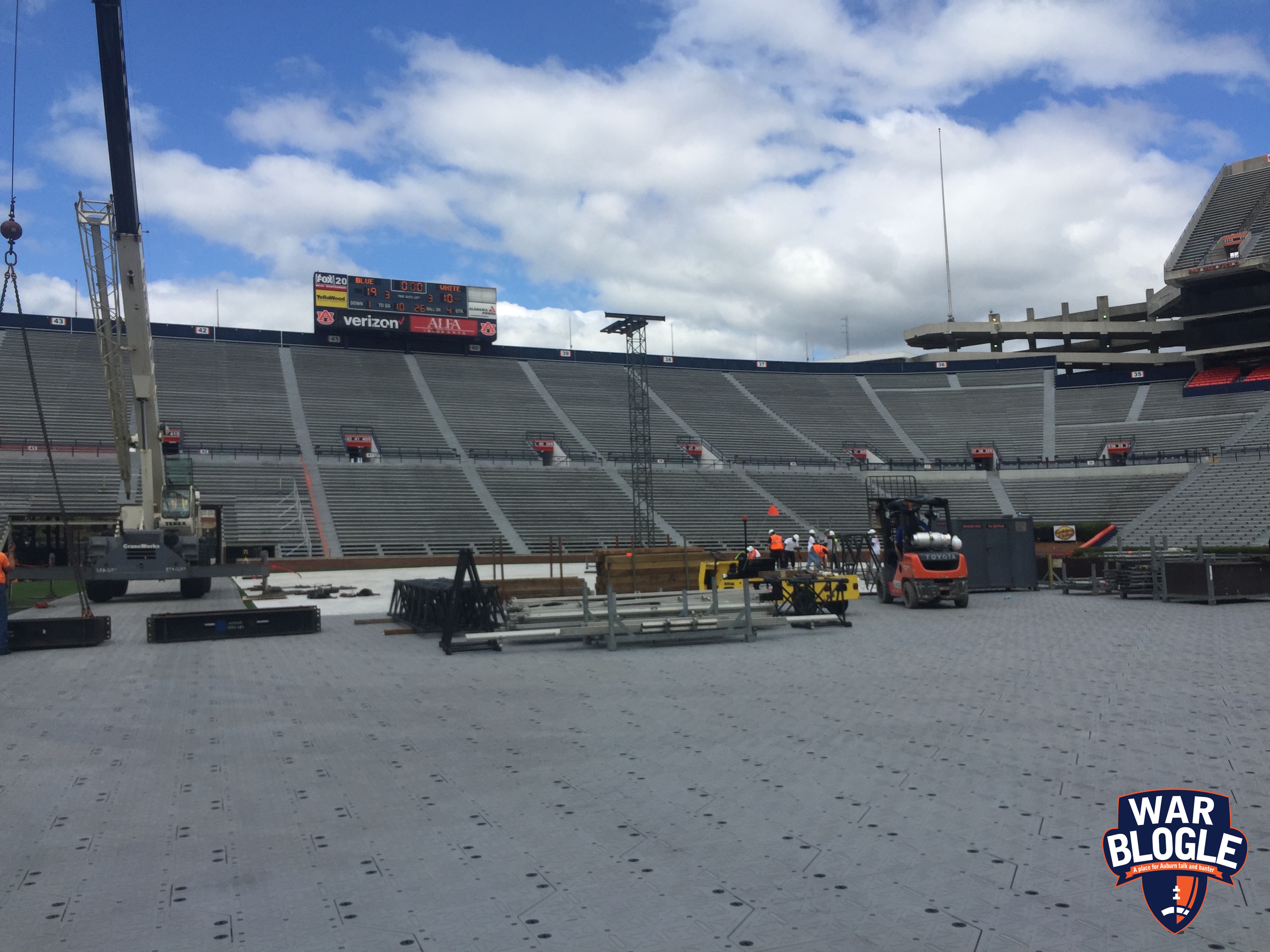 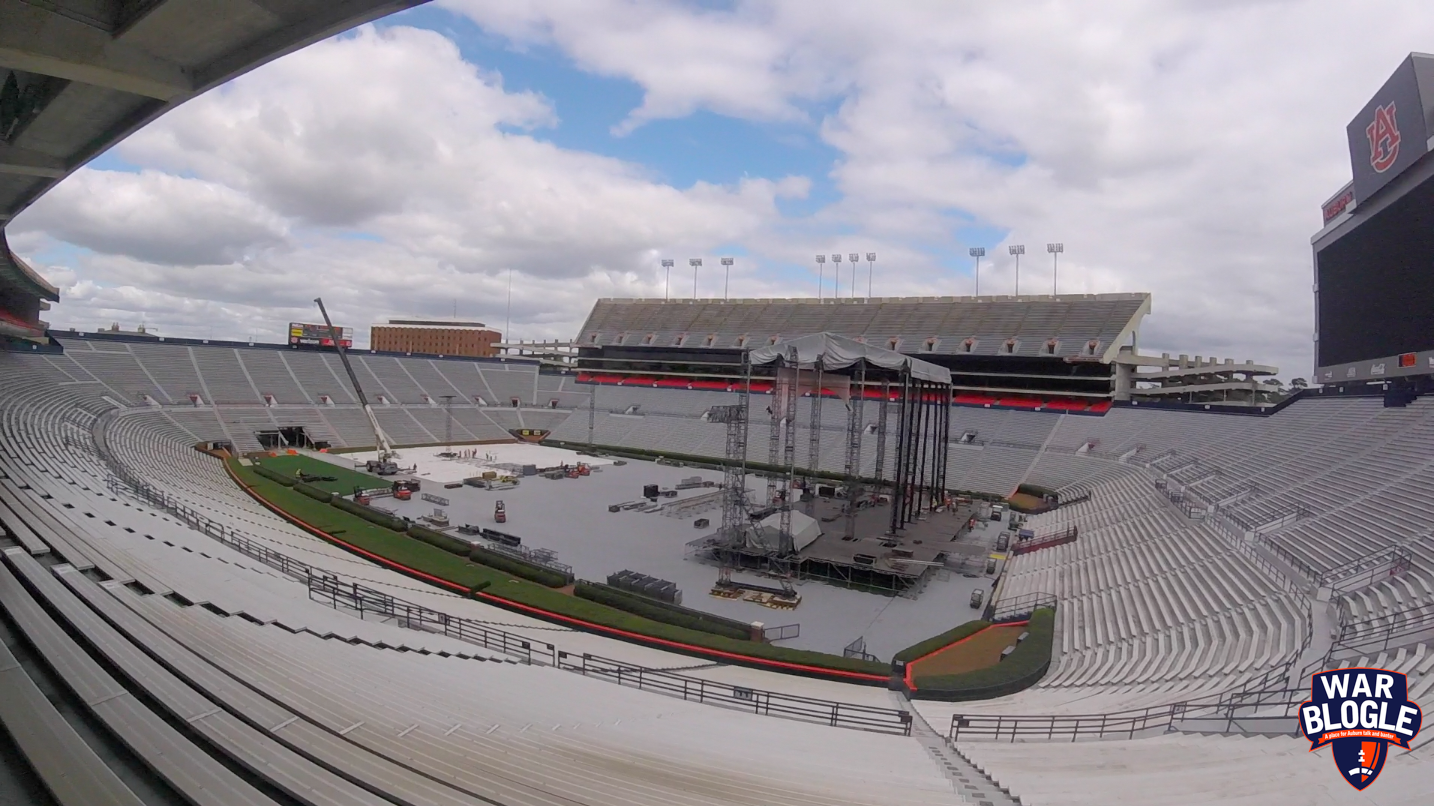 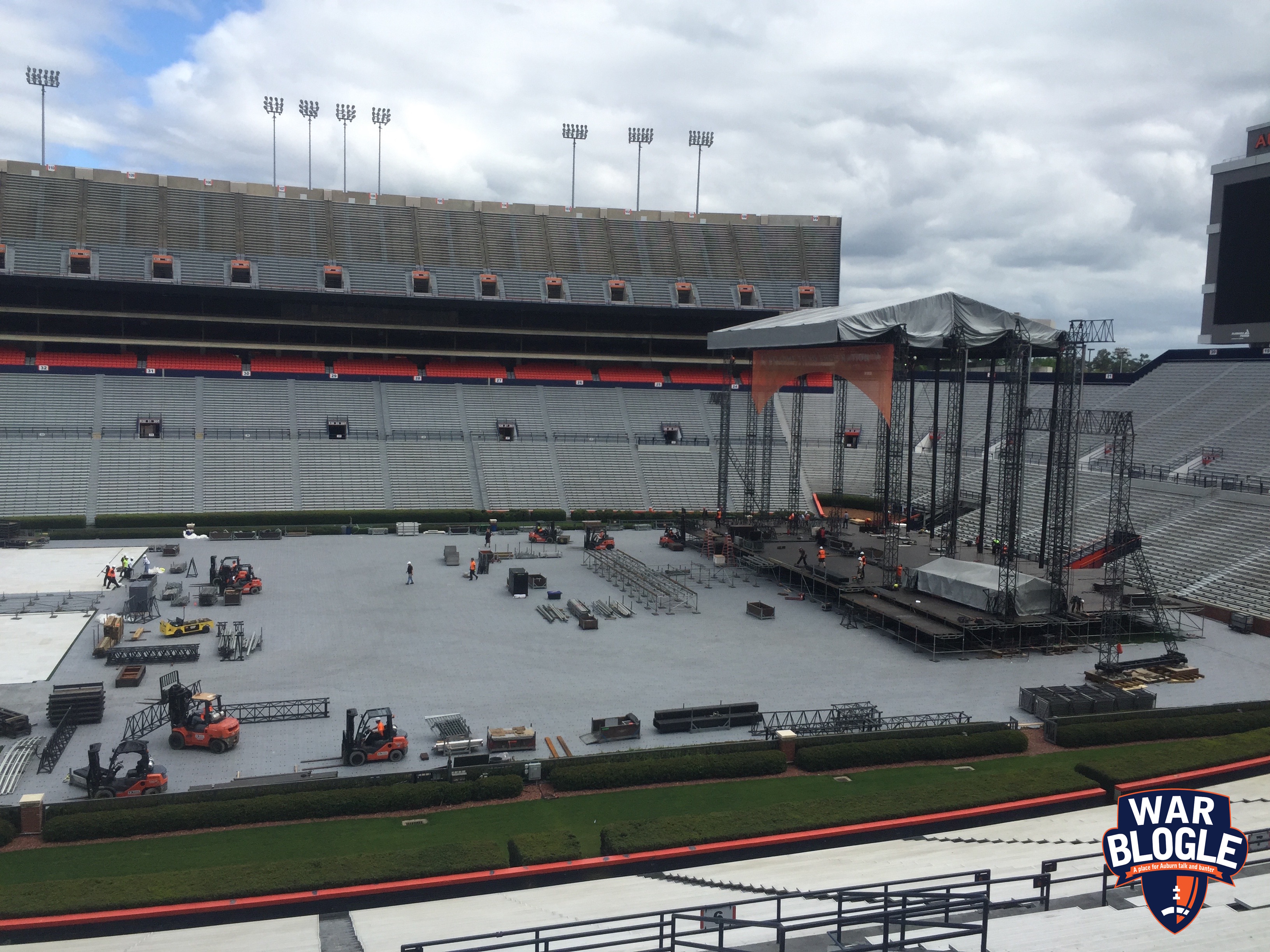 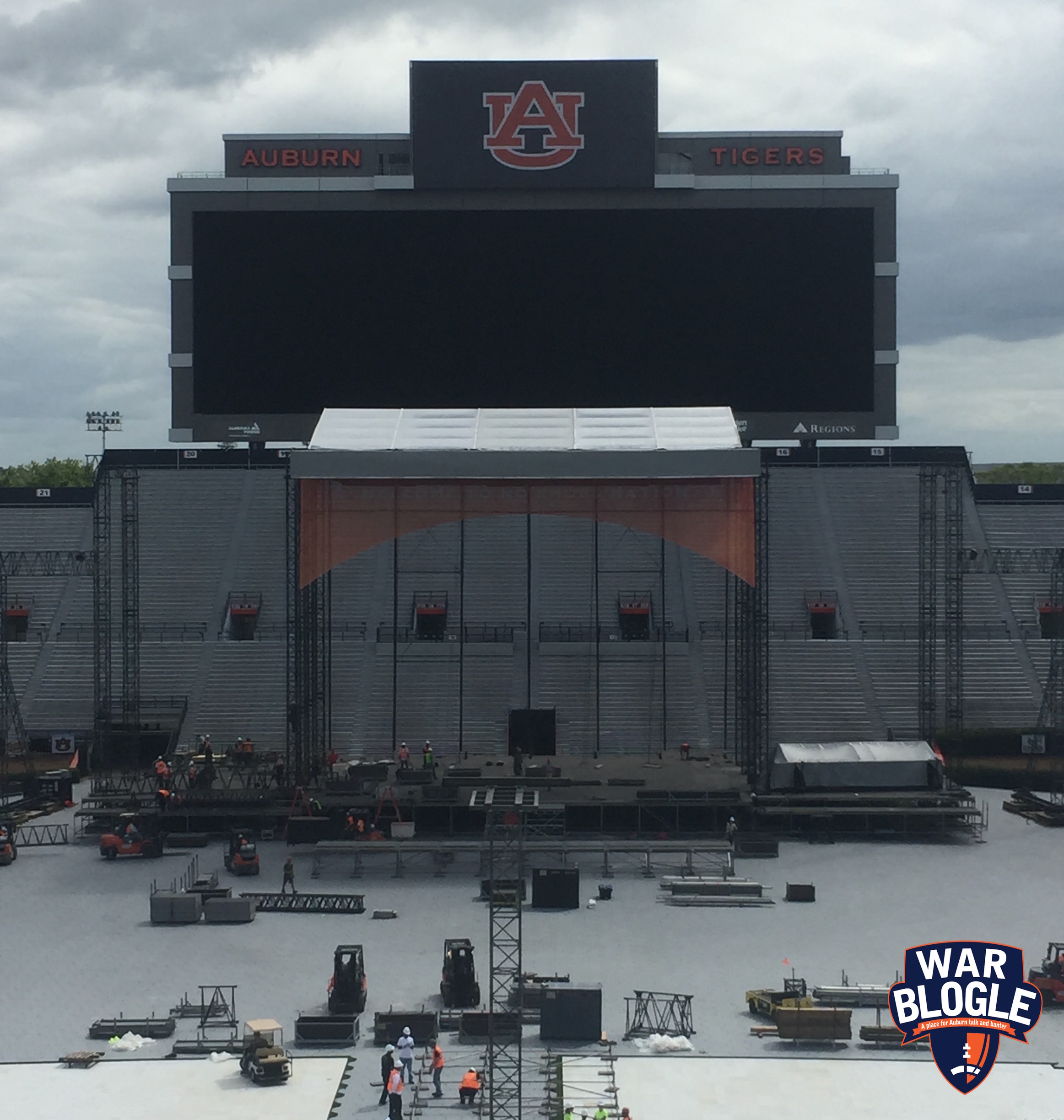 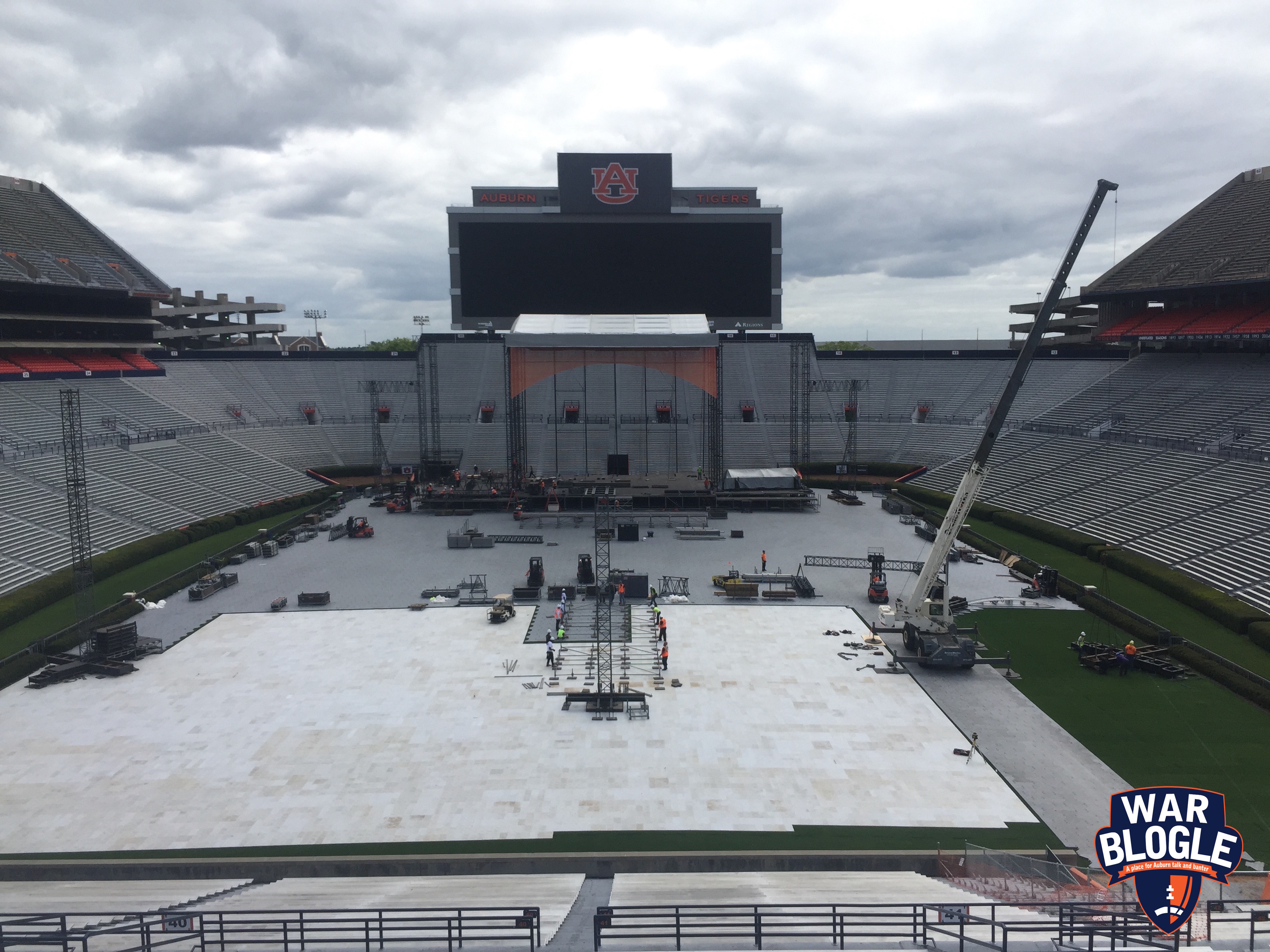 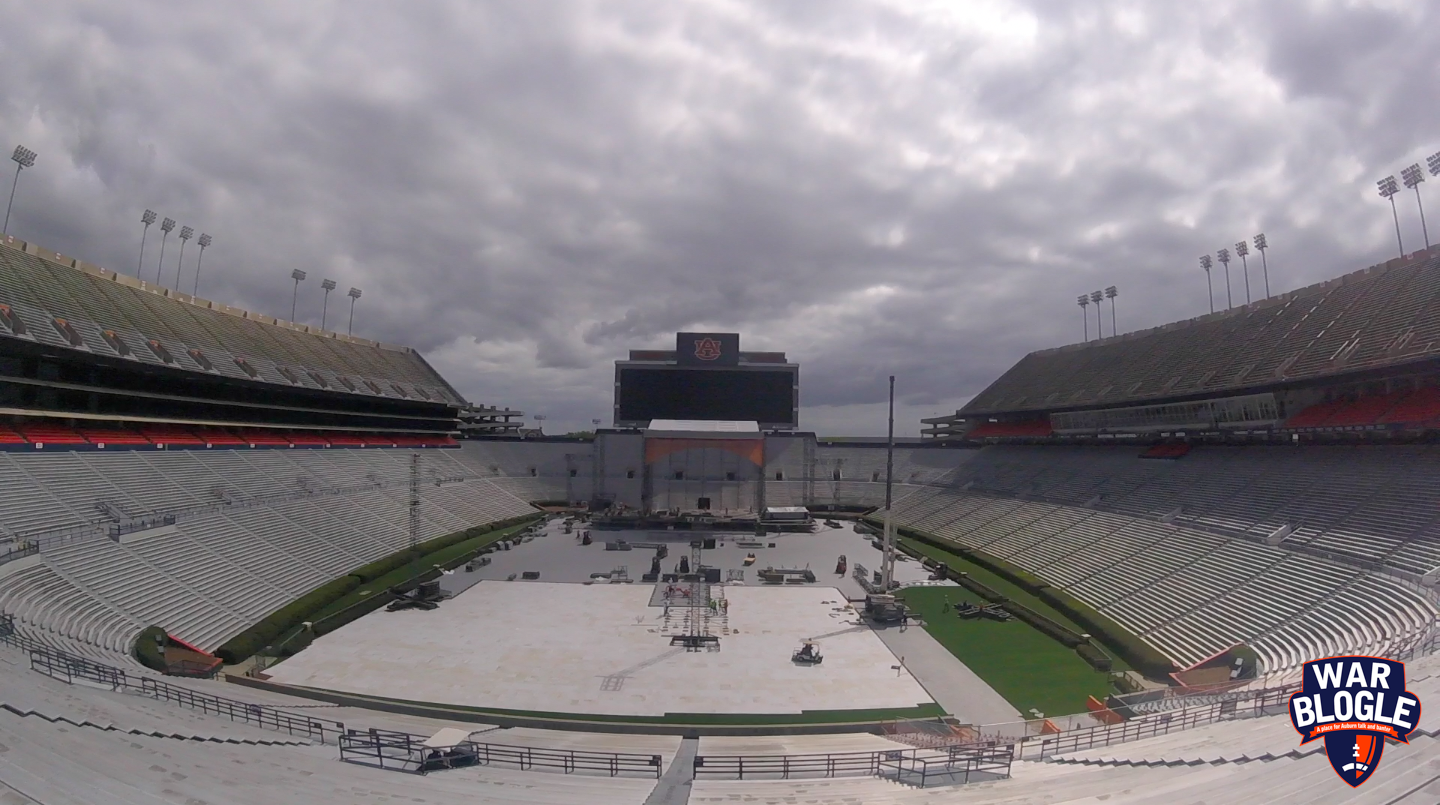 Update: the stage is set…

…and Kenny is now officially at the University of Auburn.

Update #2: and now we have system tuning thanks to @jeremyleff:

Demond Washington Returning Kicks for TDs in the CFL