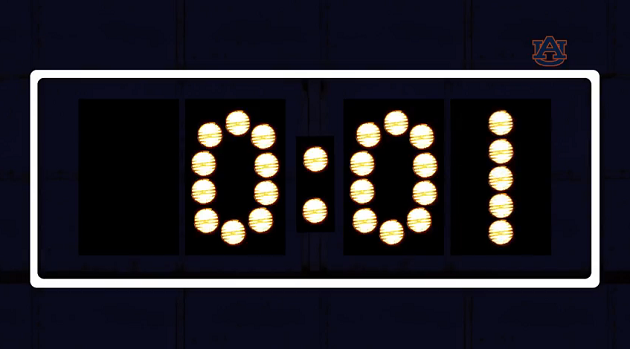 Gone are the days of AUHD, which apparently means gone are the days of the traditional “tunnel video” that usually contained chart-topping, heart-pumping, chillbump-inducing hits such as “All I Do is Win” and “Light ’em Up” or whatever it’s called.

The new video production group is called WarEagle Productions and was created to coincide with the SEC Network. So yeah, the videos this year are a tad different, at least what used to be called the “tunnel video” is. This year’s version is ripe with an orchestral arrangement played alongside plenty of nice plays from the previous season. I need a song, honestly.

The “inspiration video” has stayed true to form with its heavy emphasis on the bigger plays in Auburn history set to orchestral music as usual. Watching the beginning of it (the clock countdown to 0:01) in the stadium was pretty awesome. But it also led me to wonder how deep into the 2014 season are we still going to be harping on one second. Yes, it’s a play that will live forever, but do we really want to be all about the Kick Six a few minutes before we play South Carolina in October?

Finally, the band video was made by one of the guys who used to make the original videos with AUHD and it’s awesome as always.

So, what do you think about this year’s crop? It’s tough to top last year’s and 2010’s set, but as I’ve stated before, we seem to like the video more when it’s tied to a winning season.

….”But it also led me to wonder how deep into the 2014 season are we still going to be harping on one second. Yes, it’s a play that will live forever, but do we really want to be all about the Kick Six a few minutes before we play South Carolina in October?”

How deep into 2014? You mean how deep into this century? I will be all about the Kick Six until they lay me in the ground & just before, I’m going to ask for a tombstone that reads that “I Just Need One More Second”.

I thought the exact same thing. It was the first time that I’d thought ‘alright, enough with the :01 business. Having said that Barry’s comment is awesome. : )

I need a song too. I didn’t like this years tunnel vid at all.

These videos are just really, really bad. I could get behind not having a hit song if there music used had been composed by someone with at least a modicum of talent. This feels like music taken from a generic music library labeled “Inpsiration_1.mp3”. The editing is lackluster, and the overall product is the worst of these videos, and that includes the ones from the early days that were probably made by freshmen as part of their Intro to Video Editing class.

I wish there was a way to get these changed, but I doubt any amount of complaining by folks like me will to any good.

I’m all about how we can #BringBackAUHD. :-)

Very dissatisfied with the vids. Half of the fun is our yearly AU song. Can’t get hyped with instrumentals.

“But it also led me to wonder how deep into the 2014 season are we still going to be harping on one second. Yes, it’s a play that will live forever, but do we really want to be all about the Kick Six a few minutes before we play South Carolina in October?”

1. The new videos are OK but not nearly as good as the AUHD ones.
2. Really miss the single song. I’ll always remember how the crowd went nuts when the music
was changed to All I Do Is Win at the Georgia game last year.
3. I dearly love the Kick Six as well but don’t want it overdone. That game – and all of last
season – is more than one play.
4. Band video is awesome as usual. BTW, they reference the Kick Six but don’t make it the
centerpiece. Extremely well done.

Agreed – we need a song. The music is a huge part of the experience, and orchestral music doesn’t really get a stadium pumped up. Other than that, I think the videos are fine. I also agree somewhat about the Kick Six. I mean, I still get chills watching it, and it is undoubtedly one of the best moments we will ever experience as Auburn fans, but I don’t want us to get stuck in the past. It should definitely always be included in videos with highlights from past seasons, but let’s not make everything focus on that play.

So So Awesome. We just have to lay an azz whippin on the leghumpers. I hate them so bad.