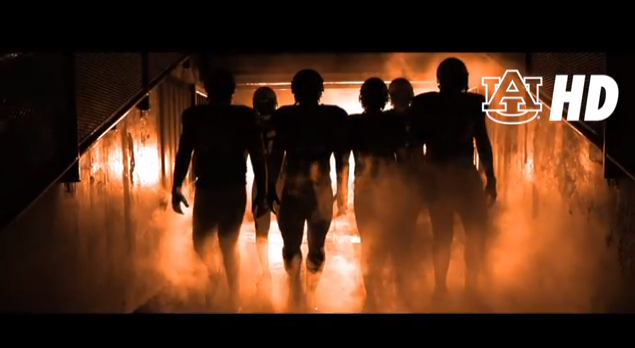 The AUHD intro videos have become a thing with the Auburn family. They matter. Everything about them matters. People believe it corresponds with how the season will go. If the video – and more importantly the song – isn’t a crowd-pleaser, people believe it won’t be a good year.

The consensus favorite of all time is the 2010 tunnel video, which featured “All I Do is Win,” and wouldn’t you know it, all that team did was win. The last two tunnel videos left something to be desired, and so did the football teams. See how this works? Now it could be said that people like the videos more when the football team is good, and that’s what’s really happening here, but that’s too logical.

This year’s “tunnel video” (played while the team is in the tunnel), is played to “My Songs Know What You Did in the Dark” by Fall Out Boy. Some of you may see that and roll your eyes, but it fits. It just does. The chorus is great for a highlight video. “Light ’em up, up, up.” Wait, is this a song about Spice?

It also features lots of Gus and not one highlight from the last two seasons. The 2013 Tunnel video:

Just before kickoff, the “inspiration video” is played. As always, it features old highlights and classical music. It does a fine job, but the beginning is a tad similar to this, no? The 2013 Inspiration video:

The band video should be out later today, and I’ll put it here once it is.

Cam Moves to the Elite 8 in the Madden Cover Bracket

I love them both. I have to rely on my wife for backup, but I correctly predicted the song used for the tunnel video.

What is the name of the rap song that was played in the fourth quarter of the Ole Miss game? I also heard it at the Arkansas State game ,

what is the name of the song used in this year’s inspiration video?