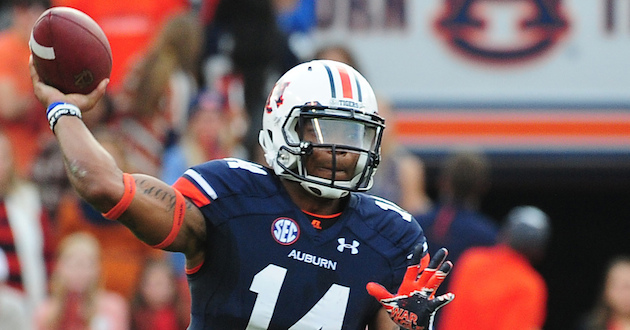 Auburn Football returns in 8 days, so it’s about that time for your favorite post of the year. It’s time for those quick-witted one sentence predictions that have shown so true since 2010. 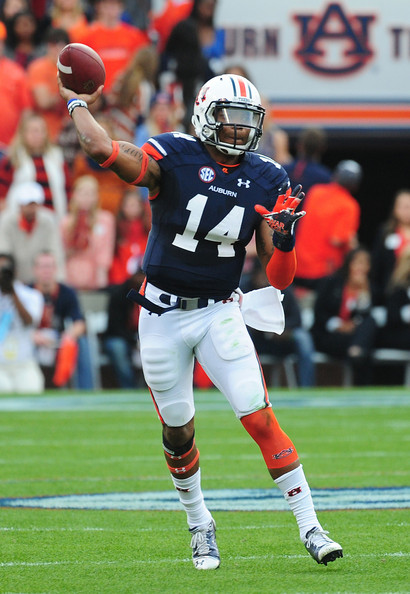 This year, you may think I’m going homer, but thanks to Gus Malzahn, it all makes sense.

Aug. 30 – Arkansas – The peskiness of the Razorbacks will be a factor for a quarter, but first game jitters will wear off by the time Nick Marshall’s short suspension is over.
Worry level: 5. Score: Auburn 38, Arkansas 14.

Sept. 6 – San Jose State – Auburn will lead by 31 at the half, which will give Jeremy Johnson major playing time and an opportunity to begin the 2015 Heisman campaign.
Worry level: 2. Score: Auburn 51, San Jose State 13.

Sept. 18 – at Kansas State – The hyped-up, Thursday-night crowd will give the Wildcats an early 14-point lead, but a slow steady comeback will turn into a 14 point victory for Auburn.
Worry level: 7. Score: Auburn 34, Kansas State 20.

Oct. 4 – LSU – The most sure SEC win of Gus Malzahn’s Auburn career will be a fun and long overdue beatdown of the Tigers from Red Stick.
Worry level: 6. Score: Auburn 38, LSU 14.

Oct. 11 – at Mississippi State – The biggest game in Mississippi State history will give the home crowd a little excitement for a quarter, but have them sent off to pasture as the Bulldogs SEC West title hopes and Dak Prescott’s Heisman chances are… sorry I couldn’t even finish.
Worry level: 4. Score: Auburn 34, Mississippi State 17.

Oct. 25 – South Carolina – A tough game in Jordan-Hare will be preceded with a bye week, giving the Tigers the rest they’ll need to down the Gamecocks for the 8th straight time since 1933.
Worry level: 8. Score: Auburn 31, South Carolina 24.

Nov. 1 – at Ole Miss – The battle of the HUNH offenses will prove again that Ole Miss is not Auburn and Hugh Freeze is not Gus Malzahn.
Worry level: 5. Score: Auburn 41, Ole Miss 21.

Nov. 8 – Texas A&M – The departure of Johnny Manziel coupled with pre-existing bad defense will put this new rivalry where it should have been all along.
Worry level: 4. Score: Auburn 38, Texas A&M 14.

Nov. 15 – at Georgia – Auburn’s return to Athens will the best since 2005, as the Bulldogs will be on their 3rd string everything due to injuries and arrests.
Worry level: 7. Score: Auburn 35, Georgia 20

Nov. 29 – at Alabama – Alabama fans will be expecting revenge from a game their team would’ve lost whether Chris Davis returned the Kick 6 to the house or not.
Worry level: 10. Score: N/A.

So yeah, as I said on this year’s “That’s a Dubya” episode of the al.com Auburn football podcast, I’m picking an undefeated regular season for Auburn. Why? Because there isn’t a single game on Auburn’s schedule that they couldn’t win. That’s not homer. That’s logic. And I thank Gus Malzahn for making it logic.

Now give you me your predictions and/or tell me how smart I am in the comments section. 8 days.

Completely agree with you that LSU will be a deserved beatdown that’s been two years in the making, but Georgia?

Georgia is never easy, even when it should be (see: last year’s almost collapse). Just can’t see Georgia ever going down the way they should.

Though I have a strange feeling the Alabama game could get out of hand in the good guys favor late in the 2nd quarter.

It also took us half way through the season to really get cranked up on offense last year. With the improved passing game leading to more quick strikes this season, I agree with Will about averaging more points in ’14.

Most prolific Auburn offense ever in terms of yards and points.

I am not as confident as you, our secondary still needs some major improvement. I have us going 10-2.

This is an incredibly tough season. It’s going to wear on us. Given that, 10-2 is as far as my homerism can take me. Could we go undefeated? Sure. We have to stay healthy and injury free especially on defense. We don’t have Carl Lawson and Tre Mason was special in how he could move the pile. The CAP and Corey Show will be great to watch.