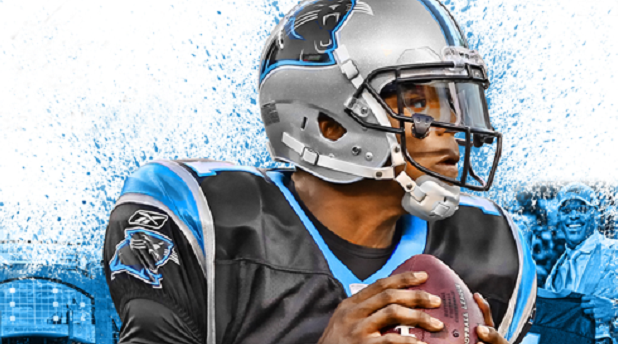 Update #3: Cam Newton has moved on to the finals of the Madden Cover Bracket. As expected, he will take on media-darling Richard Sherman. You’ll remember Sherman from his tirade following a playoff win over the 49ers last season. He was first bashed on Twitter, but was later praised by the anti-establishment bandwagoners. He will have the media vote, and he will have the “I don’t know anything about the NFL, but I do remember that guy’s name” vote, so you need to vote for Cam now and every day until the winner is announced on June 6th. Vote.

Update #2: With a 58%-42% vote, Cam has beaten Jamaal Charles in Round 2. That’s a lot closer than it should have been, which means that you’ll definitely need to get on this voting tip if you want him to beat Andrew Luck in the final four. Do it.

Update: Cam, of course, made it to the 2nd round with an 80%-20% win over Antonio Brown. Now he’s up against Jamaal Charles. Voting ends this Thursday morning, so get on it. A win would put him in the final four.

For the 3rd straight season, Cam Newton is up for the upcoming Madden Cover. For the 2nd straight season, he is a #1 seed in ESPN’s Madden Cover Bracket. Last season you’ll remember that the Blessed Individual made it all the way to the finals before every SEC fan outside of Auburn voted Calvin Johnson on the cover.

This year they’ve cut the bracket in half so there’s less obscurity and less time to determine the winner. It also means Cam is one of only two #1 seeds. That would, like, make him the best, right?

Anyway, voting for the 1st round ends tomorrow. He is taking on Antonio Brown of the Steelers. Given that I had to Google his name, I think it means Cam has this round locked up, but vote just to be sure.

There will be a new round of voting every week until the winner is announced on June 6th, when it will most likely come down to Cam and Richard Sherman, who will have the media’s faux-rage vote. But we’ll worry about that when we get there. Vote now.