It wasn’t easy, but Cam has moved onto the final round of the 2013 Madden Cover Bracket. In his closest win of the first four rounds, he took out Patrick Willis with 53% of the vote last week. His next opponent, former Georgia Tech and current Detroit Lions wide receiver, Calvin Johnson, beat out Aaron Rodgers.

If you’re all about this Madden Curse and don’t want Cam to win, get off it. He’s not even worried. Why should be be? Tell me one thing or person he hasn’t beaten in the last 2.5 years. Say he can’t beat it. He’ll just prove you wrong. 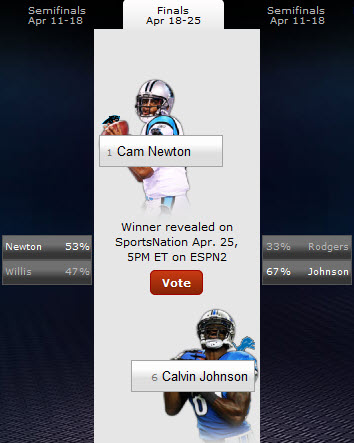 Given the beatdown that Johnson just put on who I thought was the only person that could beat Cam, and the fact that you know every one of the Crimson Nation is going to be voting against Cam for hours on end, you need to vote and vote often. Voting lasts until next Wednesday, April 25. Vote. Do it. Vote now. Vote multiple times every day.

I’m more worried the Tech fans will cheat… Again… Like they did for the Capitol One Mascot Challenge……… COME ON, COMPUTER ENGINEERS… MAKE CAM WIN!!! WDE!!!