Prior to last season, Auburn fans were given a small hint by EA Sports NCAA Football 12 of a very subtle uniform addition. I speak of the small “War Eagle” on the back of the pants, across the belt. Coupled with a previous statement by uniform fiend Uni Watch, it was all but certain that this change would come to fruition when the season started. As we all know now, it did.

Earlier today, the guys over at The Gaming Tailgate posted a few pictures that were released by EA Sports to show off a little bit of the game play in NCAA Football 13. Being one of the greater teams in the history of college football, Auburn had a few shown (Georgia and Alabama were only included as part of the Auburn pictures).

In the picture below, you will plainly see that as Nosa Eguae (or DE #94 as EA Sports calls him) prepares to put a tear in Aaron Murray’s eye, there is no name on the back of his jersey. No big deal. They probably just left it off because it’s just a preview picture, right? Maybe not… 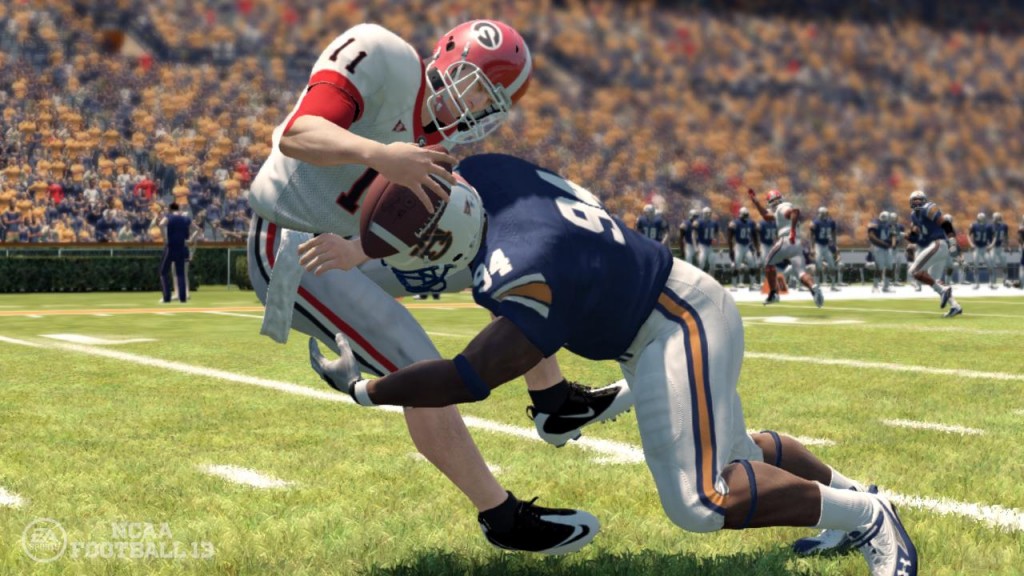 In the pictures of other teams, there are last names (or their position and number) on their jerseys as there always has been. That’s not all, either. Notre Dame, being the traditional institution that it is, has never had names on the backs of their jerseys. Do they have names in their preview pictures? No, they do no

Wouldn’t it be just like Chizik to do something like this? Some argue that last names on the jersey take away from the team aspect of the game. As they always say, the name on the front matters way more than the one on the back. I can definitely see Chizik making a statement by ripping off those names and showing the team that his team will always be run that way. Not to mention, he always focuses on “the AU” and the legacy at Auburn over the individual players in most of his team speeches.

Now if this turns out to be nothing and is just an oversight by a programmer, oh well, it was fun. But before you just laugh it off and say this is nothing, remember how stupid “War Eagle across the butt” sounded last year, and it ended up being real and EA Sports ended up being right.

On a completely different and disappointing note, it does appear in the other pictures that were released, that the smaller numbers remain, which could mean that the almost illegible tiny last names could remain (if there are last names), too. In that case, I could argue that no names are the same as tiny names, so we might as well just not have any. 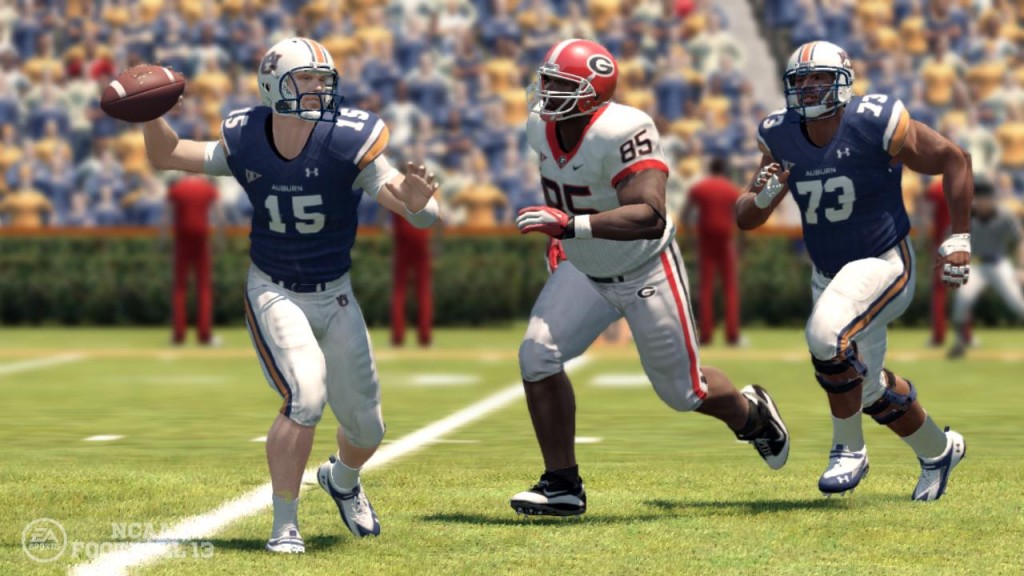 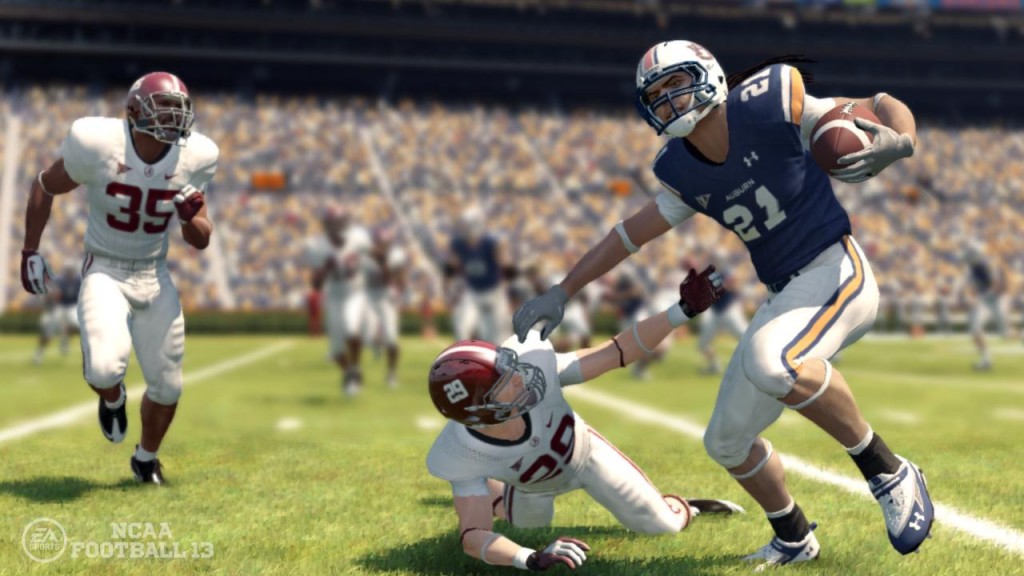 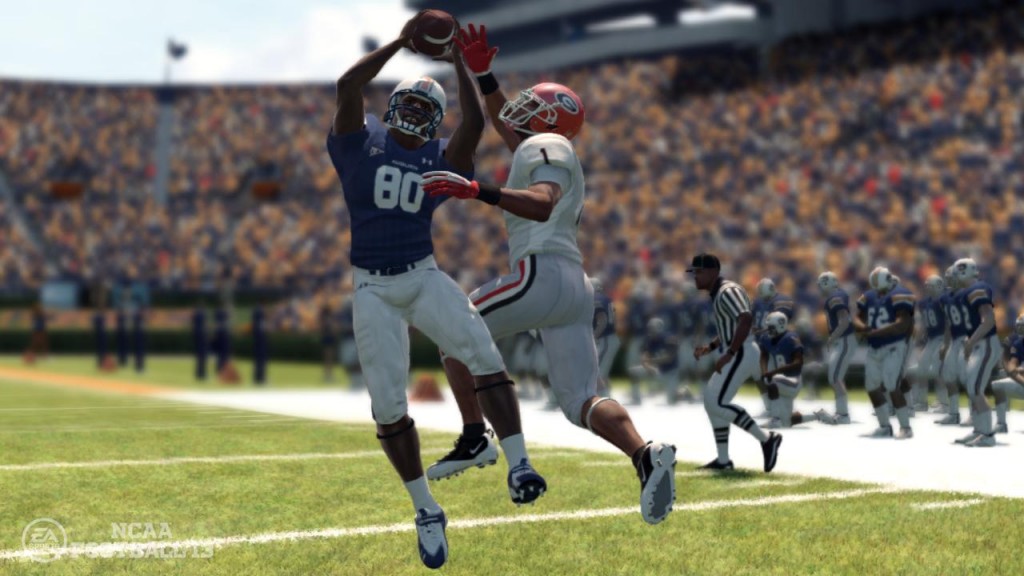 Update: more pictures have been released, with Auburn in their away jerseys, and there are still no last names, but The Gaming Tailgate says that may not matter. Plus, there are other teams that normally have last names that do not in these preview pictures. Much ado about nothing, or huge national cover up? You make the call. 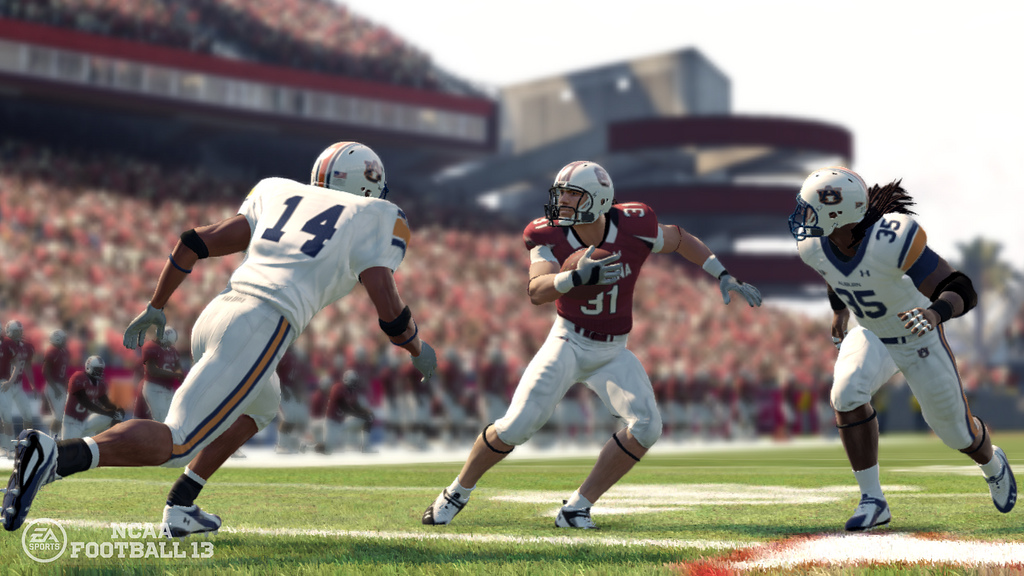 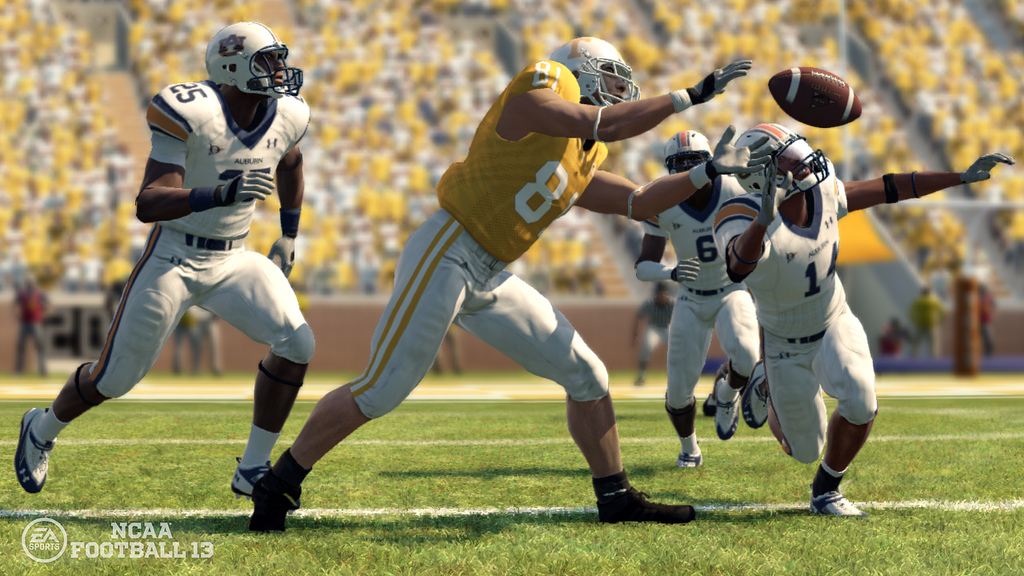 You’ll also notice that EA Sports doesn’t have the cut off pant stripes, but they didn’t last year either, even when they got pretty much everything else right (besides the fact that the orange stripe has always been too skinny).

The 2014 Schedule: One Sentence Predictions

No names would be better than the stupid tiny names. However, I prefer names (the old larger ones)

Meh, wouldn’t read much into it. After all, EA already didn’t get the memo that the SEC teams are all supposed to be using the new conference patch on the jerseys (the circular “SEC” is replacing the NCAA/SEC pennant) which was unveiled as far back as Missouri joining the conference.

Although they were correct about the “WAR EAGLE” tramp stamp on the pants last year, they also put out pics of Auburn in navy pants, which were not real. Maybe this isn’t correct.

Well I doubt Auburn will not have creamsicle orange on their uniforms like the pics above.
Fyi in the last photo none of the players on the sideline are watching the action on the field

Those tiny numbers HAVE to go, though.

On a completely different note: I’m sick of the washed out colors in the NCAA games.

Also, does that second photo mean that Kiehl will be injured in or prior to the UGA game?

According to the player ratings that I posted last week, EA Sports believes Moseley will be the starter (he won’t), or at least he’s rated higher than Frazier.

It’d be cool to remove the names on the jerseys… It would be just like in the early 80’s when Coach Dye showed up and made it not about the players, but about the team. Reinforcing the fact that you can start as a freshman or a senior… That your name doesn’t matter… Like Blogle posted, its the name on the front of the jersey that matters; not the one on the back… WDE.

Georgia Fan – big names or no names. Live w/ 3 Auburn guys and it bothered us looking at those tiny names last year.

I wouldn’t put it past EA to just leave stuff out, heck they left USA entirely out of the game.

Could be an oversight; much like forgetting to add South Alabama to the game this year.

I think the whole leaving names off the back “because it’s about the team” is silly and overrated. Does it really matter to the players? I think it is more for the fans and media. I hope they don’t leave them off. War Eagle

Well, according to NCAA 13, Clint Moseley is starting and Tre Mason is white……………….. In other NCAA previews, teams which traditionally have names on the back of the jerseys do not. i.e. Washington and OK State. I’m just glad the pant stripe will be vertical again this year and not taper off.

Don’t be so sure about that last one…

The tapered off pant stripes were not a design thing. They were a stitching issue on the pants. UnderArmour went a different direction with their pant styling, and it was so much easier for them to just taper the stripe like they did.

god what are they doing to our uni’s? Under Armour has dumped on us and everything they make sucks. I actually wish we do away with names, but lets return to the 04 look.

take this look and slap a UA logo on it and call it a day:

I’m all for them coming back to Russell and supporting their VERY local economy… That, and I work for Russell and would TOTALLY use this to my advantage to hang with Chiz and Lutz… If I could.

I loved Russell and all, but UA has done more for the Auburn brand and more importantly, our uniforms across the board than Russell ever did. Yea, UA wants to change stuff, but atleast it isnt like Nike! And plus, if Russell tried to do this, than I’m pretty certain we’d all flip out more than just number, name, and stripe changes…

I wouldn’t read much into this. EA may have just decided to take names off unis for generic rosters where the player names are RB #23, WR #80, etc. If not, and EA knows something we don’t yet know, then cool beans…