Last week I showed you where EA Sports NCAA Football 13 had Auburn rated as a team in certain aspects of the game (offense, defense, etc.). A day or so later, I came across a video that someone who was at E3 made in what seems to be rogue fashion.

It’s basically nothing but this guy filming the screen as he goes through each team in the nation (actually stopping at Texas State), while scrolling through the rosters to show how NCAA Football 13 has each player rated – or I should say “likeness” of the players as former-Tiger Andrew McCain pointed out. I guess in the interest of time, he only shows about half of the rosters, but most of Auburn’s starters are there.

Just so you don’t have to wait through the other twenty-or-so teams above Auburn in the video, I went ahead and made screenshots displaying everyone on Auburn’s roster that made the video. How nice… 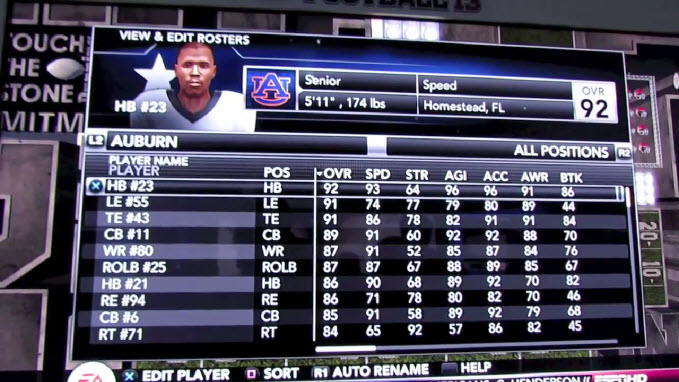 Onterrio McCalebb (#23) tops the list with his overall rating of 92. That makes sense to me. He’s the most proven high-profile player, and he’s been doing this for three years now. If I’m EA Sports, he’d be the person I pick to be on top. Next we have Lemonier (#55) and Lutzenkirchen (#43), who are arguable the two most complete players on both sides of the ball.

I’m not really surprised that Chris Davis (#11) is 4th on the list, but I am surprised that they knew to put him that high. He’s spent a lot of time out due to injury, but when he’s played, he’s been Auburn’s best CB in my opinion.

I have never seen Emory Blake (#80) lift weights, but I would be willing to bet that he’s stronger than McCalebb, who is 12 points higher in the strength rating. No offense to McCalebb, but I think we all know his strength is his speed. Emory, they tryin’ you brah. Prove them wrong. 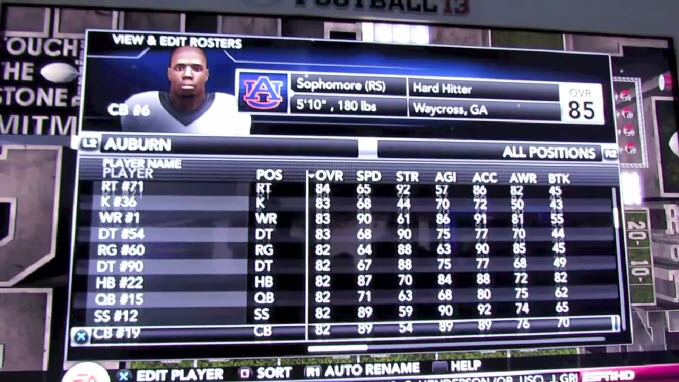 As we go down the list, Cody Parkey (#36) makes a “higher than you’d expect a kick to be here” appearance. This is where ratings get a little hairy. It’s very hard to put a quarterback and a kicker in the same group and compare them. I guess all this means is that Parkey is considered a very good kicker on a national scale.

Gabe Wright (#90) is rated much higher than I would expect EA Sports to rate him, but basically just because I don’t expect them to know much about him. We know he should be good, so the rating isn’t that inaccurate.

Our first quarterback on the list is Clint Moseley (#15) at the 17th overall spot. I’d be willing to bet that’s the lowest of any first-rated quarterback of any team in the nation. Do you know of any teams where the top quarterback is not even in the top 15 players on the team? This also likely means that EA Sports thinks that Moseley will start (since he’s the highest rated quarterback), but you can’t blame them. He ended the season starting, and Chizik and Co. and given zero information that would suggest that will change – although it likely will. 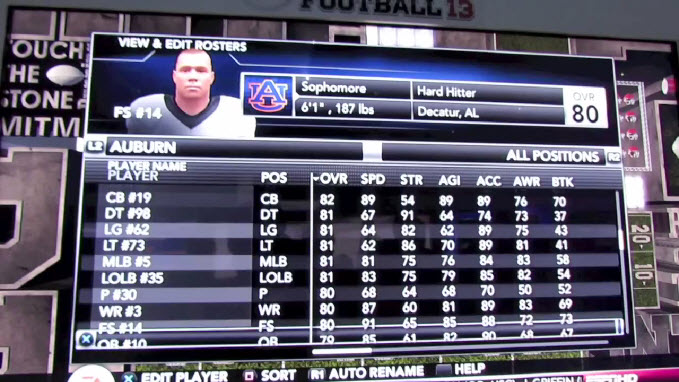 Nothing major in this section of the list, but we can see Kiehl Frazier (#10) trying to poke his head up there down at the bottom. Wait, DeAngelo Benton (#3) two spots above him? I’m sorry D-Lo, but based on what? 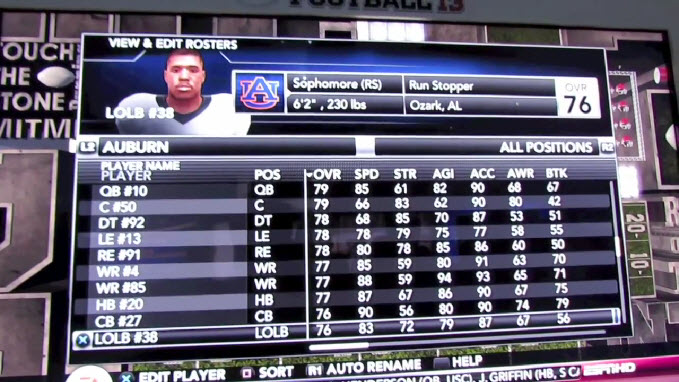 Closing out the list, Kiehl Frazier (everybody’s probable starting quarterback) finally makes an appearance at the 28th spot. A 79 overall rating isn’t terrible, but we all know he has the potential to be better than that. And who knows, in NCAA Football 14 he maybe given a 90. I certainly think he could. With an 85 speed rating, EA Sports has him near the top on the team in that aspect.

So yeah, like the team ratings, keep in mind that this is nothing more than a video game maker’s thoughts on a players’ abilities. I wouldn’t completely write them off, though, given the level of detail they go into with player appearance, etc. I would put the overall ranking ahead in accuracy over any of the other attributes, and in general, I don’t have many complaints.

What a joke. They clearly weren’t watching McCalebb’s tapes, or they would know he has to be at least 97 speed. (Remember that “speed” is essentially top speed, and when McCalebb is going all-out there are only a handful of people in the nation who would be able to catch him.) This really saddens me.

Looks like gamers who choose Auburn are in for another year of decent, albeit fairly SLOW players.

And this is why I play Dynasty mode where I can make recruits and then convince them to come to Auburn. You get to play head coach, and bring Cam Newton’s and Nick Fairley’s and Bo Jackson’s to campus every three years.

I download rosters as soon as they come out so I’m not too concerned where they place players. There are even people who update the rosters weekly based on updated information.