This summer, ESPN’s College Gameday will be shooting a commercial for the upcoming football season on one school’s campus. Which school? The school that receives the most votes. Given Auburn’s latest successes in contests relying on fan votes, it would be easy to sit this one out and assume it’s in the bag. Don’t do that. Vote for Auburn by going to GamedayVote.com or Gameday’s Facebook page.

Update: Voting has been suspended indefinitely due to “integrity issues.” Basically, Texas A&M, NC State, and Arkansas fans were cheating. Good for ESPN for stopping it early, unlike Capital One who didn’t do a thing about it.

Update #2: The voting is back up and everything has been set back to zero “in the spirit of fair play and good sportsmanship”. Take that Aggies and you other cheaters. So get over there and vote. Now.

Voting begins at 11 am CT today, which as of the time of this posting, is, like, right now. So go do it. You can vote once a day until May 2nd. That’s only 10 days. 10 votes. 10 tasks for you to complete to show your love for Auburn. Is that too much to ask?

Think of what this commercial will mean to Auburn, it’s history, it’s present, and it’s future. The benefits are unending. Plus, we can see how ESPN handles the whole “Aubie can’t remove his head because he’s a real Tiger” thing. Vote. 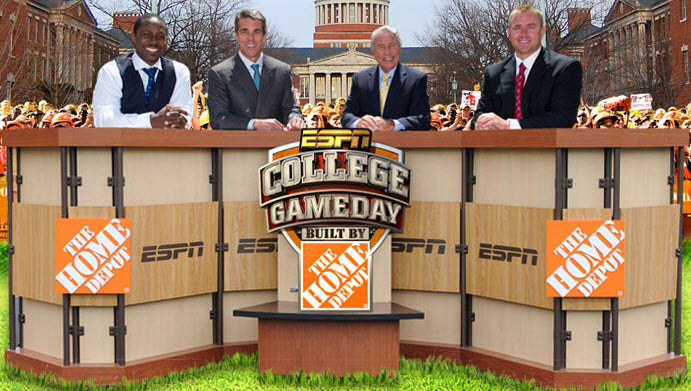 Looks like some schools are running voting scripts already…

Not that I would endorse this sort of thing, but it’s pretty simple to just put in any address then “@gmail” or whatever and it basically accepts it. You don’t have to go confirm your email or anything. I just used every email address I could ever think that I’ve had, including my old @auburn.edu email…

So… You know… Just throwing that out there… WDE

So, Auburn fans are one of the most honorable in that we are not using email bots/scripts to vote and are honestly voting one person at a time?

#1, they changed the front of the site so you can only vote using a FB account. But apparently they have not fixed the backend. The scripts that are being used to randomize email addresses are still working.

Auburn could do the same thing if we knew our school ID on that site, but I can’t find it. Probably since I voted already today.

haha All that work by the vote skewers goes to waste :D Sweet!

hehe funny fact.. Check out the name of the image for the voting site. :D

So basically “we effed up and let a bunch of people cheat, our bad…” ::sneer::

The voting restarts may 1 at Noon ET. Any guesses on how soon the cheating will begin again? My guess is < 3 hours.