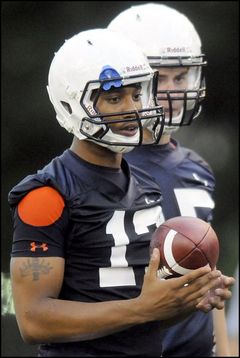 Tyrik Rollison, the once proclaimed future of Auburn football, posted these two statements his Facebook page this morning:

Tyrik Rollison IS MOVING ON FROM AUBURN…I APPRECIATE EVERYONE WHO IS SUPPORTING ME.

Update: Rollison has removed the posts from his Facebook page.

Take that for what it’s worth. It is just a Facebook status, but I’d say that’s pretty concrete, and that it doesn’t surprise me at all.

You’ll remember that Tyrik was suspended from the team just before the bowl game and didn’t make the trip. I’m sure Mr. Newton’s arrival on the plains may have something to do with this as well.

I’ll post more info as soon I hear anything else, but for now you can read the interview I did with Tyrik during football season.

FWIW – He has removed those messages from his FB page now.

DO NOT GET THE $5 BOX. IT IS BAD NEWS. Seriously, there might be some good to come out of this situation. If he leaves the coaches could use this to get Jeff Driskel. He could redshirt Newton’s last year and still have four years to start.