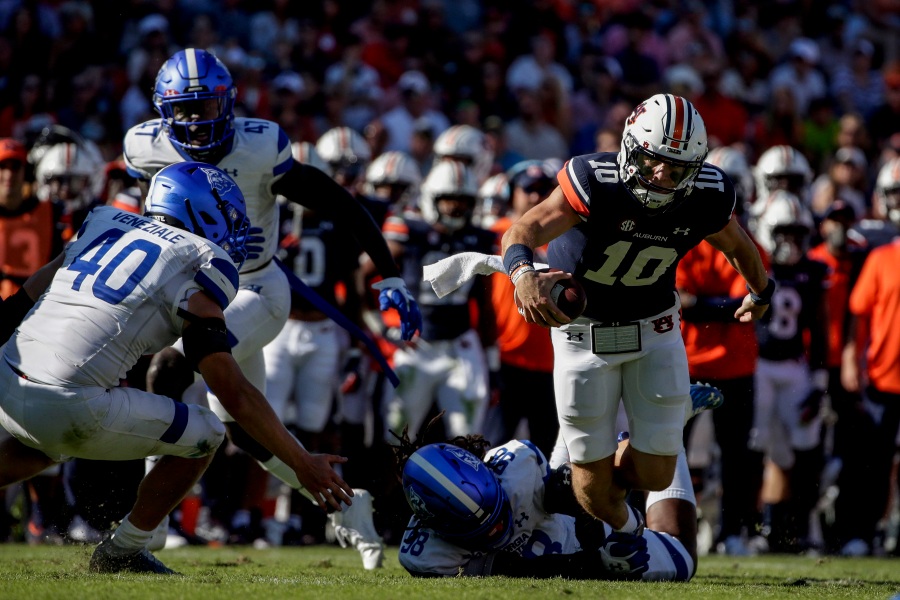 I thought I told everybody last week to calm down. A few weeks ago, I could have sworn I talked about the perception of Bo Nix and how most are wrong. Thanks to a Georgia State inevitable sleepwalk, things have only magnified. The absolute worst thing that could happen, indeed happened. 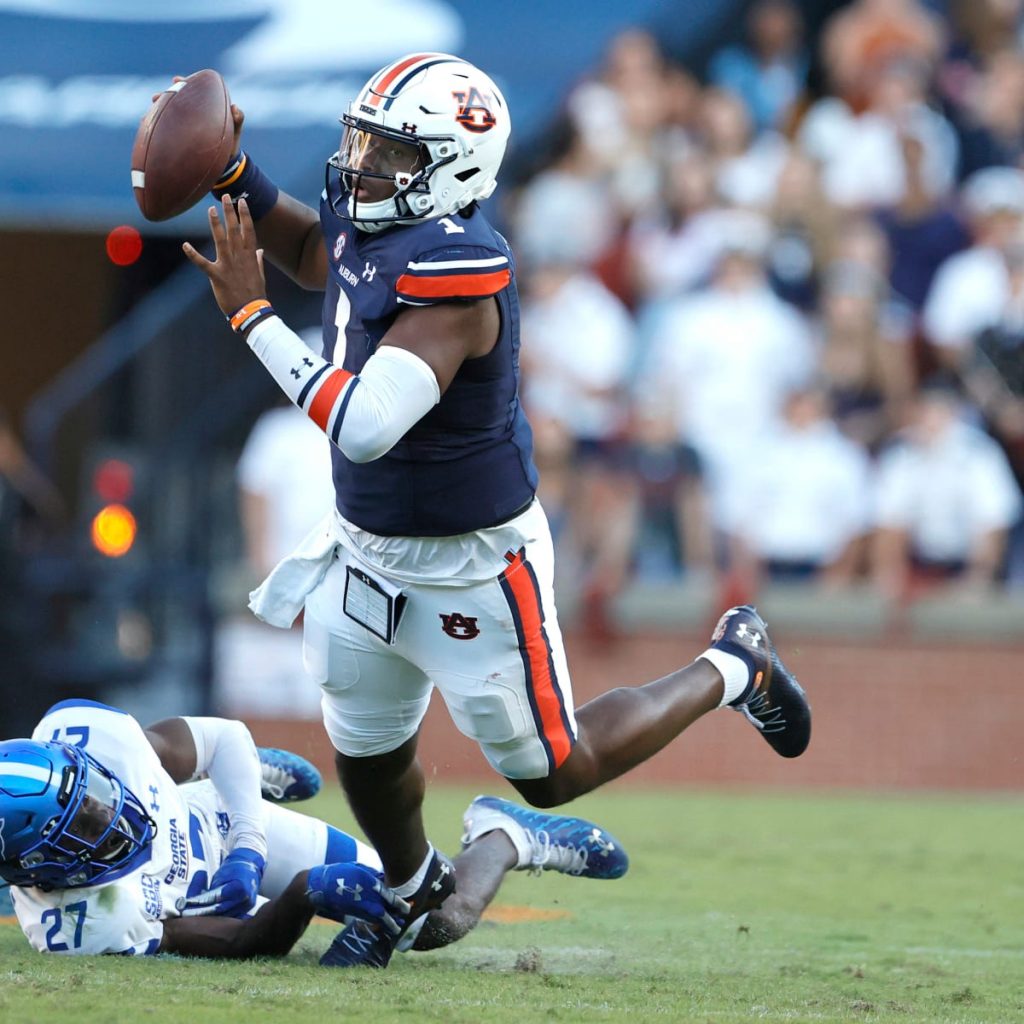 TJ Finley entered the game in the third quarter and ultimately lead Auburn down the field for a game winning touchdown drive late in the fourth. It was an amazing drive that nobody can deny or take away from him. I, for one,  am very proud and thankful for his efforts as we all should be. With that said, let’s think this through for a minute.

Saturday was nothing short of a nightmare. When you let teams like Georgia State hang around there’s a few things that can happen and none of them are good. These teams have talent and when you allow them to stay in the game their confidence only grows. Tucker Gregg, a white walk-on running back from Murray County High School ran for 150 yards on 12 carries and a score. Three carries that were absolute busts in the run fits where he wasn’t touched for the first thirty yards or so isn’t exactly ideal.

No Owen Pappoe or Zakoby McClain was a major issue in the first half. We all saw what the defense did in the second half though with only one of the two. If only Bo Nix had played better.

Auburn has the best running back duo in the country. Not many people will argue that. Tank Bigsby averaged a measly 3.3 yards per carry Saturday. Out of Tank’s 18 carries, his longest run of the day was 12 yards. Yes folks, Georgia State pushed our offensive line, and defensive line for that matter, around all afternoon. If that isn’t your biggest concern, I’m not sure what to tell you. But yeah, Bo Nix man….

I counted not 1, not 2, but 3 offensive snaps where Auburn only had 10 players in formation. I would assume the passing game coordinator that is responsible for personnel will be held accountable for that. Oh, that’s right. Wide Receivers coach Cornelius Williams is responsible for personnel substitutions. I heard he had a rough weekend, but that’s a story for another day.

Auburn recorded another 4 dropped passes, including a dropped touchdown that hit Ze’vian Capers in both hands. Auburn also had 6 penalties for a combined 65 yards which is just too many for a home game with no crowd noise. Good grief, Bo Nix. 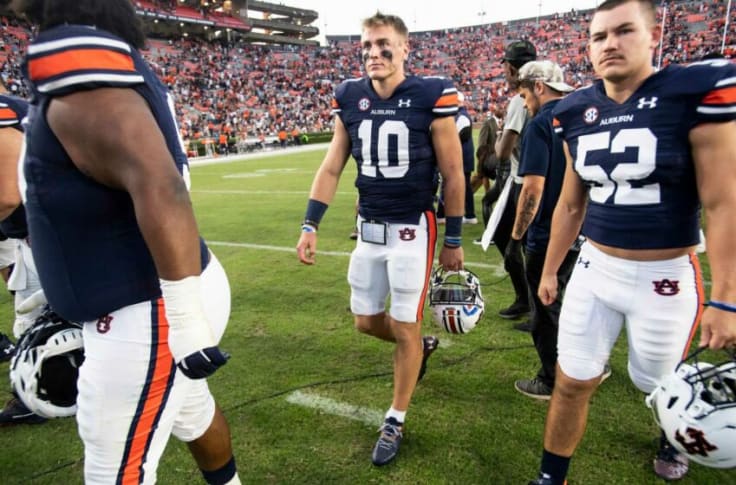 Now, does Bo Nix make every single throw? Absolutely not. It is frustrating when you’ve got guys streaking down the field with a step on the defender and not making that connection. The issue here is every player on the team underperformed Saturday. It’s only magnified because this fanbase still has pre-conceived Malzahn-era Bo Nix in the back of their heads.

The student section is literally chanting TJ’s name while the whole team is just going through the motions. I’m sure Bo’s confidence just skyrocketed after that. The team needed a spark. It wasn’t magic sauce or TJ Finley’s elite play. It was simply a momentum shift and a mental reset for a struggling football team.

I don’t think anybody can honestly say that Finley looked noticeably better than Nix once he came in. I continued to see drops and overthrows. The mentality that “well he came in cold, and this is Bo’s 3rd year he shouldn’t still be missing those throws” is tired.

If we are getting the exact same thing in a bigger, less mobile, less experienced version, why are we hollering for change? It needs to be obvious that he’s better. We should not be basing our opinion off of one successful drive against Georgia State. That doesn’t eliminate summer and fall camp folks. I’m sorry.

At the end of the day, you’re mad at the wrong things. Our defense has not lived up to what we know it can be yet. Our offensive line is as bad as we feared, and we are struggling to run the football with the two best backs in the country. We lead the SEC West in dropped catchable passes. We rank 11th in the SEC in penalties. I mean, where does it end? 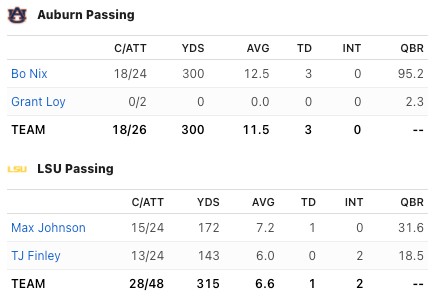 It’s LSU week. There is a lot of talk about who the guy needs to be. You’ve got a guy that transferred from LSU because he wasn’t good enough the be the starter. He’s had one successful drive in his time at Auburn. You want to start him against his former team?

In the other corner you’ve got a three year starter. A guy that has beaten Oregon, Alabama, Texas A&M, both Mississippi schools twice, Arkansas twice, and so on and so forth. Oh, and one of these quarterbacks beat the other by 37 points last season. I think you know the choice here.

You’re understandably mad, but you’re mad at the wrong things. It’s time to get on or get out.

From the Other Sideline – Georgia (Summer Edition)

Thanks for the commentary. Regrettably that TD drive by T.J was aided by what looked like a blown call by the refs….SEC refs of course. BUT a team like Ga State should just be happy to get their million bucks or whatever and not expect to get a fair break on a close call by the homer refs. We got one of those last year in the Arky game that some folks keep reminding us about….so hope they are as embarrassed about this “gift” that got AU over the hump against Ga State.

And why was it necessary to point out that it was a white running back from Ga State who ripped up the AU defense?

Well, the dropped pass was on 1st and 10. People seem to think without a shadow of a doubt Auburn wouldn’t have converted without that play. Seems unlikely to me.

Regarding the running back, they rotated more than one guy. Specifying which one isn’t something to have fake outrage about.

You specified which running back when you said his name. What does him being white have anything to do with anything?

Also, no one was “outraged,” just commenting on your choice to point out the fact he was white.

That struck me as odd as well.

I cannot Love this article enough!! I don’t know why I still go on the Auburn football sites and attempt to have reasonable debates with grossly uninformed and unreasonable people. There is so much I appreciate about social media but it has also become a poison to a team’s ability to function as intended. The stadium chants and fans booing our Auburn men is a thing I never thought I’d see. Good article and as accurate a perspective on the truth of the situation as I’ve yet read! Thanks, for whatever good it will do. War Eagle‼️

I think you hit the nail on the head. Not sure which QB is better but Nix would be my starter at LSU. I would give TJ a series or two in the 1st half and Bo would know that coming in. We need to be careful about anointing someone because of one drive. War Eagle

Beau. You are dumb. Really a moron. Who is letting you write this shit.

Would love to discuss it over a beer Matt. Unless of course you don’t want to be seen in public with a guy as dumb as me.

Lol if you don’t want TJ to be the starter just say that.
Y’all gone be mad if Harsin start Bo nix and we start getting beat then they have to make the switch again.

I do not give a dam about who starts at QB. IT IS LSU WEEK, people. My sons were 17 and 14 years old the last time Auburn won down there! They are grown now and I have 5 grandchildren. It is imperative that we get this win. THE DELAY IS OVER; THE TIME IS NOW, win it for tubbs, win it for pat, win it for us. More importantly; win it for yourselves.

I won’t argue about any of your viewpoints, as you are entitled to have them. But saying certain criticism of Bo is “tired” is simply a cop-out.. The reason you can say that is because it has been said so often over the last three seasons. You seem to think that makes it untrue, when the opposite is more likely true. If it has been said so often that it is “tired”there is very likely at least some truth in it.

This week has seen a certain segment of the Auburn Family (Id like to think the dysfunctional side), meltdown all over Twitter, various sports blogs, on Facebook (does anyone really still do Facebook?) and even in our Newspapers and Sports talk shows about who is going to start for Auburn in Red Stick. I mean it has been a rough week for Bo as he has been all but burned in effigy and our new coach has surely thought… “What the Hell?”. Be all that as it may, I think it is imperative to remember some salient points – 1. Its a game there will be more games to be played after this one 2. There is literally nothing riding on this game but some ill thought through wagers and some sort of prideful ego rides 3. Our coaching staff are in practice every day with these guys and they evaluate every aspect of the game and who will be best suited for BEGINNING the game. 4. If whoever starts does not do what needs to be done the coach has already shown he will substitute him rapidly.. 5. even if one is substituted that does not mean he is out for the game 6. If we substitute 12 QBs and WIN does it really matter?? The object is to WIN!!!! War Damn Eagle!! 1-0!!

It’s a heavy burden being right all the time. It’s my curse to bear.