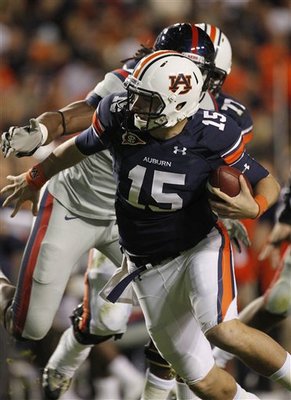 We learned today that Gene Chizik and offensive coordinator Scot Loeffler have chosen Clint Moseley to start tomorrow’s game against the Ole Miss Rebels. Since I’m not really in the business of badmouthing young men, I’ll just say that it definitely appears that the coaching staff is forgoing preparations for the future in exchange for a hopeful win right now. If that’s the case, you can’t argue too much with Frazier being benched, but I don’t think that should be the case. We should be preparing for the future.

If the decision was tough to make, why not go with the guy who appears to be the best option in the future? Anyway, I’ve said more about that situation than I wanted to. We have a game to talk about.

Clint Moseley was responsible for a big 41-23 win over the Rebels last season, when he threw for 4 touchdowns and no interceptions. However, Auburn now runs an offense that has not proven that it can or wants to score. Not to mention, Ole Miss is lots better than the terrible team that they were a year ago. So to say that last year will look anything like it did last year is a pretty big stretch.

The Rebels dropped a heartbreaker (due to coaching stupidity) last week against Texas A&M. They gave up 10 points in the final 6 minutes. While it likely had the team down for a day or two, all it did for me was prove that they could hang with and should have beaten the same Aggie team that scored 50+ points on the Arkansas Razorbacks. You may remember that Auburn scored 7 on those same Razorbacks a week ago.

This Ole Miss offense is very much like the Clemson, Louisiana-Monroe, Gus Malzahn offense that we’ve seen too much already this season. The Auburn defense has proven over the last few weeks since Mississippi State that they can hold a typical, pro-style offense just fine (until they tire out from no offensive support). It’s the quick, spread-style offenses that has given them trouble.

You all know this, but what that style of offense does is level the playing field. It takes talent out of it. That’s how teams like Lousiana-Monroe can beat Arkansas and almost beat Auburn. That’s how Ole Miss was able to move the ball on Alabama’s best defense in the history of mankind and alien lifeforms from all dimensions of the universe.

They aren’t better teams, not by a long shot. They just have an effective offense and they run it well. Football is a team sport, and if the team is running an effective system effectively, they can be very effective. Got it?

Putting Moseley at the starting spot tells me one thing about Auburn’s strategy tomorrow. They are going to run the ball. And they should. Right now, it appears to be Auburn’s strength when the right guys are being directed into the right gaps. 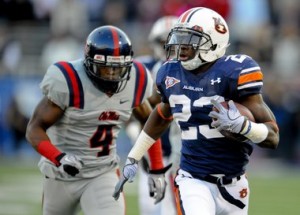 For instance, when Onterio McCalebb is called for a run up the middle, that is not good. It won’t work. He should run sweeps around the outside and catch passes out of the backfield. Tre Mason and Mike Blakely have proven to be the two guys to run up the middle, and if need be, take it outside. Anything else should not be called, unless it’s a very tricky draw to McCalebb when the middle is wide open.

It’s actually very simple, but short gains in the run game due to wrong personnel/running lane calls is what has put Auburn in 3rd-and-long and forced the quarterbacks to make a play with the blitz coming. You wanna know the issue with Auburn’s offense? That’s it. It’s not who’s been playing quarterback. It’s the situations the quarterbacks have been put in by questionable play-calling.

So tomorrow we’ll likely see a lot of handing the ball off until a pass play is absolutely needed. And I’m fine with that. I still don’t understand pulling the plug on the future, but Chizik may not have a future. He’s looking for a win right now.

This is probably the most negative preview I’ve ever written, but times are tough right now. The decision today hasn’t helped. Either way, I don’t pick Auburn to lose.

Auburn will run, run, run, run, and run, and score more points than they have all season. Moseley will have a decent day with short passes. Jonathan Wallace will come in and run a little Wildcat to spice things up. The defense will struggle in the first quarter, but hold it down after making adjustments.

Auburn has only lost twice in 14 meetings in Oxford. I don’t care how the season has gone. I don’t care where we’ve been. We are Auburn. They are Ole Miss. Auburn wins.

T-Will Addresses the Negativity in “Tomorrow”

Great preview. I totally agree with you on the QB situation. We need to look toward the future. I think we could win 5 more games with Frazier at QB. He’s been making much better decisions now. He’s not there yet but if we would start him the rest of the season he would get to the point where he is setting his feet correctly, getting rid of the ball when he’s being pressured or scramble for that matter if nobody is open. My point is though,sadly, though is that we need to look at winning the SEC next year and play who will play next year. I don’t believe that will be Moseley.

Exactly how I feel!

I said the same thing before last season. We should have started Kiehl then, which everybody knew was a rebuilding year; then by now he would have the confidence he needs to play in the SEC. That’s what the issue appears to be to me, he is shaky when it comes to confidence so it forces him to hold onto the ball too long, too often. I hope that his confidence does not take a worse hit now the he is benched. Keep your head up Kiehl, we believe in you!

War Eagle. I always loved a power running game and stout defense. That’s how Cadillac and Bo did it. That’s how Auburn Wins!!!

Tough one today as this season just keeps feeling more and more like 2008. I don’t think we win a SEC game this year and hopefully beat Ala A&M and New Mexico St to finish 3-9. Not being negative or pessimistic just my opinion. I think Chiz gets a mulligan this year, fires Loeffler and is on a very hot seat in 2013.