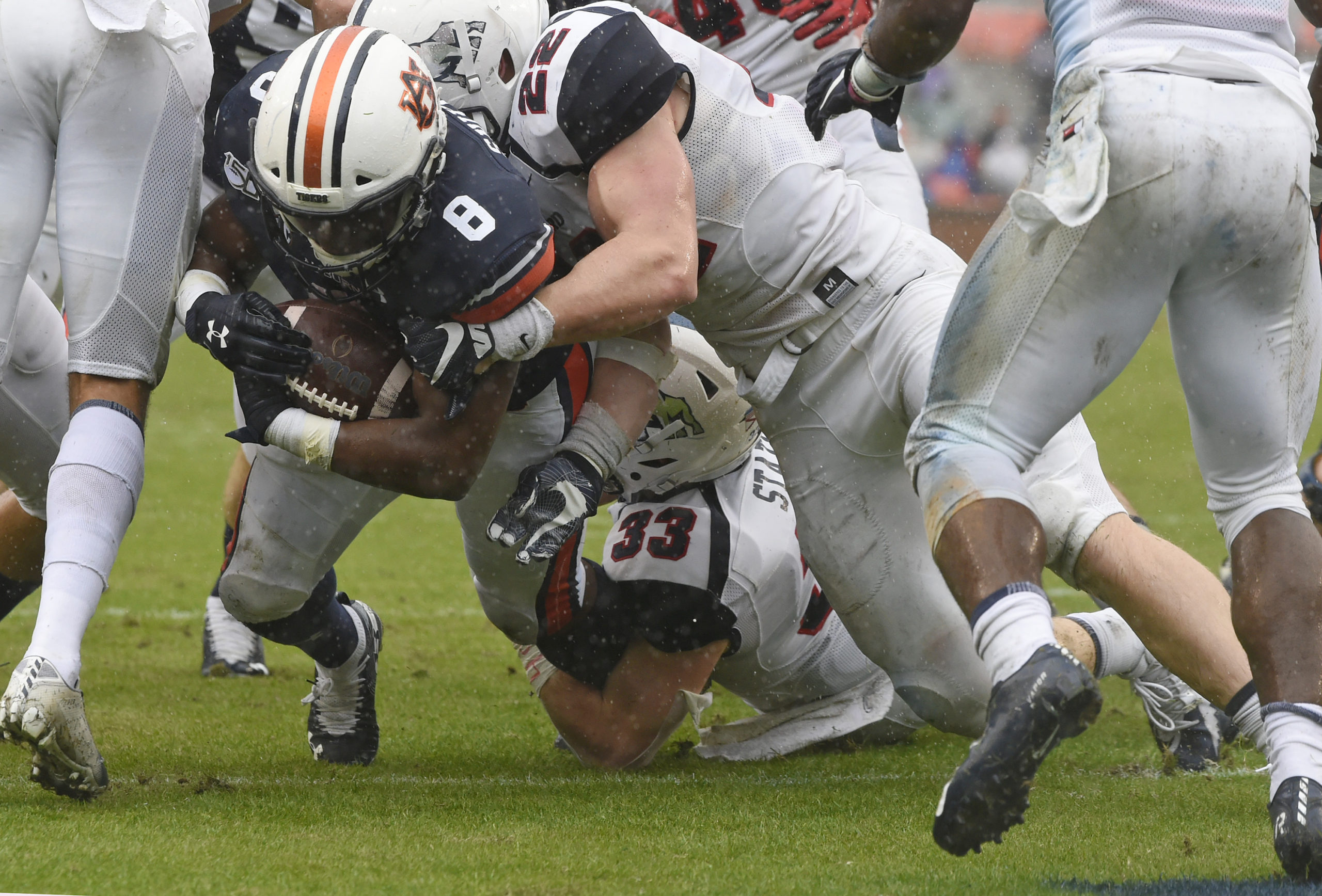 It doesn’t rain often at Jordan-Hare Stadium. West Virginia in 2009 is on top of everybody’s list. Southern Miss last season was pretty bad. But on Saturday around 11:15 am, it was raining, man. And it wasn’t a fun rain. It wasn’t a late afternoon, most people have been drinking all day, it’s not that cold, and here comes a good game, rain. It was an 11am in November, the sun isn’t out, most of us are barely awake, and Auburn’s backups could win this game, rain.

Therefore, the stadium was barely half full at kickoff, and it was less than a quarter full at the start of the 2nd half. I joked on Twitter that I could count everybody in the stadium right after halftime, but I honestly probably could. By the time the 4th quarter hit, I could almost count them on one hand. 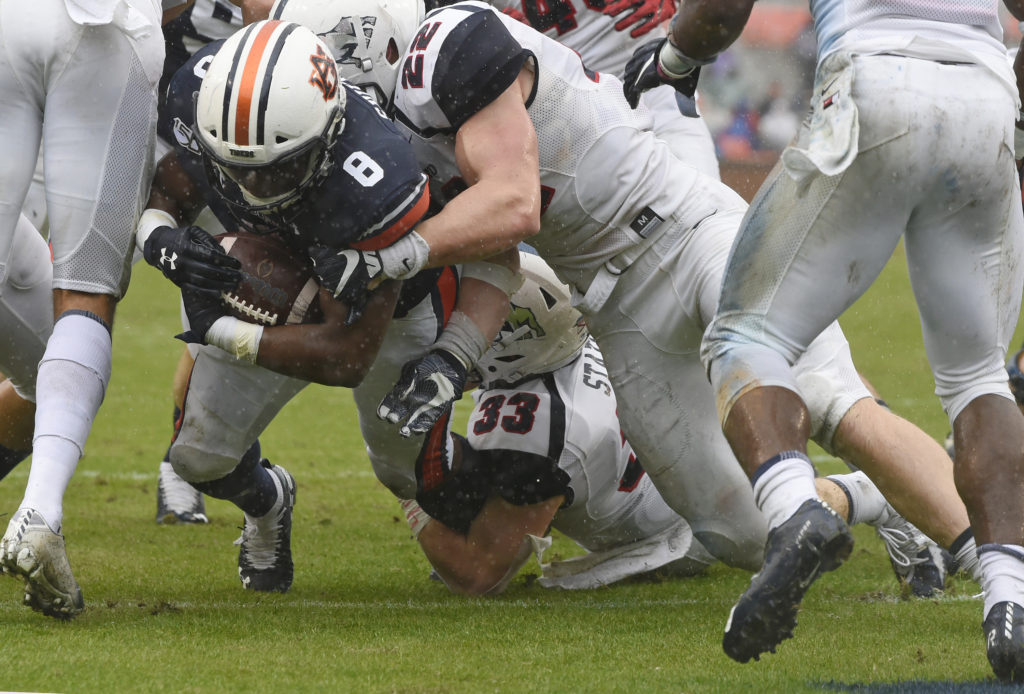 But on the field, Auburn did what they needed to do. The first little bit wasn’t that fun because the aforementioned rain and wind started whipping up and I think the defense really wanted to show Samford that they were going to eat their lunch all day. There were no less than 67 offsides calls in the first drive alone. According to the finger-pointing I saw, it seemed like Samford was doing something weird because the Bulldogs almost scored a touchdown solely on 5-yard penalties alone. But then they fumbled like they seemed to do all day.

Auburn’s offense then went right down and scored, despite multiple incompletions on deep passes due to the elements. But then they had a field goal blocked and had to punt on the subsequent drive, which led us all to believe that Samford was going to surely win!

Then almost everybody but me left. I watched the halftime show while eating delicious pretzel bites in the concourse. Auburn officially announced the retirement of Nova to, and I’m serious, probably 100 people sitting in the stands during the break. Then it was time to go find a seat I won’t afford anytime soon.

When I sat around then 40-yard line on the Auburn side, I was one of five people in the section. The starters came out for the first drive, and it was apparent what Gus wanted to do. He wanted to get one more touchdown from the starters before taking them out. Bo threw a bomb that was just out of reach of a diving Shedrick Jackson, and Auburn had to punt. But after year another Samford turnover, the offense got a short field and a quick touchdown. 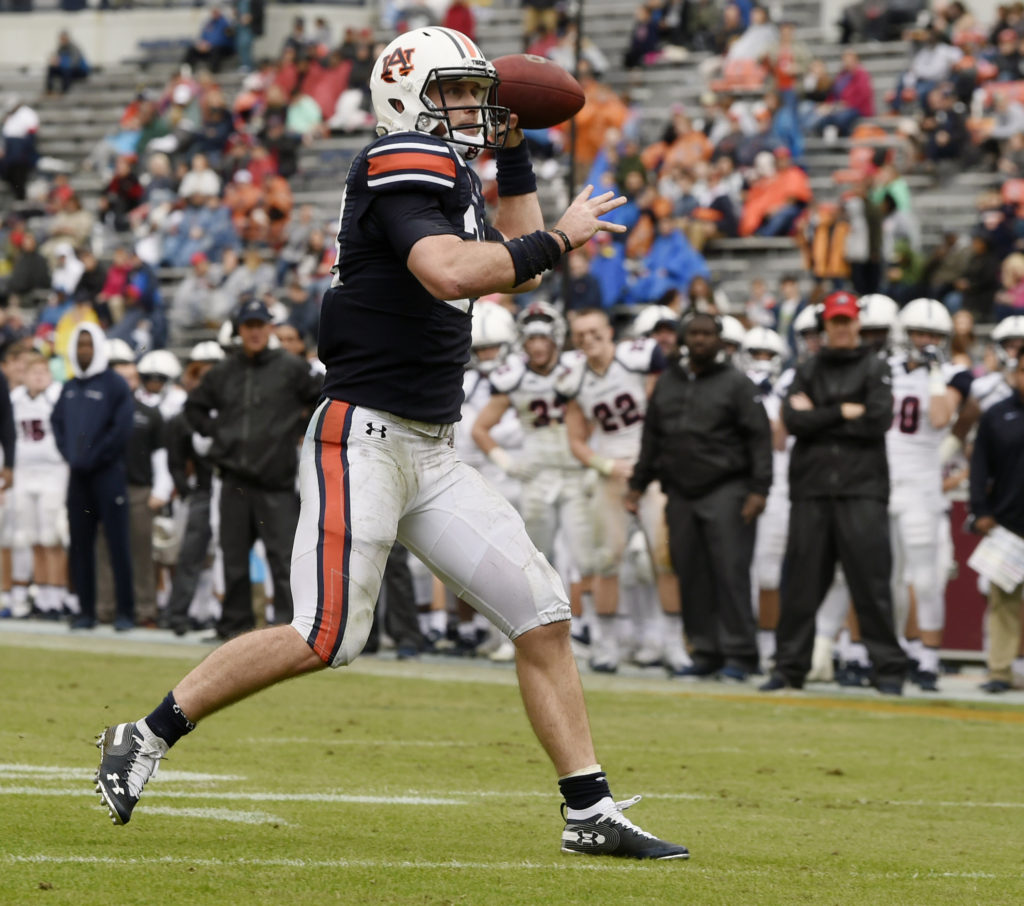 From then on it was the backups. Cord Sandberg came in and ran the offense well. He has wheels and made smart reads. He threw two touchdowns to Zach Farrar. One of them was a dime. If things happen and Cord had to play, I wouldn’t be that worried. He’s older than everybody and that accounts for something.

All in all, it was a perfect game for the situation. The weather could’ve been better, but the sun was out by the end of the game. Nobody got hurt. Jamien Sherwood has to sit out the first half of the Iron Bowl because of an awful targeting call, but otherwise, things went smoothly.

Auburn now gets the full week off from school, so they can focus on practice, turkey, practice, and Alabama. The Tigers are 8-3, can ruin Alabama’s season, and can end the season with a better record than anybody predicted.

It is now Iron Bowl week.

A Quick Look at the 2013 Post-Spring Depth Chart

Virginia Fans Not Too Peachy About the Chick-fil-A Bowl