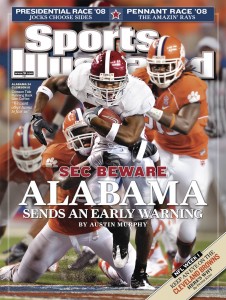 So let me get this straight: for the next hundred years, regardless of the final regular season record, and regardless of how wrong the preseason poll obviously is, anytime Alabama beats someone in what is considered in impressive fashion, we’re going to consider them “back” and give them a magazine cover? This is more than a joke. I cannot believe how stupid it has gotten…wait, actually I can. We all know that somehow the stupidity level is not at it’s highest. I’ll just say this: sure, Alabama whooped Clemson, but once again for the 50th year in a row, Clemson is hugely overrated, overhyped, and full of “talent” that doesn’t seem to perform.

Rational ‘Bama fans will hate the idea of this magazine cover, but we know how many of those there are. The worst thing about it is that this isn’t a regional publication. This isn’t the latest publication by the Bammer-ham News. This a national magazine, a company that has thousands of sports stories to write about, but twice in the last three years they have had a cover showcasing Alabama and telling the world that they are back or that we should all be scared that they slowly moved the ball up and down the field against a team that would struggle to beat Vandy on the Commodores worst day. Anyway, if you can’t get into a Books-A-Million for the next few days, you’ll know why: thousands of Ricky the Bamafans and all their kids are taking a break from the recruiting message boards to go out and buy all the SI’s they can get their hands on.

I was listening to the end of the Alabama/Clemson game the other night, and after it was over Eli Gold said something to the effect of “Welcome to 2008. The world is back spinning on it’s axis”. Yes Eli, the world has just been in a tailspin because Alabama has been an embarrassment for the last 10 years. Thank you Alabama.

This just goes to show how stupid and desparate Alabama fans, and even one of their most respected radio men are: one game, against an obviously terrible team, and that means things are back to “normal” (again assuming things can only be “normal” when you are claiming national championships from anyone who awards it to you).

Also, if you haven’t heard it already from the Bammer-ham News or from any other Birmingham media outlet, Alabama picked up another 5-star commitment yesterday from linebacker Nico Johnson. Go ahead and give them another Natty C-ship banner. If it’s not already obvious enough that he’s drinking the over-hype Kool-Aid, here’s a direct quote from Nico’s loving older brother:

“He wanted to go to a school that pretty much is locked in to contend for a national championship,” Michael Johnson said. “Why not go to Alabama? The game the other night was awesome.”

Thank you Michael. Shouldn’t you be worried about your gold shoes instead of influencing your brother to go to a school after one game? And about the “locked in to contend for a national championship” thing, let’s worry about beating directional schools from Louisiana first, or heck even winning a game against an opponent who should actually be ranked would be a good start.

Oh, and apparently Alabama doesn’t have another game until their matchup with Georgia in 4 weeks. All over the radio, the “educated” people from the “University” are claiming this will be the game of the century and whatnot. Georgia could be 3-1 and maybe even 2-2 by then, but if Alabama somehow slips up and beats them, will they make “We Beat a Team That Used to Be Ranked #1 T-shirts”, or go ahead and add a another patch to the 12 National Championships letterman jackets that I’ve seen roaming around the backwoods of Birmingham? I heard they were going to fly in Jesus for the kickoff, but Prothro beat him out.

See you bitches in November

This is too funny. So does this mean that come Iron Bowl time Auburn will sack Sarah Jessica Parker Wilson 11 times and completely embarrass the tide? Bama can praise themselves all they want now, but when SEC play comes around it’ll be a different story. I’m sure they already have “Chik-fil-a Kick Off Classic Champions” rings already made.

Taking a page from the Leon Fletcher playbook, let me say that I agree with you on two points.

• Clemson was overrated and over-hyped, and never the ninth best team in the country — they got that distinction from the voters because of the bizarre obligation voters feel to put the best team from every BCS conference (in this case, the ACC) in the top 10. It’s one of the many reasons we shouldn’t have conferences distinguished as “BCS” and “non-BCS.” But I digress.
• Alabama being on the SI cover feels more than a little over the top.

Here’s what funny about you guys, however (and by you guys, I mean you and the people in your commentary): as recently as seven days ago (last Friday) Clemson was wayyyyy too good for Alabama — they were going to kill the Tide, embarrass them on national TV and make all of us who ever thought of rooting for them hang our collective heads in shame. Now, suddenly, since Alabama WON the game — and won it more convincingly than even the final score indicated — Clemson was overrated all along?
Give me a break, guys — take off the orange-and-blue glasses for a second and look around. You keep trying so hard to take everything away from Alabama — the championships, the recruiting class and now this — that you’re doing yourselves a disservice (not to mention your poor grasp of the English language, which is upsetting to someone like me).
Worry about Alabama when it’s time to play Alabama. For now, focus on yourselves and stop feeding into that “Little Brother” stereotype.

I understand your point. But come on now…. You know that Alabama isn’t a top ten caliber team yet. You admitted that Clemson was overrated. That’s our problem with this whole SI thing. Don’t drink the Kool-Aid just yet. Same thing goes for auburn. Let’s wait and see how we do against SEC teams.

By the way… As for the fake “12” national titles… has anyone ever noticed that roll tide spelled backwords is “edit llor” which sounds like “edit lore” ; )

I never acted like Clemson was a hugely inferior opponent. I simply assumed that for once Clemson might live up to the hype and would beat an inexperienced Alabama team. I was wrong and my hatred for Clemson continues to grow. Ask anyone in my posse, and they will tell you that Clemson is in my top 5 of my most hated teams. Every year they are top 15, every year they lose 4+ games. I also said in my post that ‘Bama played well, but not as well as the “irrationals” are acting. Somehow Alabama’s win coupled with Auburn’s first game passing woes has implanted a very premature swagger and cockiness back into the worst Bammers. In my opinion, Alabama is not allowed to say one word about Auburn, until they can prove that they can hold Tez Doolittle’s jock. If that happens, then the looking down at Auburn can happen, but after one game, against a terrible team, please…

Oh, and the reason this week on WarBlogle has been ‘Bama-heavy is because the level of ridiculous has been unprecedented. Believe me, once ‘Bama loses to Georgia, it will all settle down, and I’ll go back to only writing about Auburn.

And if you want goodly formed grammer, just take yo’ self to mla.org.

Bama’s Back. Took them 3 qts to score an offensive TD against Tulane. They only had 172 total offensive yds. Not that it matters, The Citadel racked up 400+ yards against Clempson today.

Yea I think it’s kinda ridiculous to get upset over poor grammar on the internet. That’s like going to the beach and getting upset because people aren’t dressed in formal attire.