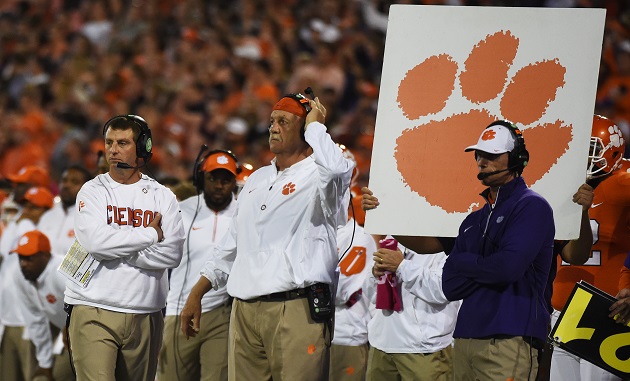 For better or for worse, you all probably know of Clemson Tom (@ClemsonTom) by now. If not, watch this and this. Clemson Tom has been labeled as Clemson’s biggest fan. Bleacher Report labeled him the biggest fan in sports for two years straight and ESPN had him on College Gameday twice. I’ve run this website for 7 years and all I got was to interview Clemson Tom. Anyway, I asked him a few questions about Clemson and Auburn and he responded. Read on.

1. What’s the first thing you and other more sensible Clemson fans think of when they think of Auburn football?

Tradition. No lake. The whole Cam Newton deal. Toomer’s trees. The eagle that flies around the stadium.

2. Can you tell me one thing that Clemson hasn’t copied from Auburn? Go on… I’ll wait.

Logos. All-In. You don’t have a lake. You guys copy more from us than anyone.

3. Besides the obvious, who are two Clemson Tigers that Auburn fans should look out for and why?

Ben Boulware, his nickname is the junkyard dog and he plays linebacker for us. He plays extremely physical. Your quarterback will know exactly who he is.

The next guy is freshman defensive tackle Dexter Lawrence. The guy is possibly the next William the fridge Perry. He’s as big as he is fast.

4. Who are two Auburn Tigers that worry you the most and why?

None of the players do. Some guy named Nate said he was gonna fight me this weekend. He looked like he has done some prison time so he kind of worries me a bit.

Honestly, you don’t have any players on your team that worried me to the least. Maybe the fact that you guys have too many question marks gives me a little bit of worried because we don’t know exactly who you are.

5. What’s the biggest positional battle that will have the most impact on the outcome of the game?

I really want to see how our defensive backs do against your wide receivers. That’s a huge question mark for us. If your quarterback gets into a rhythm and can burn our DBs, we could be in for a problem.

6. Do you feel that Dabo does put a little more emphasis on a matchup with Auburn due to his history at Alabama?

I think so, but he’s also smart enough to understand that every game counts the same. A loss is a loss, no matter who it is.

Bo Jackson. That’s it. I don’t like y’all that much.

8. What’s your score prediction and a quick analysis of this weekend’s game?

High scoring. I do you think you guys keep it competitive but I just don’t see how your defense can stop our offense. 31-27 Clemson wins.

9. Where will Auburn and Clemson end up this year?

10. After the last time you defaced Auburn property, I may or may not have done a little something with your rock. Now that you’ve done it again, can you give me any advice on other Clemson landmarks I may or may not visit?

I didn’t do anything bad or even wrong. Your own security allowed me on the field, so get mad at them. I’m not like that idiot Harvey. I have respect for other university’s traditions, I’d never deface anything.

Now that you’ve read that, Clemson Tom has promised to read the comments and respond accordingly. So go ahead and let him know what you think of him and his answers.

Clemson Tom was a lot more reasonable than I was expecting. Looking forward to the matchup Saturday Tiger bro.

Why the hell do Tigers use an eagle? # identity crisis

Go the good Tigers from the real death valley

Ps Bo Jackson was the man. Crying shame with his injuries.

So, Carl Lawson doesn’t scare you… At all?

In response to your statement that AUburn copies from Clemson. Auburn 1st Football year was 1892. Clemson 1896. So there is proof that Clemson copied AUburn.