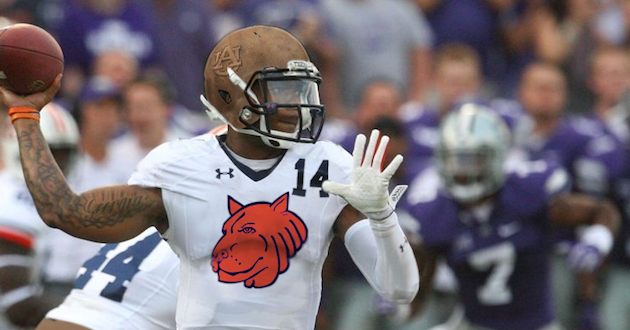 The history of Auburn’s football uniforms have been appropriately documented on this here site, ranging from drawings of the uniforms from the beginning of the program to the present, eye-opening education of orange jersey haters, and calls for Auburn to honor their history in the form of an alternate/throwback uniform.

My stance on that last one is as strong as ever, but given the lack of real prototypes, it’s hard to get people to want to see Auburn wear a look from their storied history in a present day uniform. Full length sweaters wouldn’t work too well in August. But now, thanks to @BreakOrbitLive, we can at least see something close to what a throwback would look like on a Saturday in Jordan-Hare Stadium.

The undefeated 1913 team should’ve been honored in 2013, but anytime will do. When that happens, this is what it would look like. Yes, the leather helmet is a bit much, but if you’re gonna do this thing, do this thing. 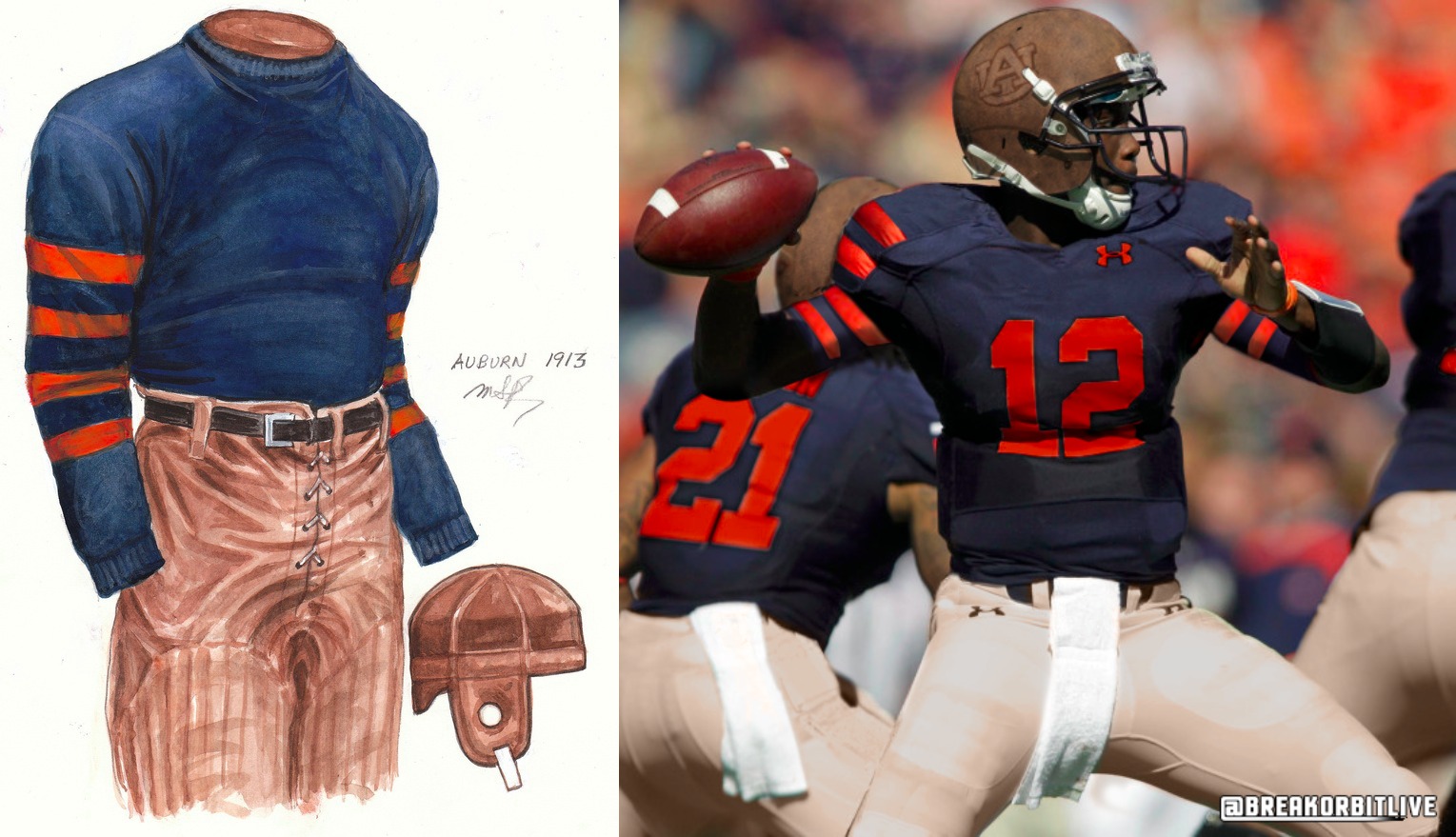 There’s a little bit of confusion on the 1929 jersey. Forever, it was tough to find a full picture of the full Tiger head jersey. Due to that, the company that gave us these drawings had to do a little guessing, coming up with the tiger head below.

But after a nice find by @PosingPlainsmen (colorized by @aubie1), we can now see what my favorite uniform in Auburn history really looked like. Yes, that team was 2-7, but it’s a tiger head. Come on. And yes, more of the leather helmet, but what about that two-toned sleeve?

And speaking of that leather helmet, tell you me you wouldn’t put this on a bookshelf next to many leather-bound books. It screams man cave. 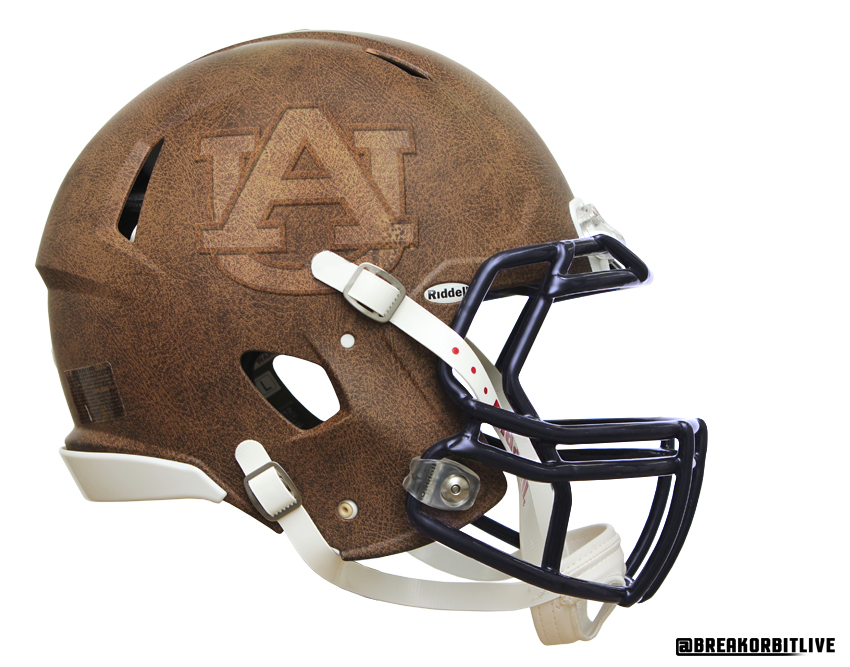 The uniform in 1932 was pretty plain and all until you took a look at the striped helmet. This would be the most bold, but you can’t beat the orange on blue numbers. 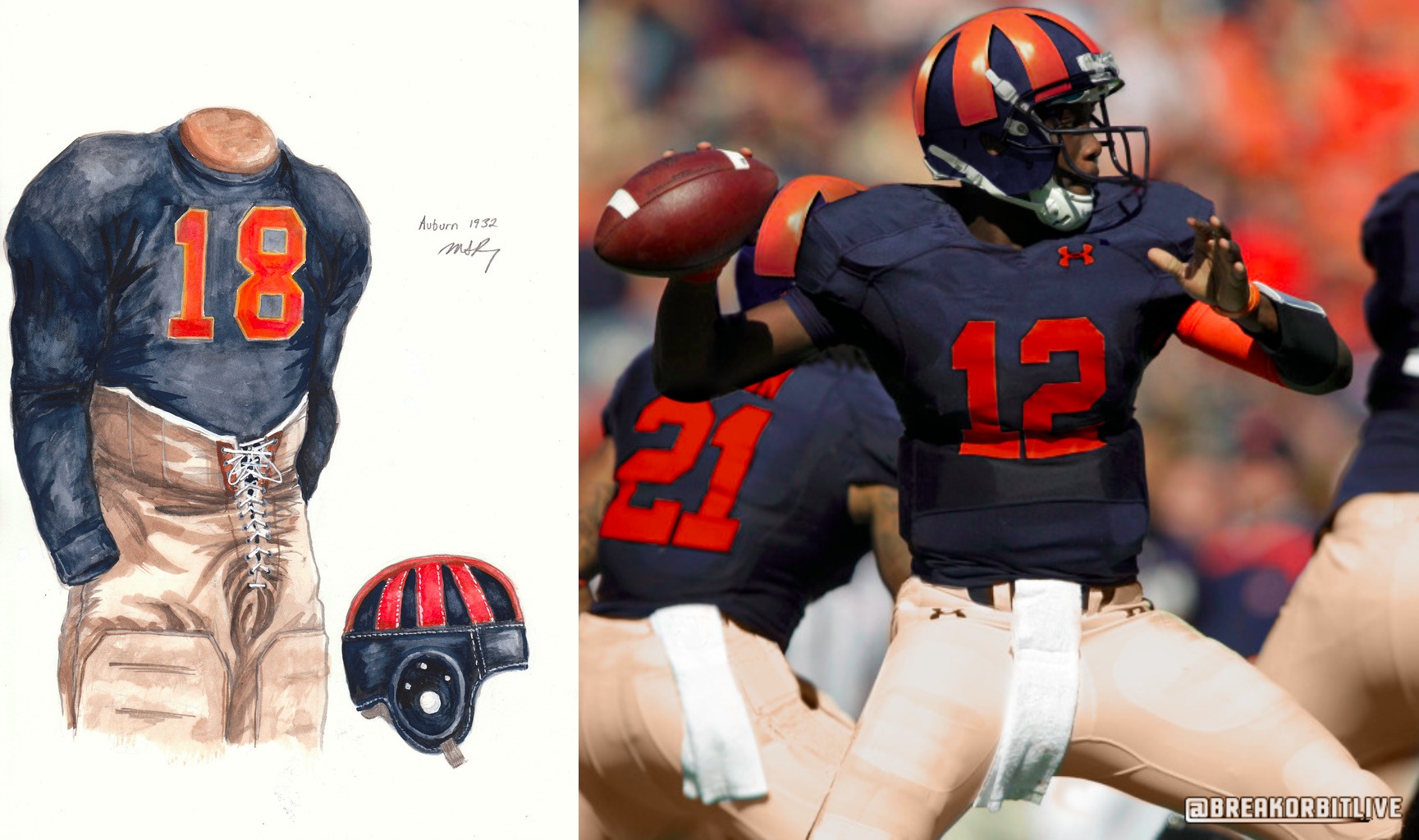 Many Auburn uniform traditionalists think that Auburn has worn orange jerseys on only three occasions, with a 1-1-1 record, back in the 70s and 80s. That is simply not true. All throughout the 40’s, Auburn wore orange jerseys with a plain blue helmet AND blue pants with an orange stripe down the side. And the blue stripes on the sleeve are killer. This uniform is specifically from 1946.

So now that we know what history could look like today, let’s forget the history we thought we knew that has caused us to never want a change of any kind, and look at the most talked about uniform changes of the last few years.

The blue helmet rumor blew up before the 2010 Clemson game, but obviously never happened. Here’s what it would have looked like if it had. 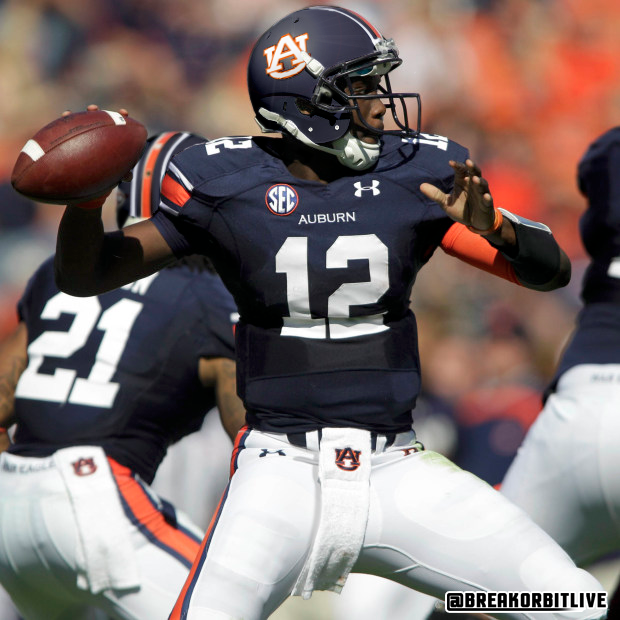 And just for fun, in the honor of the Auburn Tigers of the 1940s, let’s throw in some blue pants. 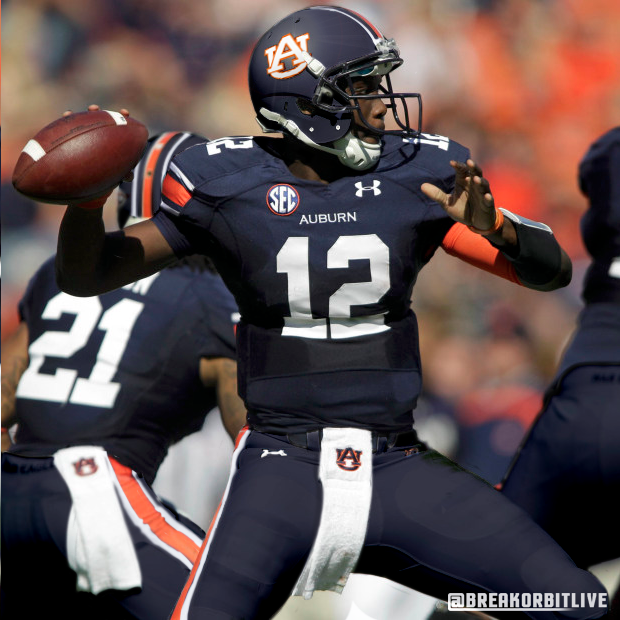 And now that we know that orange jerseys aren’t nearly as rare as most thought, let’s see what they might look like today. Of course we could just look at UT-Martin’s copies of Auburn-turned-orange. 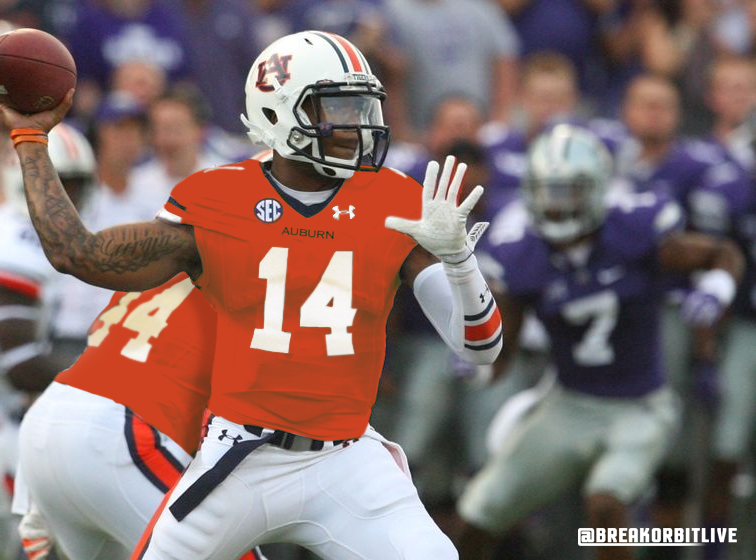 So there you have it. Auburn’s uniforms of yesteryear could be morphed into a uniform of today, and they wouldn’t look half bad. Let me know which one you think works best or if there are others you want done in the comments section.

Those orange jerseys look pretty. Hope they pull them out in the next few years, we’ve been waiting for awhile now. I think it would be cool to see an orange helmet, the blue doesn’t work for me

I think blue helmets with blue pants and white jerseys would look nice. Similar to what UGA has done with black helmets previously.

And those orange jersey aren’t too shabby!

The orange jersey looks awesome. The blue helmet looks awful in my opinion. The first two throwbacks look cool too, I actually like the leather helmet look (in the context for which they would be used). Too bad we have to wait for all of the old AU dinosaurs to die before we will even think about ONE alternative uniform for ONE game. The people that freak about about this are dumb in my opinion.

my favorite is the very first one pictured. i love everything about it!

I want to see something a little less dramatic like the Orange facemasks from the 80’s..

I would like to see some of these throwback or alternate uniforms at least once a year. If not at home, why not wear them in the kickoff classic type games and against LSU on the road?

I like most of them except the tiger head one. Bring on the orange jerseys

The bottom one, just an orange jersey once ever two or three years…

Great Ideas! You are absolutely right about the leather helmet – it screams man cave. Auburn should order those in mini’s right now and start fund-raising, even if they never show up on a field. The throw back uniforms would be a fun sight on homecoming, against a non-conference opponent. I like our traditional uni’s against SEC teams. War Eagle

Something’s just…off with the blue helmets imo. Idk. But I think if you took the coloring from those dark blue w/ slightly dark orange numbers and applied it to the helmets with maybe numbers on the side of the helmet instead of the AU…lol actually ironically similar to Bama’s helmets with just the #’s on each side…I bet that would look cool with those jerseys & hell blue pants for an real “blue out” fans wear blue with blue shakers.