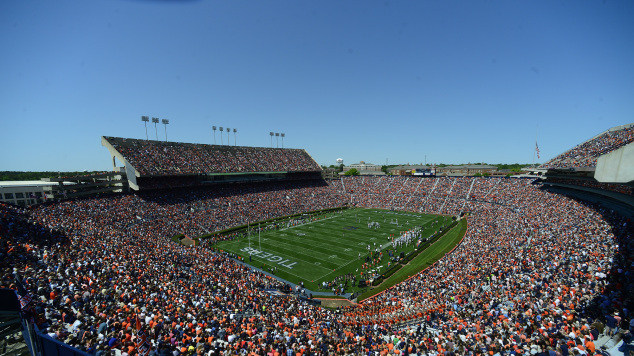 There’s no way it’s already Week 5. Sorry to say, but it is. How many days to the kickoff of the 2015 season? Is it already starting to feel like football weather for it? Season’s already over. Basketball is on the horizon.

Tennessee at Georgia – The Volunteers and the Bulldogs used to play at 2:30. Now they play in what used to be the Jefferson-Pilot game. Georgia just came off a rout of Troy and Tennessee took the week off after semi-hanging with Oklahoma. It seems like Georgia has played a lot of 11 o’clock games recently, and I picture a half-empty student section. Tennessee might have a chance, but they just aren’t that good yet.

Vanderbilt at Kentucky – Kentucky’s offense scored some points on Florida. They probably should have been the Gators. Vanderbilt somehow hung with South Carolina and took them out of the “worst SEC teams I’ve ever seen” slot. I think Kentucky will score for days against the Commodores, though.

Arkansas at Texas A&M – Well looky here, Arkansas has a pulse. Well, they’ve been able to run over some little guys. Texas A&M has yet to be really tested. South Carolina is struggling this year and that’s all they have to hang their hat on. I think Arkansas will keep up, especially with Texas A&M’s defense, but I think the Arkansas secondary will be torched.

Missouri at South Carolina – ESPN Gameday picked this game. Think about that. Missouri just lost to Indiana, and South Carolina just struggled with Vanderbilt with a blowout already on their resume. I would have picked Arkansas/Texas A&M. Even Georgia/Tennessee. Missouri is going to win to fully start the South Carolina spiral.

Memphis at Ole Miss – I remember when this game used to start the season. Then Memphis got really bad, and Ole Miss just kinda stayed where Ole Miss stays. Memphis hung with UCLA earlier this year, but UCLA ain’t nothing. Ole Miss is too much for the Tigers.

New Mexico State at LSU – This game couldn’t come at a better time for LSU. They were exposed last week. In a sense, this game makes it even worse since they don’t have a real chance to get back on track. Oh well, they can try to do that in their trip to Auburn next week. NOPE.

Louisiana Tech at Auburn – Check my preview tomorrow for my score prediction, but SPOILER ALERT: offense back on track to the tune of 50+ points.

Minnesota at Michigan – The only thing “of note” about this game is just that Michigan is terrible, Brady Hoke will be fired, and Les Miles will be their new coach after being run out of Baton Rouge following this season.

ESPN Gameday had considered Army at Yale, where I’ll be flying my Auburn flag this morning. But they chose Mizzou-SC. Anything with mizzou is boring.