Due to the game being on Thursday, the subsequent travel, the release of the iPhone 6 (that I still don’t have), a pretty good Saturday night of football games, and the fact that I don’t want to relieve the stress of the 1st half of the battle in Manhattan, I will not be rewatching the game for this week’s review. I’ll probably watch it over the next few days, but then we’ll only care about the Louisiana Tech Bulldogs, so let’s just go with the regular review with a few anecdotes from my trip to the Little Apple.

After flying into Kansas City, MO, then driving to Topeka, KS, then staying the night, then driving the 45 minutes to Manhattan, KS, I first noticed that the city that the Kansas State Wildcats call home was much like the lovely plains of Auburn, AL. There were strip malls, gas stations, and just as you rounded the corner at an intersection surrounded by pastures, there was a college campus, with a stadium that looked a little lot like a penitentiary from the outside.

Their downtown area, called Aggieville, was much better than Auburn’s, honestly. Think of what Auburn has where College Street and Magnolia Avenue meet, and multiply that by 4-5 streets. There was an old theater-turned-bookstore, a few small business, but mainly eateries and fundrinkeries. It had the feel of a bigger city since there was so much to do in a small area, but as soon as you got away from it, you were driving past the Sheep and Meat Goat Center. Yes, that was a real thing, and after eating some Kansas State student-suggested Tex-Mex, it’s exactly where we headed to tailgate.

After tailgating with what turned out to be a gathering setup by the Houston and Kansas City Auburn Clubs, we decided to head to Tiger Walk, where there was a crowd of a thousand or so. It was a nice little gathering given the day of the week and distance traveled.

When the buses dropped the players off, they had about a 50-foot walk into the locker room. The band wasn’t there yet, due to their 24 hour roundtrip, so it was a little weird, but the players were pumped. 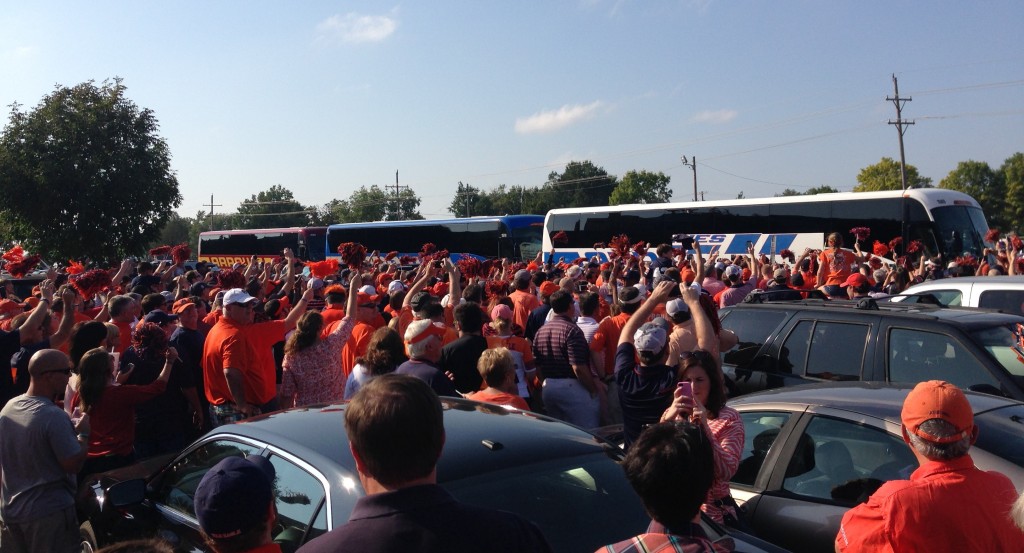 After Tiger Walk was done, we sort of milled around, not wanting to go in the stadium two hours before kickoff and not wanting to walk 20 minutes back to the tailgate pasture. As we all checked Twitter, we started to notice that the locker room door was only 10-15 feet from the entrance gate, and if you were standing just right, you could watch the guys getting dressed. I’m kidding, but a bunch of them came out and we acted like 10-year-olds that had never seen a football player before.

Gus then came out and went into another room, followed by a weasly-looking little man. I knew who it was, but I could not remember his name. It ended up being Joe Schad. Whatever went on in that room lasted only about 10 seconds. My guess is that it was Gus turning down an interview about buying Cam Newton.

Once we got to the point where we felt like early-middle-aged losers hanging around hoping to see a football player walk out of a locker room, we decided to go in the stadium.

It was around an hour before kickoff. There was no line, but the inside was packed with purple-clad students, and aside from one cool dude that purposely gave me a shoulder as I walked out of the bathroom, every person was extremely nice. Like, scary nice. Like, “am I being punked?” nice. I heard “Welcome to K-State” at least 100 times in about a 10 minute span. They were all so happy that we were there. Maybe because it gave credibility to their program? That sounds pompous, but I don’t know. It almost felt like they would have been happy to see us happy about an Auburn win.

Our tickets were for the 25th row of the upper deck. If you’ve ever been to Mississippi State, it was like that. Yeah, it’s the upper deck, but the lower deck is about half as high as Auburn’s so it’s not really up there in the stratosphere.

The 25th row of the upper deck ended up being the very top row, which was cool because, again, it wasn’t very high, and because we had a pretty good view of the surroundings, not to mention one less row of people around us.

We did happen to be the only full row of Auburn fans in that section, so the people right in front of us were Kansas State fans. One fan directly in front of us was around 50 years old or so and wasn’t wearing shoes. I do not know why.

We heard all week that the stadium was surprisingly loud for a 50,000 seat venue. I’m not sure if it was because I was the furthest away from the action you could be, but when it was time to get loud, the fans knew it. They had a few traditions like a pseudo-tomahawk chop/chant where they held up their weird hand sign and chopped their hand to a Native American sounding chant that mimicked that of the Braves/Seminoles.

They also had one of the saddest traditions in sport. By that I mean the choreographed cheer to go with each 1st down. I mean, act like you’ve been there before, right?

My level of confidence was at an all time high once I saw how the fans reacted to the smallest things as if they were a kid at a circus. It was obvious they don’t live and breathe this stuff like we do. There was no way they cared as much, therefore, there was no way they were good. Right?

The week leading up to the game, it became cool to make fun of the fact that Thursday night games away from home are just weird. I did it, too. I mean sure, voodoo is not a real thing outside the state of Louisiana, but voodoo or not, what else made Auburn’s two most sure-handed receivers look like they had eaten a big bowl of Crisco before the game?

And you can attribute the lack of the running game to a disciplined defense, but wouldn’t you say Georgia, Alabama, and Missouri’s defense were pretty sound and disciplined last year? The defenses that ended up giving 4 billion rushing yards to virtually the same offense? You don’t have to call it voodoo, or weird, or whatever, but Thursday night brings negative mojo.

The thing is that the difference in talent level between Auburn and Kansas State is large enough to keep negative mojo from taking over a whole game.

Sure, once the game started, I completed forgot that it was Thursday, but it definitely was different. If you play that game on a Saturday in Jordan-Hare, Auburn wins by 3 touchdowns. Actually, if Auburn has three less dropped balls, they probably win by 3 touchdowns that night, too.

It was a new place, a different night, a team that had nothing to lose, and a team that’s been known to hang with the big boys. A few miscues let the hype grow, and it once the offense got off-kilter, it felt like the world was ending from the top of the upper deck. But, just like 2010, just like 2013, the defense stepped up.

Great teams don’t always have to have both sides of the field playing at the top. It’s not always going to be great everywhere. Great teams have two sides that can pick up the other side when it’s not clicking.

That’s the beauty of being a great team. People, the media, the nation are always going to find reasons that you aren’t as great as you really are. That’s where Auburn is now. Relish it.

Really, this performance showed how good Auburn is. Kansas State is a good football team, and at a point in the game they had everything on there side. Yet Auburn, who could probably grade out at a C at best, still won the game and could’ve won by more in the end.

When the game was over, their fans weren’t down. We had tons of them telling us thanks for coming, and most asked if we needed help with directions. Like I said before, it was almost as if they were happy their guests were happy.

From then it was a late drive to Topeka, a morning drive to Kansas City, a flight to Charlotte, a flight to Atlanta, and a drive to Auburn. It was a fine trip. I don’t really ever have to go there anymore. But if we did, I know Auburn would win again. Sorry, nice Wildcat fans, but they would.

This Guy Committed to Auburn Today

I can’t stress enough how awesome of a tailgate was had in that hayfield. We were in the Equinox (rented) near the end of the sequence. The nice lady in the pickup had plenty of orange, blue, and purple (non-alcoholic; i’m serious) jello shots. The KC and Houston Auburn clubs had food and jello shots. A big thank you to all those that drove, because they all had a cornhole board or a beer pong table

Did you notice your brief appearance in the Instagram video I linked? I think y’all were in it really really briefly at the end of it.

Yep. I’m the dude with his back to the camera leaning against the silver Equinox.

As one of the proprietors of the Houston/KC tailgate just wanted to say thanks for the shoutout! It really was a great atmosphere and game – perfectly written. Love the blogle.

Great piece, WB,. You are the real deal. The last time I enjoyed your recap this much was your first trip to the ESPYs after the 2010 season. Perhaps it’s when you are in strange surroundings for the first time that your literary talent, sense of detail and candid “everyman’s musings” really come out in a manner that is compelling and imminently readable. I’ll go way out on a limb to say that as a rabid Auburn fan, you have an insatiable sense of adventure that is a joy to read by this rabid Auburn fans. Keep up the great work.

It was a great time, and a great tailgate! We even made it on ESPN during their pre-game rush. I have to say that we heard a few choice expletives from some folks driving by as we walked to/from to Aggieville, but everyone that looked us in the eye was pretty nice. And then 5 of us drove to Lincoln for Nebraska v. Miami, which checked off a bucket list stadium.