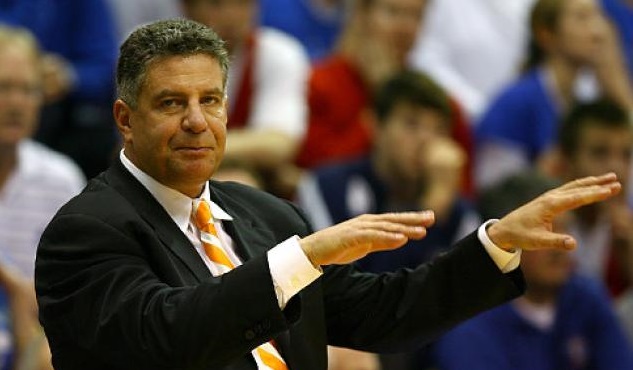 You already know this because it’s trending worldwide on just about every social media platform in existence, but Jay Jacobs has made most definitely the biggest hire in Auburn college basketball history. He has hired Bruce Pearl.

Pearl had been working as a college basketball analyst for ESPN up until last night, but after speaking with Jacobs he decided to take the Auburn job. Pearl has been a head coach for 19 seasons (Southern Indiana, UW-Milwaukee, Tennessee) and has never had a losing season. He also took Tennessee to the NCAA Tournament in all 6 of his seasons there. His overall record is 231-99. That’s legit.

Below, Jay Jacobs explains in an email sent to donors why he made this choice.

When I made the decision to move our basketball program in a new direction, I pledged to find a coach who will lead a turnaround. I promised to hire the coach who will give our student-athletes a chance to succeed on the court and in the classroom.

We found our man in Coach Bruce Pearl. We needed a leader who will bring passion and energy to our program, and Coach Pearl fit the mold better than anyone.

We found a coach who agrees with me – it’s time to win.

With this hire, the bar has been raised for Auburn basketball. Coach Pearl is a proven winner. He will work tirelessly to generate excitement for our program, and his track record says he will succeed.

As you no doubt know, Coach Pearl was removed from coaching for three years after an NCAA infractions case that occurred at his previous job.

After looking at the case and talking to Coach Pearl face to face, I am convinced without a doubt that he has learned from his mistake.

I’ve thought about this a great deal, and obviously so has Coach Pearl. I believe people who are genuine and sincere deserve second chances. If I did not believe Coach Pearl’s apologies were sincere and heartfelt, I would not have even considered him.

I believe his apology was heartfelt and his remorse is real. I believe people deserve a chance for redemption when they admit their mistakes, and that is why I hired him.

This is a great day for Auburn. I believe you will enjoy getting to know Coach Pearl, and I know beyond a shadow of a doubt that the future of Auburn basketball has never been brighter.

Thank you for your support.

This is huge. His name alone will bring excitement and players that Auburn hasn’t had in a long time. It’s also huge for Jay Jacobs. He has hired Gus Malzahn, Sunny Golloway, Clint Myers, and now Bruce Pearl in less than 16 months. That’s four of the biggest names in their game. Where are the haters now?

Highlights of Auburn’s 81-71 Win Over Missouri