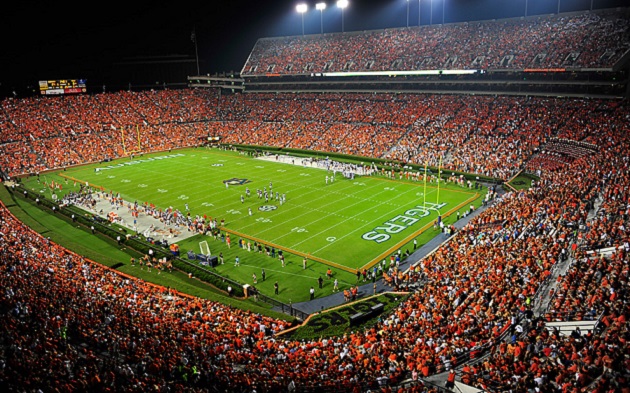 I began my freshman year at Auburn in August of the year 2000. The first football game I attended as a student was the 2000 season opener against Wyoming on a Thursday night. In his first game as a Tiger, Rudi Johnson ran wild, Roshard Gilyard decapitated a Cowboy, and Auburn won the game 35-21. From then I attended every home game during my four-and-a-half years at Auburn. That’s 34 games, ending with the 24-6 win over Georgia in 2004. During that span, Auburn went 29-5 in Jordan-Hare Stadium.

While at Auburn, I had the good fortune of meeting the future @BeautifulBlogle. After putting her through my normal screening process, including multiple drug tests and expert level Auburn trivia, I learned that her stepfather was a season ticket holder. This was enough for me to ignore the dozen or so failed drug tests and put a ring on it. 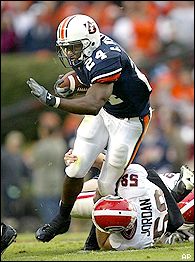 If you’re good at math, you realize that this totals 100 games, and many, many thanks to my step-father-in-law, who has written on the ‘Blogle before, I have attended them all. I have missed a few weddings, and I’ve been the only family member sitting in our seats for a few games, but I’ve seen all 100. During the entire span, Auburn went 80-20 in Jordan-Hare Stadium, with three (four if you count the current season that has two more home games) undefeated home schedules.

In these 100 games, I watched Cam Newton win his Heisman against LSU (2010),  I watched Junior Rosegreen knock Reggie Brown virtually unconscious (UGA 2004), I watched Cadillac go crazy (Alabama 2003) and score six touchdowns against Mississippi State (2003), I watched Auburn beat Syracuse after midnight, I watched Damon Duval curl a game winner between the uprights to beat #1 Florida (2001), I watched Jason Campbell connect with Courtney Taylor to beat LSU (2004), I watched a rain-soaked Jordan-Hare Stadium pull Auburn through a win over West Virginia (2009), I watched Tre Smith flip over the Gators (2006), and I sacked Brodie (2005).

I’ve gathered as much info as possible about these 100 games and run the data through my Auburn-O-Matic machine. It’s mostly records broken down in any way imaginable, and scores, and attendance, and other stuff like that. It’s a lot, but let me know if there is anything you want me to try to pull out. If you have any memories from these games, feel free to leave them in the comments section.

Since the Florida Atlantic game was my 100th straight, I decided to do something a little different. I wanted to watch one play from every section in the stadium. I started a few plays before the half, and should have had enough plays to get all 60+ sections before the game clock ran out, but since Auburn was so far ahead, the 4th quarter was basically a clock-running session, so I missed getting the East Upper Deck.

Either way, I took a picture from every section in the lower bowl (46 sections) and threw them into a GIF. So here, feel like you’re running around the stadium a few MPH slower than Onterio McCalebb.

Again, if you have any memories you want to share from the last 100 games or any other data you want me to pull, leave it in the comments. This weekend, Georgia becomes 101. Who’s up for 200?

Hey, you and I were at Auburn the exact same 5 years! :) Except for my freshman year, I spent most of my games in Section 21, above the band, with a lot of my fraternity brothers.

My memories from that time period:

* Junior Rosegreen’s hit on Reggie Brown. You could HEAR the collision in the students section, over the cheers. It was that loud. And then when he didn’t move for about 10 minutes, we were pretty sure he had been killed. I was glad to see him carried off the field still alive.

* Before the Georgia game in 2000, when Rudi Johnson was playing for AU, they played a clip from the movie Rudy of Dan Devine speech on the jumbo tron: “Nobody … comes into our house … and pushes us around.” Got the students section really fired up. We won that game in OT.

* That Syracuse game…. Man. 3 overtimes. It was nearly 1am before it finally ended. I was too tired to even go party.

* Damon Duval’s game winner that orbited Haley Center first before going through the uprights to knock off #1 Florida. And then tearing down the goal posts afterwards!

* Jason Campbell’s ultra clutch 4th and 12 pass in the 2004 Auburn-LSU game, and the resulting missed extra point, wait, no, penalty, then re-kick extra point to win the game. That was when I knew 2004 was going to be special.

* On the downside, I also remember having to go to OT to beat Louisiana Tech in 2001.

One of my most memorable moments at Jordan Hare was the 2007 season opener it was my first Auburnbgame we played Kansas State and we took a late lead and when Quinton Groves sacked Josh Freeman forcing a fumble that we returned for a touchdown it was the loudest the stadium got that night and that is something I will never forget. Such a pleasant memory of Auburn football for me

One of my most memorable moments at Jordan Hare was the 2007 season opener it was my first Auburnbgame we played Kansas State and we took a late lead and when Quinton Groves sacked Josh Freeman forcing a fumble that we returned for a touchdown it was the loudest the stadium got that night and that is something I will never forget. Such a pleasant memory of Auburn football for me

Great article and stat breakdown. That emcompasses most of my game attendance as well since my start at Auburn in ’97. Also, a north endzoner now and loved the idea of the gif. I have seen games from the 50, home, visitor, north, south, suites, and upper deck. I’ve sat through the great of ’04 & ’10 and the woeful of ’98 & ’12. Love to know there are other “fanatics” out there like myself.

Blogle, I celebrated my 100th Auburn game this past weekend in Knoxville. My first game was when I was 12 in 1993 against Florida. I’ve been to every SEC stadium (except A&M and Mizzou now) and I’ve traveled to USC and Syracuse(by car, 18.5 hours). I too keep a spreadsheet of my wins and losses when I’m in attendance. WDE!!

This makes me feel like a bad fan because it’s been so long since the last game I went to but it was also my favorite game that I remember. It was 2010 when Cam and crew decided to take back the sec and beat GA. It was crazy. It was the last game I went to and appropriately enough the auburn Georgia game this year will be the next game I attend. Can’t wait and war eagle!