For the first since I can remember, Auburn goes to Baton Rouge in a favored position. They also go as the obvious better team. This is new territory.

They lost to Troy at home, who just lost to 1-win South Alabama at home. They s’posed to be SEC. That ain’t SEC. But because the Purple Tigers beat hapless Florida by a missed extra point last week, some think that’s all they needed to get their ship righted. Naw bruh,

If this game were being played in Jordan-Hare, I have no doubt that Auburn would be 21+ point favorites. After all, they’ve only scored 44+ plus points in three straight SEC games. But because Auburn hasn’t won in Baton Rouge since I was a senior in high school (I have been out of college for 13 years), the betting establishments are being safe.

Let’s be honest, without some real stupid, Auburn should handle LSU just as they handled Mississippi State. I’m being nice. Mississippi State beat LSU by 30. Auburn beat Mississippi State by 39. But I’m not going to forget the last eight trips down there and think this year it will be some massive blowout. It should be, but I’ll be safe.

All Auburn has to do to have to turn into what it should be is hold on to the ball on offense and do exactly what they have been doing on defense. LSU’s defense is nothing like what it typically has been. It really hasn’t been to that level once all of that Saban Effect got out of Baton Rouge. 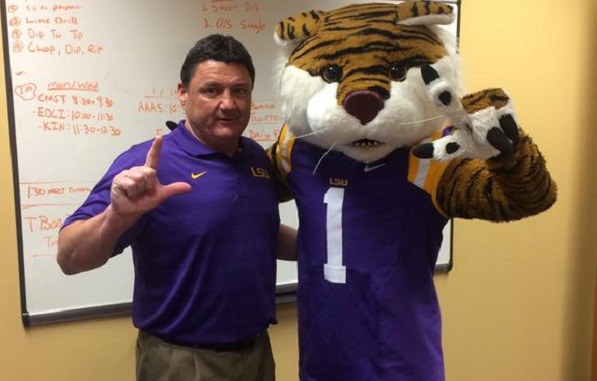 Their offense is a mess. They run the jet sweep a lot, Auburn has seen that a few thousand times. They have an immobile quarterback that this Auburn defense can eat up. It’s just not the LSU you knew.

Look, I’m getting all out of sorts just saying all the things that make LSU not that great. It’s because there are many reasons. Again, they lost at home to Troy. Troy just lost to 1-win South Alabama. Do I need to say it again?

I’ve been to Baton Rouge many times. I’ve never seen Auburn win there. I have seen the stadium empty at half time with the game close and with the game not close. These people want to drink more than they want to watch a football game, and they’ve already given up on this season. If Auburn gets up by two touchdowns, they’ll be gone.

That’s exactly what will happen. Auburn will lead 14-0 after one quarter. The score will be 28-7 at the half. And the game will essentially be over from that point on. Kerryon scores three and Stidham throws for two. Auburn breaks the streak and it won’t be close.

Everything Else from the ‘Blogler’s Trip to L.A. – Part 2

This one was on Gus. The play calling was atrocious. I never post or down my Tigers but the mediocrity is apparent. It’s time to cut bait. And by mediocrity I don’t mean the players, I mean staff. Steele should be retrained, but maybe Jay is contempt with being second to Bama consistently. It’s embarrassing at this point.

I’ve rolled with the other losses and stuck by the coach. But when does it become apparent that change is necessary? There needs to be change from the top, and after all that has went on lately with softball and basketball how much negativity do we really want to continue to read about Auburn? Auburn is my school and and I’m ashamed to say but I am done with the current administration and staff. LSU was a winnable game and looked like a blow out until the play calling went from trying to win to trying to preserve the lead.