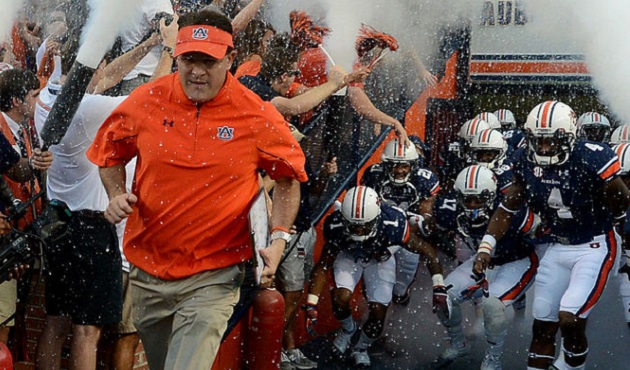 I’m especially hateful in the predictions this week. I don’t know why. Predictions have been going well. Against the spread has been not. Maybe that’s it. Right now my predictions are hitting at a 86.6% click, but my against the spread picks are less than half. Not good. Probably better than yours, though. No? Well prove it.

Georgia State at Alabama (-55.5) – Ha ha. You won’t play Samford or UAB, but you’ll give money to a school from the state of the Georgia. Ha ha. Good one. Ha ha.

Georgia (-10.5) at Tennessee – The line for this one is a tad low when you first look at it, but you have to remember that Mark Richt is very Tubervillian at times. He’ll win a big game against LSU and then struggle to beat a team he should slaughter. Tennessee barely squeaked by South Alabama so he should be good in this one, though. EA Sports is on crack…

Kentucky at South Carolina (-21) – Connor Shaw got hurt last week, but will be back. Kentucky has been slightly better than I thought they’d be, but that’s not going to matter in this one. 21 points is about right, though.

Missouri at Vanderbilt (-1.5) – Whoa, Missouri is undefeated and an underdog at Vanderbilt? Well technically, they are undefeated with zero SEC wins, and the home team gets 3 points in the spread, so on a neutral field I guess Mizzou would be favored. Either way, I don’t think Vanderbilt is any better than last year, and I do think Missouri is slightly better. Last year Vandy won 19-15. This year Missouri will win. Slow down EA…

LSU (-9.5) at Mississippi State – Everybody wants this to be a big game and maybe even upset. It’s the Dan Mullen hype machine in full force again. Everytime Auburn or LSU or Alabama comes to town, they make this huge push to make it some electric atmosphere. It’s almost like they are more excited about the team visiting their cow pasture than the actual game or their own team. I’m not 100% sold on LSU being elite like everybody made them before going to Athens, but they should have zero problem with Mississippi State… electric cowbells and all.

Arkansas at Florida (-11) – Arkansas lost to Rutgers and then hung with Texas A&M for a while. I’m not sure what to think about that. I know Florida is meh and playing with a young’n at quarterback. Home field and Arkansas being Arkansas should be enough for the Gators to get the win.

Ole Miss (-2.5) at Auburn – Check my game preview tomorrow for thoughts on this game, but EA Sports has Auburn losing this one and dropping to 2-3 on the year. Yeah, EA’s on crack.

South Alabama at Troy (-3.5) – South Alabama could have taken Tennessee to overtime last week. They’ve also already beaten Bobby Petrino. Just wanted to make sure you knew that. Troy is more of a complete and real, established team than the Jags from Mobile, but it’ll be interesting. This could be a real rivalry one day.

Georgia Tech at Miami (-4.5) – I guess Miami is pretty decent this year? I guess Georgia Tech is slow and methodical (boring), but can’t score in the red zone (according to that one game I watched last week)? Miami has more firepower than the Jackets and should win in front of a 1/4 full stadium.

Arizona State (-5.5) at Notre Dame – Notre Dame ain’t good. I still don’t like Arizona State because of the game they stole from Wisconsin earlier this year (not like I like the Badgers either). I think the Sun Devils who are wearing flame-laden helmets will kill the Irish. Not the race, just the Notre Dame football team.

Washington at Stanford (-7.5) – I used to like Stanford. I thought it was cute that the smart school was good for a year or two and all that (I’m completely the opposite about Vanderbilt). Now I’m kinda tired of them taking up a spot in the Top 10. Is that wrong of me? Washington’s coach could be USC’s next coach. After this game, USC may not want him.

Ohio State (-7) at Northwestern – ESPN’s Gameday will be at this game, making everyone think this game will be good. Nothing about the Big Ten and their tall grass and their easy schedules and their top heaviness is good. Nothing. Urban wins another one. He ain’t nothing but a winner… against soft competition. Never beat Auburn, either.

Clemson (-14) at Syracuse – What is this? Why would this be a game? And wow that’s going to be a lot of orange. Not like Clemson vs. Auburn with Auburn fans wearing their new-fangled Tuberville-era orange. This is like really orange versus really orange. Clemson wins handily.

Now use all of the knowledge you just gained and go make your picks (or if you real fancy, do it real at SportsBettingOnline.ag). If you’re not taken directly to the group after you login/register, just go to the groups link and search ‘warblogle.’ Remember, each week is separate. If you missed last week, no excuses.

“Be aware that Clemson-North Carolina State is tonight, so be sure to get that pick in.”

EA seems to be favoring Tennessee a lot…

I always look forward to your “EA Sports is on crack” game, cracks me up every week