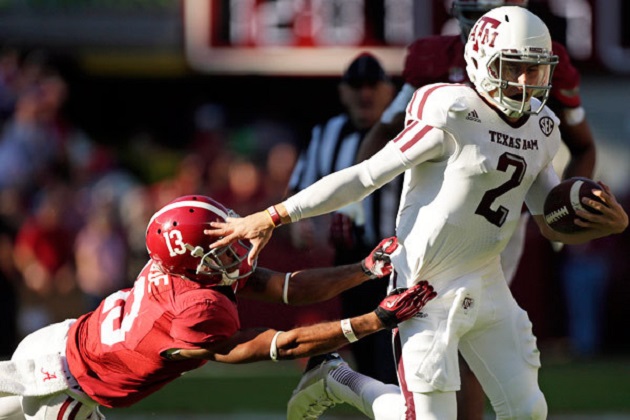 I don’t know if you’ve noticed, but some of my predictions this year have been pretty spot on. What’s new really? Not bragging or anything, but you can’t hide accuracy. Get on the train, follow me on PickOrPlay.com, and make good predictions. Oh wait, that whole part is against the spread, which I’m not very good at it., but if you want to know somewhat, sorta, kinda what the score will be, then read on.

Louisville at Kentucky – Oh wow, this is going to be bad. This is going to be really, really bad. Bridgewater and Dyer might score 100 points a piece. Well, maybe not that much, but a lot. EA Sports is on crack.

Southern Miss at Arkansas – At first glance you think this might be a rout. Then you remember Arkansas was trailing Samford entering the 4th quarter last week. Southern Miss is still struggling from the Ellis Johnson project, but they’ll keep it close for a bit. EA Sports is on crack.

Alabama at Texas A&M – This is a win-win really. On one hand you get to see Manziel lose a football game. On the other hand you get to see Alabama lose a football game. Of course, one is a lot better than the other, but does it really matter? As we’ve seen the last two seasons, it does not. I’m torn on this one, but I just don’t think Manziel has the mental fortitude to win a game like this right now.

Tennessee at Oregon – That 2-0 start was fun while it lasted Vols. Oregon is going run wild over Tennessee and think it means something. This will be the 3rd high-profile non-conference loss for the SEC this season. We’re dead. The reign is over.

Vanderbilt at South Carolina – What a boring game. South Carolina does nothing for me. I don’t care how good they may be. Vandy does even less. The ‘Cocks will put the Dores back in the East cellar where they belong, so that’s good, but I won’t think twice about this game on Saturday.

Kent State at LSU – Oh I see, LSU. Taking a week off before them Auburn Tigers come rolling in, huh? That’s right. You gon’ need that rest, brah. Oh hey, it’s two teams that Nick Saban has coached. Wonder if they had agent problems, too.

Ole Miss at Texas – They’re just giving it to you on a silver platter, Rebs. A mid-season coordinator switch? That’s all you need to keep those darkhorse dreams alive. I don’t know, though, the Texas defense may be rejuvenated. We’ll see. EA Sports is way wrong, though. Stupid computers.

Mississippi State at Auburn – You’ll get my prediction tomorrow, but EA thinks it’s going to be a tough day for the Tigers. EA Sports is on crack.

Troy at Arkansas State – I’m pulling for the Trojans, but we’re supposed to want teams that Auburn has beaten to do well from that point forward, right? I think the Red Wolves are still probably a little better than our in-state friends, so they’ll win.

UCLA at Nebraska – Yeah, I don’t have a clue on this one yet. It takes a few weeks for the vibes to waft in from the West coast before I can get a good idea of what’s going on out there. I do know that a UCLA player was tragically killed this week. I have to think that and the trip halfway across the country may hurt their chances this week. Not as bad as EA Sports thinks, though.

Ohio State at California – Even when you get out of the weak Big Ten, you play the weaker part of the weak Pac-12. Smooth move, bucks.

I believe that Vandy / S Carolina game will be better than you think. Might be a close one.

I hate to say it… I mean I love nick Marshall’s arm and all. It’s AUsome. But I really think that if malzahn is serious about winning now, jonothan Wallace is going to have to get the job sooner rather than later. In the three or 4 plays that I’ve seen jw run, the tempo and sewing machine type execution is night and day.

Nick will never be accurate.
I’m sorry. All of you can see it.

Is there anyway a&m and bammy could play today? So that one of these espn stations can talk about anything else.

I can’t figure out the pick or play thing…..I but in my picks every week but I am still at 0%…. I need to look at it closer….cause I ain’t than bad of a picker !