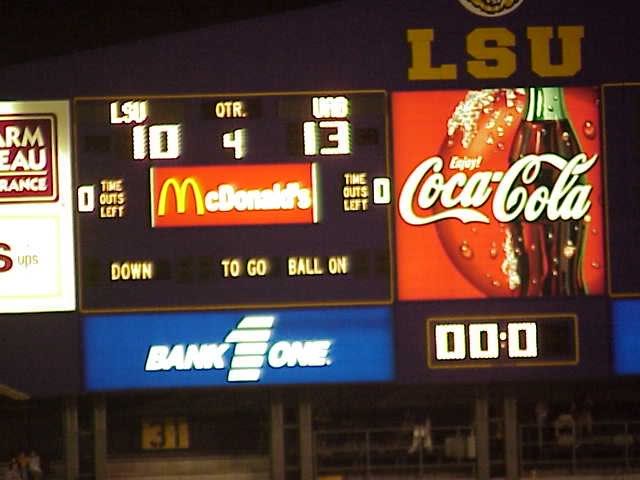 We’re now fully into the college football season, with everybody settled in to the trek through their tumultuous schedules. Oh, Alabama took a week off after playing Virginia Tech? Well everybody else is taking this seriously.

Things went pretty well last week, if you’re looking at overall record and ignoring that annoying spread thing that you have to take into account in the 2013 WarBlogle.com Pick ’em. Let’s see if it continues. By the way, I was smarter than the EA Sports NCAA 14 simulation. Stupid computers.

Florida at Miami – Miami had a lackluster performance against FAU last week. Florida did the same against Toledo. I can’t remember, is Miami supposed to be good? I’m not going to look it up. But I do think they win this one since it’s at home. Yes, there will only be 10,000 fans there, but it’s still not the Swamp. EA agrees.

Western Kentucky at Tennessee – Petrino must’ve forgotten that he’s not in the SEC anymore. Hey Bobby, you’re not at Arkansas and you didn’t get the Auburn job, you’re at Western Kentucky. You get to play cupcakes, otherwise known as your conference rivals now, and nobody will fault you for it. He’ll beat Tennessee just to get the PL’s riled up again, and EA has them 2-0 just like I do.

Toledo at Missouri – This game will be a little misleading once it’s over. Do I think Missouri is better than Florida? No. Do I think they will beat Toledo worse than the Gators did. Yes. EA seems to think the Rockets are for real, though.

Alcorn State at Mississippi State – The line for this game on PickOrPlay.com is Mississippi State (-43). I know we’re talking about Alcorn State, but did Vegas watch the Maroons last week. They scored 3 points. I know it was Oklahoma State, but since when is the Big 12 known for defense? They’ll win, but no way they win by more than 30.

South Carolina at Georgia – The Dawgs are just setting us up, y’all. They lost a heartbreaker to Clemson to keep their cred high, then they’ll lose a close one after Clowney scares Murray into a corner. And then they’ll win the next 10 games to make it back to Atlanta. That’s Richt. That’s Georgia.

SE Missouri State at Ole Miss – Whenever I think of the most cupcake sounding name ever, SE Missouri State is the one that comes up. Every time. It’s just so directional and state college at the same time. Ole Miss will throttle the <looks up mascot> Redhawks. The line is 50 by the way. 50.

Samford at Arkansas – Little ol’ Samford beat a FBS team last week. Sure it was Georgia State, but it was one of the 8 FCS wins over FBS teams last Saturday. Pat Sullivan will roll into Arkansas, throw his allegiance behind Gus and the no-huddle, and send Bielema cowering into a corner. Sadly, it won’t be enough, but it won’t be as bad as EA thinks.

UAB at LSU – Before Nick Saban lost to UL-Monroe at Alabama, he lost to UAB at LSU. It’s actually the only time the two teams have met. Think about that. UAB has a winning record over LSU and Nick Saban, Jehovah, was part of it. LSU will even up the series as Les Miles shows Saban how it’s done.

Sam Houston State at Texas A&M – There is no line on this game (which is why it’s not part of the pick ’em) because it’s going to be that bad. What Vegas should do is put a odds on how many times Manziel blows his head coach off. EA is being conservative here.

Austin Peay at Vanderbilt – I know I keep harping on lines this week, but some of these are just ridiculous. Vanderbilt is favored by 47.5 in this one. Has Vanderbilt even scored 47 points in a game before? Tennessee beat the Peays last 45-0 last week, and I don’t see Vandy doing better than that. EA is on that Commodore wagon, though.

Arkansas State at Auburn – I’ll give my thoughts on this game tomorrow, but EA’s prediction is about what I think will happen. In their simulation, Nick Marshall went 13 of 26 for 203 yards, with 4 TD passes and 2 INTS. Mason ran for 100+, and Uzomah and Reed caught two TDs a piece. I’ll take that.

Because the Texas A&M game is not in the pick’em and because Alabama is off, we need two games to get to our 12 game plus one tiebreaker format, we’ll do these national games as well. I used to call them “Other games that might tickle your fancy.” What was I thinking?

Notre Dame at Michigan – The Irish didn’t do anything too spectacular against Temple last week. Michigan blasted Western Michigan. I’ll take the home team and the team that blasted somebody. EA wants an Alabama-Notre Dame rematch.

West Virginia at Oklahoma – Oh yeah, this is a conference game now. That’s going to take a while to get used to. No idea on either of these teams, but West Virginia is a long way from Norman. That should be the deciding factor. EA is on crack.