It’s just like Christmas anytime the official football roster comes out, isn’t it? No? Just me? Well anyway, it was officially finalized today. Not like you care or anything.

There are quite a few notable (scholarship) additions to the Fall roster with shiny new numbers. There are also a few older guys that the number they were wearing just wasn’t doing it. After last year, I say they all swap numbers.

Here’s the list of the n00bs with the older guys marked with an asterisk (*): 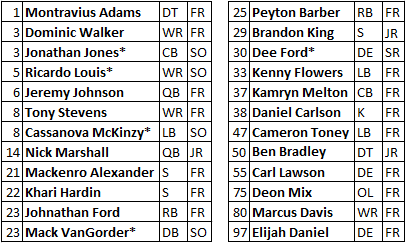 Alright, wasn’t that fun? It means football is here. They have jerseys with numbers on them. It’s like getting your new Aubie lunch box before the first day of school.

And that is everything you would ever want to know about numbers on Auburn football players’ jerseys. Fall practice officially starts tomorrow. It’s here. Real football is here.

Video of Auburn & Vanderbilt in the 1955 Gator Bowl

Georgia Gameday Button: Rub Their Noses In It

I had noticed earlier today that 16 was free, but the roster has been updated again to show that it belongs to one Tucker Tuberville. So the only free numbers are O-Line numbers. I suppose those could also be D-Linemen, but those numbers are no fun. Part of the fun of college football is having non-OL players wear any number they want outside of 50-79.

True, but about 25 numbers are taken up by scout team members that will hardly ever dress out. Give them a duplicate.

When I saw Adams was wearing #1 I got excited. That is going to be extremely fun to watch.

I had always assumed it was like Christmas for everyone when the roster came out. My wife corrected me on that last night by simply rolling her eyes.