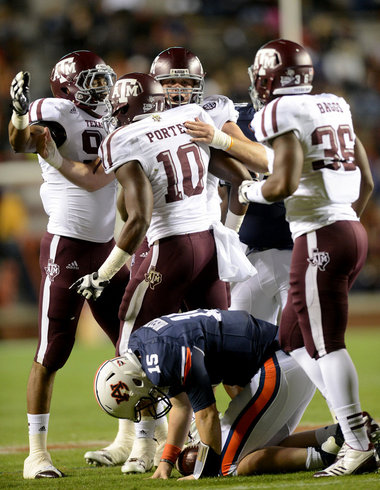 I sit in the North end zone of Jordan-Hare, and watching the holes open up for whoever was running the ball for the Aggies was like watching The Ten Commandments. It got old quickly, but I stayed to the end and watched every play. I tend to do that to myself to make me appreciate the wins more.

I used to hate the nickname “Johnny Football” because I wanted to know why he got the distinction. Now we know. But I don’t think we should call him “Johnny Football.” After Saturday night, I think we’re required to call him daddy for at least a week.

I don’t mind Texas A&M head coach, Kevin Sumlin. He seems like a nice guy, and he knows how to run an offense. They have the best offense in the SEC after only one year in. If they take a few steps forward on defense, they could easily move up to the upper echelon of the SEC in just another year or so.

Jonathan Wallace and CJ Uzomah were humongous bright spots for the offense. Yes, by the time they showed their stuff, the Aggies were up by 35+ and were playing with backups, but that doesn’t take away the touch Wallace had on his passes and the running through and around people ability of Uzomah. I’ve been on the Kiehl train all season, but right now you have to start Wallace, especially this next week in what should be an easier game.

All year, I’ve been saying that the powers that be, whoever they may be by the end of the season, should/probably will keep Chizik one more year as long as he makes some changes on the coaching staff. Saturday night, I wasn’t mad. I can’t be mad. I just felt like Chiz knew, the coaches knew, the players knew, and the fans knew that a change might have to happen. It almost felt like it was just a given at that point. Sometimes things are unfixable, and it’s time for something new. That’s not my call, so we’ll see.

The day started terribly with my tailgating truck being dead and then with me forgetting all sorts of stuff for the tailgate, but nothing was as bad as what I saw that night. I did, however, come away feeling slightly optimistic with a few pieces of the offense. Wallace looked like he can actually be a real quarterback in the SEC. That’s really all Auburn has needed all season, and since one hasn’t shown up until now, everything else has gone downhill.

Maybe, just maybe, Auburn can use this next week against New Mexico State to get some guys healthy, and find the guys that are going to lead this program next year and beyond. At this point, that is the most important thing Auburn needs to do. Find some leaders.

The one good thing about our current situation is that things can only get better.

If Gene is in Auburn in Janurary my booster check won’t be.

Becuase that’s exactly what we need…more people boycotting and not supporting our team.

It’s irresponsible to support a man who’s got no control over his team and apparently has no ability to evaluate or develop talent. Gene is not a good man or a good coach.

P.S. I personally know Coach Chizik and he is a good man!

Someone has been watching too many political ads lately….

I agree with you blogle. I don’t think they fire CGC. But CSL, CJG, and CMP maybe let go though.

I have heard that Coach Chizik and Coach Trooper had a falling out with each other, because Trooper wanted the OC job and Chizik didn’t hire him for it. So now, Trooper, and Coach Luper who supports him, are causing drama and adversity on the team with the coaching staff and players.

Trooper is awful at his one, very specific job; why on earth would he think he’s capable of running an offense in the SEC?

That also could give Danny Sheridan reason to say this…

We all know that Sheridan make up stuff.

Well said Blogle. I sure hope they don’t bail on Chizik yet. That has been done to too many good coaches over the years in the SEC. Yes, this is a VERY hard season to take, and yes there needs to be changes, but you don’t dump a coach because of 1 mediocre season, and 1 terrible one. Give him a chance to turn it around. If he can’t turn it around, then OK he has to go, but give him time to overcome.

I get truly upset when I watch every week. Not mad but ill almost like watching my friends do something that will hurt themselves but not being able to stop them! I only hope that we, as AU faithful, will get a voice through whatever those channels are to be heard on the next HC. Hire someone with winning experience not a man that interviews good. Thank you GC we appreciate the title but we need a coach that improves his recruits not slows their progress down. WDE….please move in a direction of w proven winner.

Excuse me, we as fans have one single way to have our voice heard, money. Like it or not the best way to show displeasure is to stop sending money, if I write a check it’s almost as if I am sending in my vote of confidence.

I’ll be writing a letter instead, and I know I am not alone, vote with your wallet, I love my team enough to do what I can to push this disaster of a coaching staff out and right the ship.