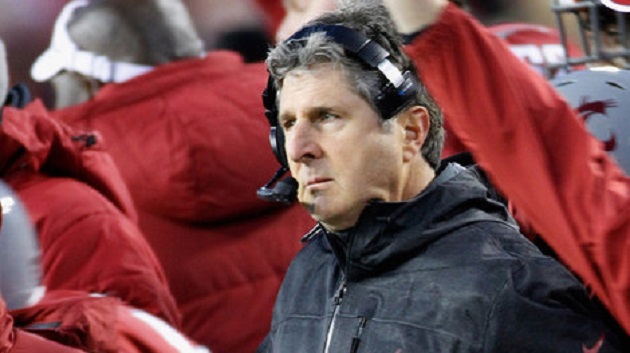 Tim Huddleston joined us back in July as we started our Summer edition of the Other Sideline. He returns with just two days to kickoff to give us updates on all things Wazzu. Tim graduated from Washington State in 2003 and began writing for WSUFootballBlog.com in January of 2011. He now lives in Sedro-Woolley, WA and can be found on Twitter @Huddlestron.

1. Has anything changed since we last spoke? Any new defections/injuries?

Remarkably, things look pretty good on the injury/dudes getting kicked off the team/academic disqualification front. It’s hard to tell with injuries because Coach Leach refuses to talk about them so I don’t have much to offer there.

One guy, Rahmel Dockery, quit the team and that made waves among Coug fans. He was a highly touted local recruit, but had yet to contribute in his career and wasn’t very high on the depth chart.

As a fan base, we’d grown to expect offseason bad news so the quiet has been nice.

2. I see your coach released a depth chart earlier this week, any major surprises?

The big surprise is that a true freshman was listed as a starter at one of the inside receiver spots. River Cracraft came in with minimal hype aside from a sweet name, but the stories about him in fall camp were very positive. That said, nobody really imagined him having a starting role. The Cougs are very deep at receiver and plenty of guys will play, but seeing a true frosh on top of the depth chart was still surprising.

3. Speaking of your coach, what’s it like having a guy who’s tweeting about MLB managers a week before the first game?

It comes with the territory with Leach. The fan base pretty quickly embraced his off the wall approach to media relations. His interviews are nothing if not interesting. The rumor/running joke is that it’s actually Mrs. Leach running the Twitter account but who knows.

People don’t worry too much when Coach Leach is talking about pirates or Geronimo or whatever. It’s when players get called out or he tells the media they’ll be banned if they report injuries that our fans get uncomfortable. Ultimately, dude has to win games and we can be fine laughing when he’s weird.

4. Who are two guys that showed out in camp that surprised you and may surprise Auburn fans?

The aforementioned Cracraft is one. The other is Destiny Vaeao. He’ll be starting at the position called the Buck in our defensive. It’s essentially an outside linebacker, but sometimes the job is to stand up and drop in coverage. Sometimes he’s a down lineman with pass rush or edge responsibilities. That’s all well and good for someone in the typical mold of how you’d envision an OLB. Destiny, though, is something like 6’4″, 290. So that’s pretty interesting.

If there’s ever an indictment on the previous coaching regime, it’s right there. Recruiting on the offensive line was a mess under Paul Wulff. At the same time, if there is ever a position where walk-ons may flourish, it’s along the line (late bloomers and all). At least that’s what an optimist will tell you. We all acknowledge that much of the success of this season hinges on the o-line improving. Gunnar Eklund was a very pleasant surprise at LT last season, Joe Dahl is actually a transfer from Montana who had a year in the program last year and impressed the coaches. The best offensive lineman looks to be Rico Forbes who missed last year to injury. A lot of question marks to be sure, but we’ll see.

6. Now that Wazzu fans know that JUCO QB Nick Marshall is starting, what’s the feeling? More or less worry about the game?

I’m personally more worried because Marshall sounds like a stud. A lot of Cougar fans have been talking about his high number of turnovers at the JC level and how it’ll be his first start. That strikes me as a way to find a silver lining.

7. How many WSU fans do you expect to make the trip? For the record, I really like the WSU fanbase, from the traveling flag to the guy who gave me his cooler as a wedding present in 2006 because he couldn’t take it back on the plane.

I’m not sure on a number, but I get the sense that plenty of my fellow Cougs are making the trek. What I do know is that the folks in Crimson that Auburn fans meet should be plenty nice and more than ready to tip back a beer or two with y’all.

8. You predicted this summer that Auburn would beat Wazzu 27-21. Has that changed?

Negative. I just don’t see my boys pulling this one out.

9. You predicted this summer that Wazzu would go 6-6 and Auburn would just be improved from 3-9. Has that changed?

Typically as the season gets closer, hype gets the best of me. This year is no different. Let’s go with 7-6 for Wazzu. As I’ve gotten more familiar with Auburn, I definitely think you’ll take a step up from last year. Marshall sounds like a terrific fit for Gus Malzahn’s offense and there looks to be talent everywhere. Let’s both go bowling, shall we?

I hope you’re not implying anything disparaging about the greatest mascot in the history of mascots. If it’s the name you’re not sure about, he was named after Butch Meeker, a WSU football player from the 1920’s.

I am looking forward to plying Wazzu this coming Saturday. I find Mike Leach to be a bit odd, but that is part of his overall make-up. I think that Auburn’s defense will be much more formidable than the 2012 version. I see a fun to watch game from both teams. However, with all of the talent comprised of 4 & 5 star athletes on Auburn’s roster, the team will live up to its expectations, and come away with a 38-24 win. I see the 2013 Auburn team finishing with a 9-4 or better record. I think Wazzu can post a 7-5 season, and a win in its bowl game. The best of luck to you!