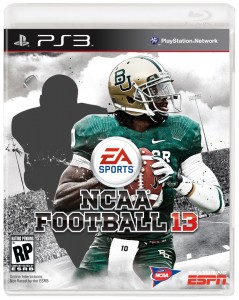 You gaming nerds out there probably know that E3 has been going on in Los Angeles all week. For you non-gaming nerds, E3 is a gaming expo where companies show demos of, preview, and promote their upcoming games, gaming systems, etc. With that, EA Sports has released their NCAA Football 13 demo, as well as the team ratings for each college football team.

For those not in the know, the team ratings are the makers of NCAA 13’s point value that they give to each facet of each team. It’s basically a rating of how good they think a team will be based solely on hard statistics. It has nothing to do with the team’s schedule, or where they think the team will end up at the end of the season. It’s purely based on statistics related to that team. A power ranking, if you will.

When it comes down to it, I almost put these ratings ahead of most preseason rankings because of the time EA Sports puts into studying stats and every minute detail to make that year’s version of the game as close to reality as possible. There is no bias (I think), or anything like that. It’s just “ok, this defense is stacked with returning talent, and they were awesome last year, so they get a 99.”

There is an overall rating, offense rating, defense rating, and a rating of prestige. These are in no way a ranking of the teams, however. That won’t be known until the game is released on July 10th. Why am I telling you this? Well, because they were pretty kind to Auburn.

Overall, Auburn was rated with a 93 out of 100 (nobody gets 100), which after you take in account tying scores from the teams above them, it puts the Tigers at the 19th strongest team in that nation and 6th strongest in the SEC. That’s not what I’ve been hearing from Phil Steele and the like…

Then again, they have Texas as a 99, which I guess may always be true, but as we all know hasn’t translated to the field. The only other team I have a gripe with is Notre Dame, but they’re probably up there for the same reason as Texas. Wait… Utah? UTAH??!

On the offensive side of the ball, which we can all agree has the most question marks, Auburn is given the lowest of any of their ratings: an 89. I have no problems with that. But I do wish that the game would update the ratings throughout the season since we know we have 50 ppg average up our sleeves.

I can’t argue with most teams that are ahead of the Tigers. Almost all of them have very explosive offenses. I am slightly surprised that USC is up at the top by themselves, but I guess the guys at EA Sports are drinking the Barkley Kool-Aid. I can’t say I blame them. What’s more American than a blonde, surfer boy quarterback? It’s like Saved by the Bell to the max (no pun intended).

Those two same teams (Texas and Notre Dame) keep sticking out to me, though. The Longhorns’ offense was awful last year and Notre Dame, well, you how they are. I guess the whole name and prestige thing (which we’ll see later) is what keeps them near the top of these.

The guys at EA Sports must love Brian Van Gorder (who doesn’t?) because they gave Auburn what has to be their highest defensive ranking in years: a solid 91. This is what I like to see, and what Auburn fans have expected to see for some time. Tons of returning starters, mixed with a great defensive recruiting class and the aforementioned ‘Stache, now has Auburn up with the best defenses in the country. Yes, this is just a video game maker’s assessment and prediction, but the perception is finally there again.

Again, Texas is at the top, which at this point is expected, but their defense is actually really strong. I don’t see why Virginia Tech is rated as the other top defense in the nation, but I’ll be honest, I don’t really watch or care to watch Virginia Tech football outside of their usual opening week loss. Seeing Auburn with the same rating as Georgia, who was near the top of the SEC in defense last year, is really nice to see because, as I said, the perception that Auburn is strong on defense (or should be) is finally back.

Finally, the prestige ranking is what all Auburn fans should be proud of. If I’m remembering correctly, Auburn was rated as a 6 last year (the highest rating) following the National Championship, and regardless of what happened in 2011, they have retained the same rating. Every Auburn fan hears all the time that they aren’t one of the elite. Well, a pretty prominent figure in sports media and entertainment seems to think so. Every name that Auburn shares the top spot with is what you would call the big boys of college football, and rightfully so, Auburn is there.

One hit on the list is Boise State. Really? They are among the most prestigious in college football? They’ve won, what, two Fiesta Bowls, the Las Vegas Bowl, and the Humanitarian Bowl a few times? Anyway, it’s not you Boise. It’s just your apologists. Maybe the Big East will get you some real prestige. <pause for laughter>

If I had to guess from the ratings, I would have to say that Auburn will end up around 20-24th in the team rankings. I guess that’s expected. Isn’t that where Auburn is always ranked in the preseason? Some of you like it. I hate it. But what are you gonna do?

Update: the rankings were actually leaked, and wouldn’t you know it, Auburn isn’t ranked. Big surprise, I know. But really, how do you have a team with top 25 rankings in all facets of the game, but not have them in the top 25? Not to mention, Auburn is the only team besides Miami (who’s one step away from the death penalty), with the highest level of prestige that is not ranked. That’ll piss you off. Anyway…

I realize I have just written an entire blogle about how a video game rates Auburn for the upcoming year, but this is important stuff people. Don’t listen to the magazine writers. Listen to the Cheeto-eating, Mountain Dew-slurping video game coders who obviously know their stuff.

So, will you be buying the game? I haven’t gotten one since 2009 because I think I played it two times. Getting old sucks.

Highlights of Auburn’s 31-28 Win Over UL-Monroe

I just dont know if i can support EA after the way Auburn has been snubbed the past couple of years. Ingram on the 2011 cover after our national championship and Cam winning the Heisman?! Then this year they once again go back to the Heisman winner without a hint of a fan vote. The only way i can hit back is to withold my $60 from them. I know it doesnt mean squat to EA, but i just cant support a company that is so obviously against Auburn.

The team and player rankings are always too inflated in NCAA. I saw some Madden team ratings today and the two highest rated teams (Packers and Pats) are an 86 overall. Lowest was the Colts at a 66. NCAA needs to utilize this broader spectrum of ratings.

@John: I too will hold off on NCAA this year. Not because it looks bad, but Madden just looks so much better this year. I usually only get one football game a year, and this year is no exception.

The Top 25 rankings that will be used in NCAA Football 13 actually just came out today. Unfortunately Alabama is #1 and Auburn isn’t ranked.

I love this. NCAA Football made me who I am today. Too bad the game costs 60 bucks.