You bet there was. Gene Chizik and his (recycled) Saturday Night Fever shirt were in attendance and the obvious reason for the Braves monumental comebacks. 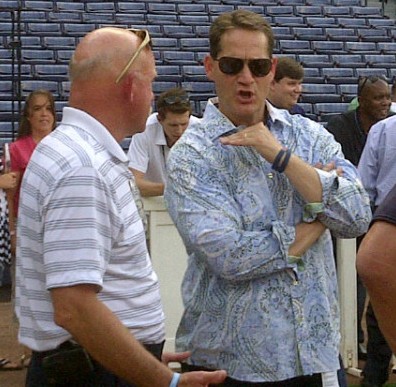 The Twitter world was all ablaze last night after @ajcbraves tweeted the picture above prior to last night’s game. It went national. People were all over Gene’s shirt. I was not. Why? Because I’m a loyal reader of the ‘Blogle and remembered that this was not the first, nor the second time that Gene Chizik has worn this beautiful monstrosity.

Last May, I posted a picture of Gene wearing this shirt as he signed National Championship footballs. In an update to that post, I was told that Gene was even wearing it that day in the drive-thru of Hibachi Express in Auburn. It’s obvious Gene loves this shirt, and anything that gets near it becomes great, if only for a few moments.

Once the game began, the Fox Sports South broadcast named Chizik the “Fan of the Game.” Here’s video thanks to loyal friend of the ‘Blogle, @radiofreeblake:

Immediately after this aired, Twitter went ablaze again with claims that Chizik was picking his nose. Come on. Who picks their nose without moving their finger at all? What kind of digging technique is that? And his finger wasn’t even in his nose. It was on the end. I’ve seen him do this many times. And now I’m defending a guy accused of picking his nose…

Anyway, they always say you can take the boy out of Florida, but you can’t take the Florida out of the boy, so I accept this shirt as a sign of Gene’s culture and heritage. But I might have to draw the line at jean shorts.

The 2015 Schedule: One Sentence Predictions

At the 50 second mark, I’m pretty sure that guy is peeing out of his mouth.

I guarantee in the pic Chizik is saying, “No doubt about it.” It’s his favorite phrase. War Eagle

CGC is rockin’ the paisleys and the Braves win. Seriously, let the man wear the shirt. It was probably a gift from a family member. I am also the child of a career military man and we missed the “style bus” ok? … mostly because Dad is always in uniform so there is no real example getting set. If we get 10 wins this season, I’m buying a shirt just like it and I won’t be alone. WAR EAGLE!

MLB loves to block some video.

War Eagle! Love the Chiz… He’s just AUsome all the way around! Love the shirt!