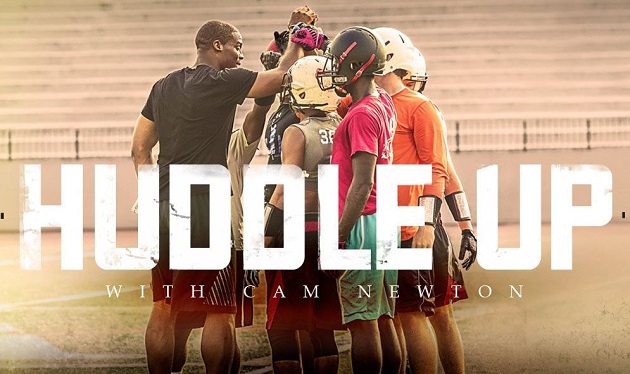 Under Armour has filmed a five-part documentary entitled “Huddle Up” that tells the story of Cam Newton. According to Under Armour, “‘Huddle Up’ is an online series that delivers an inside look at the experiences and people who have shaped Cam. From the events that almost derailed his college career to his passion for coaching his 7v7 All-Star team to the recent ankle surgery and rehab he fights through to be ready for this season. Get to know the Cam you don’t see on Sundays.” Ok, I will.

Episode 1 (“What Will You Do with Your Opportunity?”) was released today (8/5) and includes a look at his rehab from ankle surgery (at Auburn), his return to school (at Auburn), and coaching at his 7-on-7 camp (not at Auburn).

The preview for Episode 2 looks like he returns to Blinn College. That should be good. I’ll post the others as they are released.

Episode 2 (Be Humble or Be Humbled) was released today (8/12) and goes through Cam’s struggles at Florida, with an especially fun story about Urban Meyer.

Episode 3 (You Can’t Do It Alone) was released today (8/19) showing Cam traveling back to Blinn College for the first time since winning the 2009 NJCAA National Championship.

Episode 4 (It Starts When People Aren’t Working) was released on 8/26 and focuses on Cam’s training and coaching his 7-on-7 team. It shows him in Tiger Walk, too.

Episode 5 (Going Into Battle) was released on 9/2 and wraps up the 5-part series with a look at the 7-on-7 tournament and Cam’s preparation for the NFL season. Watch past the credits to see Cam and his two brothers beatboxing and freestyling.

I don’t want to get into to a lot of details relating to this game,
nonetheless they dumbed down the PC version because
Crytek was trying to have into the console market with Crysis 2.
Programming is probably the most popular and lucrative
careers a person having a computer technology
background could possibly get into. Ibuypower revolt bb372 So when deciding
over a electricity supply, do not suffocate your pc.

Most custom laptops are user upgradeable, but this must
be left approximately professionals. You can learn about the most popular gaming configurations and find out if you need them you aren’t.

I hardly leave remarks, however I browsed a few of the comments
on this page WarBlogle.com – Under Armour Five-Part Series “Huddle Up” Tells Cam
Newton’s Story. I do have 2 questions for you if you do
not mind. Is it only me or do some of the comments appear like they are coming from brain dead people?