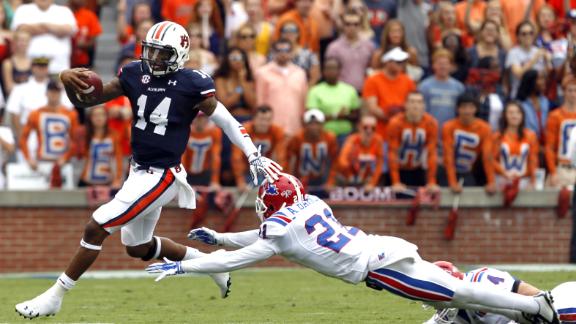 After a week off, let’s get back into the rewatch portion of the review, shall we? To be honest, I didn’t want to. It wasn’t really a fun game in person. How could it be better on tv? Auburn somewhat struggled, but was still good enough to win by 28 points. There were some big plays that made me say “yeah” but in the end it was a win over Louisiana Tech. But since the responses for these re-watches have been astronmical, I’ll do this again. For you. Lehgo.

I’d be lying if I said the offensive performances of the last two weeks didn’t bother me a little. Yes, Auburn won by a lot this week, but the bread and butter of the offense is hurting. There is no running up the middle, and then end-around that complements that is hurting, too.

Luckily, the passing game is slightly positive, and the defense is locking opponents down. I hate the old “if we play this against so-and-so…” saying because Auburn will play harder against LSU, Georgia, Alabama, etc, but it is somewhat true. If smaller, slower defenses can slow down the offense, what will a big, fast defense do?

I’m not in panic mode by any means. I still think Auburn can win every single game on their schedule. We’ve just been spoiled to see Auburn’s offense as a well-oiled machine, and right now it’s vanilla and misfiring in cases where it’s usually charging down the field. Then again, what is Gus really going to show against Louisiana Tech?

It will be fixed. Gus Malzahn is a genius. He wakes up with new variations of the buck sweep bouncing around his head. He doesn’t count sheep at night because he doesn’t sleep. He’s too busy figuring out ways to outrun the sheep.

But really, Auburn is 4-0 and real football starts this week. The corndogs are coming, and they can’t stop the run. We’ll see how Gus handles that on Saturday.

Am I the only person that thinks Corey sucks running anywhere but way outside? And that cap really isn’t that great? I needs me some roc thomas and barber. They are both better than Corey and cap

The best players are always the ones on the bench, aren’t they?

I only wonder why Roc gets in before Barber….did gus make a promise to play him as a freshman like I used to in NCAA 13 to get the 5 star recruit to commit?

I’m from Oxford, AL and saw Roc play all throughout high school, he is the real deal and his time will come. I don’t think we have seen enough failure out of Gus to question who he starts. That being said the offense has bogged down te last couple of games, but not so much different than last year right? We get a little revenge this week for the “moral victory” loss last year. WDE

I hear ya. I certainly trust this staff to play the best players. But I mean they say Corey has really improved between the tackles but I just don’t see it. He has to have nobody around on the sweep to be able to cut upfield or he falls down. RIght? I’d just like to see someone in the backfield that is a great runner (vision, speed, balance). And it seems roc and Peyton are def better runners, but cap and Corey get all the carries. I feel like it may cost us a game and that really bothers me. Mark it down- if the rb rotation stays the same , we will lose a game sooner than later, those two are not skilled enough to get it done, even with Gus and nick and the rest of the ballers we have on this roster. They are average and average will not get us through this schedule. Great blog wde

It’s impossible to say Corey and CAP are struggling while Roc and Barber are doing much better. They’ve run the ball about 10 times and not done much either. However, all the running backs in the world would struggle behind the blocking they are getting right now.

i agree the blocking is what is struggling but I want to see more Roc too. Defense is legit…finally after 10 seasons of struggling. I like this team. I think they can go undefeated or win every game on their schedule as well however they are not giving me a warm and fuzzy with the running game. Beat the corn dog eaters.

The blocking isn’t as good this year. But Corey has to run up the middle, if not its predictable what’s coming when he’s lined up in the backfield. The staff has a lot of confidence in the offense to pick up the 1st, yet sometimes it seems they may be a bit too confident. Got to keep the opposing D guessing. To me the start of this year is very similar to last year. We were definitely a second half of the season team, with LSU being the turning point. I just hope with a little more experience this year there is a different outcome.